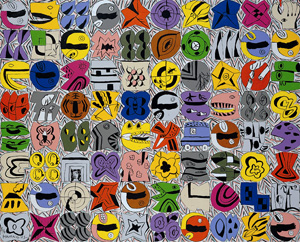 GwangJu is a city in the southwest area of Korea, known by some Europeans and Americans as the location of the first biennial in Asia. Before Beijing, before Shanghai, before Singapore, before Taiwan, there was Gwangju. The first Biennale was in 1995–a mere decade ago–and now the sixth installation is expected to open in September 2006. For those who have visited Korea’s fifth largest city, situated in the mountains near the end of the peninsula, there is the puzzling question as to why GwangJu was chosen as the site for one of the world’s important art events.

Some say that GwangJu is the culinary capital of Korea, while others say it is the cultural capital. There is no significant industry in the region, and therefore, the promotional rhetoric in the tourist brochures offers the occasional visitor a variety of esoteric cuisine and a taste of mostly ancient or folk culture. The local citizens enjoy their spicy food, including live octopus, but – as far as I can tell – they have no special interest in contemporary art. Yet, in addition to the presence of the Biennale every two years, GwangJu is important for another reason.

GwangJu is the site of one of the most courageous struggles for democracy in the 20th century. On May 18, 1980, students at Chonnam National University organized a grass-roots protest to counter the repressive government in Seoul. As troops and tanks were dispatched to GwangJu to contain the demonstrators, it was inevitable that an uprising would occur. When military forces starting rolling into the central city, ordinary people tried to block the way. As a result, troops opened fire, and within a few hours more than 600 citizens lay dead in pools of their own blood. For many Koreans—especially those living in GwangJu—this moment represents the sacrificial altar by which democracy was founded in their country.

Today GwangJu is a city filled with contradictions. While fundamentally a provincial city, it is striving to develop into a center of trade, tourism, culture, and education. This is evident in every aspect of daily life from the gentility and respect of the common people to the authoritarian mannerisms of professional bureaucrats. While the largely Christian population of GwangJu still clings to Neo-Confucian attitudes (including legal discrimination of women), the citizens believe they represent the pride and dignity of their country. In one sense, they are decent, well-meaning people who deserve to live the way they choose and in accordance with the values their ancestors have passed along. In another sense, GwangJu is geographically isolated, politically conservative, and ideologically restrained as it strives to become an international art center. Some would argue that the city lacks a multicultural tolerance, a factor that, for some, constitutes a major impediment to its growth and progress.

As with any contradictory polis, including New York and Singapore, one learns to accept the good with the bad. Yet within these urban environments—as provincial or as hip as they may be—one occasionally finds beacons of light sending out signals of hope destined to override the kind of ideological conflicts that often stand in the way of art. One of these beacons is the contemporary GwangJu painter Hwang Young Sung. In many ways, Hwang Young Sung epitomizes the contradictory nature of his city. His paintings are as logical and precise as they are intuitive and sentimental. They equivocate between semiotic specificity and deeply embedded emotional content. Even so, the balance is persistent. The spatial boundaries are interwoven between yin and yang. There is a strategy and a care to his surfaces. Every sign, every shape, every modulation of color and form is carefully considered and chosen. Hwang weighs the difference between right and wrong with each stroke. His focus and concentration have as much to do with ethics as with aesthetics. The subtle manner used in constructing his surfaces is inexorable in its cubist formality, always given to precise delimitations. Hwang’s paintings are placed squarely within the context of a conceptual determinism that suggests experimentation. His images are taken from Korean folk legends and from his own ancestral lineage. Part Buddhist, part shaman—the result of his painterly grids suggests an inventive visual language, a pictographic style that ascends beyond the trajectory of standard narratives into the realm of a peculiar tension that inhabits both a personalized cultural allegory and a nearly symphonic, melodic exuberance.

Throughout the history of this cohesive peninsular nation, one cannot ignore the communal aspect of its expression. It is less given to individual gestures and anecdotes than to an artist’s consummate view of communal life. This accounts for much of the standardization in Hwang’s grids. Communal life is part of Korea’s traditional culture. There are numerous folk legends and symbolic references to plants and animals, to indigenous flora and fauna that inhabit the mountainous area surrounding GwangJu, especially in the legendary Mudeungsan region with its dense bamboo forests, persimmon orchards, rugged terrains, and sheltered wetlands. For Hwang, this natural fecundity is the basis of culture. As in the West, nature and culture are not seen in opposition to one another, but are considered in terms of their intrinsic interrelatedness. Culture emanates from nature and thus becomes an extension of nature. In this sense, Hwang’s paintings have always been about the culture of the family living in a natural terrain, as in his recent quadrant of panels entitled “Family Story” (2005). The four oil-painted panels are not done in Western primaries, but in colors more indigenous to the cultural spectrum of Korea: pink, green, and blue—each panel representing different values and hues of these three colors.

Art historian Young Woo Lee has written about Hwang’s “candy-colors” as holding a semiotic system that alludes to the convergence of commercial pop and traditional ceremonial designs, as seen at weddings, funerals, birthdays, anniversaries, and on numerous holiday occasions. But candy-colors are not always present in Hwang’s work. He refuses to become a predictable painter. He lets go of color and retreats into stark black-and-white grids, as in another variation of “Family Story” from 2000. This single-panel, large canvas is more “conceptual” in its point-blank appearance, perhaps because of the reductive evenness by which the pictographic signs appear as a kind of abbreviated language system, in much the same way that hangul—the phonetic system of ideographs in Korea—appears abbreviated. One sees abstracted signs representing peasant life, including oxen, magpies, ducks, tigers, snakes, lightening bolts, hibiscus flowers, fish, mountain roots and bulbs, window frames, and the concentric circles that are prevalent in the designs found on village houses. Hwang was also influenced by the 500 statues of Budddha at Jeungshim Temple, in which each statue is a variation of the same image, thereby revealing “the myriad aspects of one united being.” This is not only close to Buddhism, but also important to the Neo-Confucian ethic that became dominant in Korea at the beginning of the Chosen Dynasty in 1392 A.D.

The diversity of images that Hwang Young Sung paints within his pictographic lexicon is truly extraordinary. In yet another segment of “Family Story” (2004), a large horizontal canvas is divided into 578 grid sections. The accentuation of a yellow hue dispersed within the black-and-white contours of the pictographic signs suggests a random system in which images are repeated to create a variety of syntax within the overall structure of the painting. In addition to the grid units on canvas that run through the “Family Story” series, Hwang experiments with other materials as well, including relief surfaces made of silicon, metal repousse, and stainless steel balls that resemble Christmas ornaments. In each case, Hwang subscribes to the notion of family signs and symbols, the elements that bind the larger units of the indigenous Korean household together. From a westernized point of view, one can talk about “family resemblances” in Hwang’s paintings in reference to early linguistic theory. However, in Hwang’s case, the resemblances between the signs come as much from sentiment as theory—this intuitive connection has a certain logic, but the system is not the point of the work. The system does not attempt to define itself as a tautology, but allows the content of the signs to intermingle syntactically in order to discover new meanings that are fully contingent upon their relationship to Korean history and culture.

Much can be said about Hwang’s formal authenticity as well as his structural approach to the pictographic sign. The predominance of the grid in recent years is all the more convincing in this respect. The equivocation between “candy-color” and monochrome in his construction of these pictorial signifiers is also somewhat elusive. Personally, I go less for the colors than the earth color grids. Somehow paintings like a “Family Story” from 2003 are more rare, but also more reflective of the kind of rarefied language/image that Hwang seems intent upon representing. The fastidiously articulated formality of these standardized umber images, along with their carefully proportioned consistency to one another and their overall surfaces, appears entirely convincing. But to get to the breaking point in Hwang’s evolution as a painter—from a late School of Paris style painter in the early 80s, vacillating between formal composition and variations on a theme, to a structuralist painter working with the intrinsic components of an invented picture language—begins with a trip to Mexico in 1990 from which emerged his marvelous bilateral, colorful quadrant paintings, entitled “Mexican Story.” Somehow one cannot escape the connection with “Family Story” that Hwang must have felt. In this painting he is clearly responding to the common Mexican people whose sunshine and sombreros provided a certain exuberance to their culture. Again, nature and culture were not viewed as opposites, but were understood in terms of an evolutionary correspondence. In rural Mexico—as in rural Korea—all culture emanates from the necessity to respond to the effects of nature.

I am personally less fond of the works that experiment with new materials or designer concepts than with the “conceptual” pictographs that most accurately tell the story of rural Korea. Here is the point when Hwang Young Sung dazzles the eye and, at the same moment, incites a reflective mood as to the origin of culture and language in Korea. The communal aspect of these paintings does not have to be exaggerated. It is simply there, described in every choice and every crevice of the surfaces. Yet beyond these surfaces is the artist’s supreme ability to incite thought about how a culture evolves from nature and formulates a system of communication that manages to hold the culture intact for at least 5000 years.

Robert C. Morgan is a writer, international art critic, curator, poet, lecturer, and artist. His most recent book is Clement Greenberg: Late Writings (2003). He holds both an MFA in Sculpture and a Ph.D. in Art History. He is currently Adjunct Professor of Fine Art at Pratt Institute.

While strolling through the various works of Sue Yon Hwang’s relatively modest exhibition, I was taken by an awkward mystery in the installation, an intersection between science and art that was somewhat difficult to place in time and space.

The Metropolitan’s concise retrospective—an abbreviated version of what was shown at London’s Royal Academy—presents the printmaker and painter as a merciless interpreter of his environment and its characters.