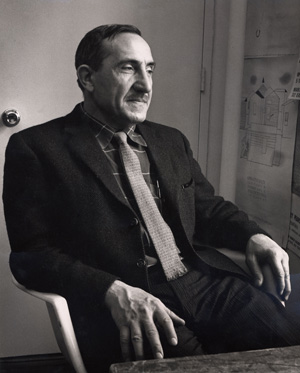 Listening to one story from one New York School artist, it is to be expected that it will be told differently from the others. Never lacking compelling and arresting narration, though undoubtedly bounded by Rashomom syndrome. But that, perhaps, is their greatest attribute and characteristic brilliance; for the Nietzchian will, utterly romantic and self-aggrandizing projection was the substance behind their creative life and work.

Similar to Herder’s notion of belonging to a group that has a certain gestalt quality, which defines one movement from another: some things are made by individuals, and other things are made by groups. Undeniably, Philip Pavia, in his selfless vision and unshakable commitment, identified with the latter, namely with the legendary Club, which he co-founded and directed during the height of Abstract Expressionism from 1948 to 1955 (the art historian and critic Irving Sandler carried it onward until 1962). The Club was both an artist’s gathering and a critical forum that gave rise to the sharing of ideas and interest. It was as much about individual concerns in taking on intensely personal disagreements as it was about lighthearted humor and comradery. This spirit is similarly reflected in his magazine It is, published between 1958 and 1964. Although there were only six issues in its entirety—with a circulation of 2000 in the first five and 8000 copies in the last, which was solely devoted to sculpture—It is is considered to be an indispensable document of American art of that period. Barney Rosset told me at Pavia’s recent memorial that when he was in Poland after the fall of the Berlin Wall in 1989, many artists there were familiar with the magazine.

Born in Bridgeport, Connecticut in 1912, Philip Pavia began his art studies at Yale, but soon transferred to the Art Student’s League. He then lived in Paris for a few years before moving back to make his permanent home in New York City in 1938. Not so distinctly apart from his artistic aspiration, which was tied to social function and utopian spirit, Pavia’s work evokes the diverse styles and pathos of his time. From the archaic-expressive heads and figures in bronze and terra-cotta to the abstract marbles that reveal the subtle differences between the formal issue, spontaneous gesture and the inherent beauty of the materials. A nearly comprehensive representation of Pavia’s oeuvre was shown in the last two exhibits at O.K. Harris earlier this year and White Box Annex gallery the year before.

I must confess it was my own invested interest in a larger governing body of creative individuals whom I feel congenial in discussing broad and inclusive matters that concern the world around us, that compelled me to visit Pavia in his studio and interview him about The Club and It is, for the Rail. (It was published in the third issue, February/March, 2001 –the Rail was a bi-monthly journal until October 2003.) I remember vividly that after our conversation, I came away with a sense of assurance and overwhelming excitement. Pavia’s legacy, aside from being a credible practicing artist among the men and women of his time, was to accommodate and fortify the power and freedom of artistic expression. He had, in turn, paved the way for me and my colleagues to march forward with our own mission. The Rail salutes the life and work of Philip Pavia, and send our deepest condolences to his wife, the painter Natalie Edgar and their two sons, the sculptor Paul Pavia and Luigi Pavia.