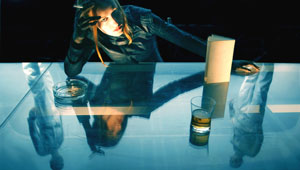 Playwright Jason Grote had an e-mail conversation with performer Erika Latta and director Ivan Talijancic, the artistic co-directors of the international theater company WaxFactory, and playwright Simona Semenic, production dramaturg and executive producer of …SHE SAID. Created in cooperation with Mini teater Ljubljana (a Slovenian NGO producing contemporary theater and puppet theater) …SHE SAID will be performed at the Brooklyn Lyceum from November 3-13, as part of the Act French Festival; for more information, visit www.actfrench.org and/or www.brooklynlyceum.org.

Erika Latta: Every show is different depending on the subject and material we are investigating. Generally we try to put equal emphasis on the elements that will make up a piece. So, the lights, sound, set or installation, text and movement are trying to coexist seamlessly. We try to distill the essence of a piece and then ask the designers and actors to riff off of this. It is important to us that we collaborate with artists who are interested in broadening their work and that we are not trying to teach a method or show a way to work.

Ivan Talijancic: With …SHE SAID, we did something different from what we usually do, in that the work with designers started much earlier than the work on the dramaturgy and the performance. It was important that we create the visual landscape which “housed” the piece, because, at the beginning of the rehearsal process, it was the only concrete element, everything else was rather abstract. So, we were working, as always, very intuitively, but the design and the use of technology was resolved earlier in the process. So, the designers were almost done at the point when we started working with performers, adapting, and making the whole piece from scratch.

Rail: What role does language play in your work?

Latta: Each piece you make speaks to you. I think we listen to this more than deciding ahead of time how the piece will be expressed. In the end we are telling a story, whether linear or not. Since we are a company that thrives on international collaboration we are fascinated with the differences of expression through language, and the similarities of the impossible nature in which we cannot communicate something that is unexplainable. With our work, we are trying to get at the unexplainable, those moments that language cannot touch. This is what keeps us investigating certain material: we look at a text, an idea, an image, we destroy it and put it back together again with everyone involved in the room. This can be difficult.

Simona Semenic: …SHE SAID is in English, and two out of three actors are American. Most of the crew is Slovenian, but three are Croatian and don’t speak Slovenian, and there are two Americans who speak neither Slovenian nor Croatian. The Slovenian crew mostly speaks all three languages, more or less fluently. Speaking more languages during the process gives us the opportunity to explore language per se and consequently to invest more into the writing process. For example, of the three languages, Slovenian is the most defining. Slovenian has, in addition to the singular and the plural, the dual, a grammatical concept which indicates two people/things. So, in English “we” stands for “the two of us” and as well for “many of us”. In Slovenian “we” is just for “many of us”, we have a different word for “the two of us”. This is just one of an infinite number of differences. In this production, Slovenian would not have been the best choice. We explicitly wanted to leave certain things undefined, as the show would lose some of its deliberate ambiguity if it was in Slovenian.

Rail: What do you hope an audience takes away from the experience of …SHE SAID?


Talijancic: With this piece, we created an open structure, we opened doors and invited the audience in, but the rest of the work happens on the level of each individual viewer. The piece can be interpreted in many different ways, so it is not complete without each spectator actively interpreting the piece in his/her mind.

Latta: There is a story in …SHE SAID, but it is told through many lenses: sound, lights, video, text, movement… and at times it is something as simple as watching the characters sleep that brings you to that story.

Semenic: It’s a story about the writer trying to conceive a piece. In her solitude she creates two persons who slowly begin to interfere with her reality. But this is not what an audience would probably take away from our show. On the other hand, saying that visual experience would be the ultimate one while watching …SHE SAID would be to simplify the experience. I think that the key of our production is actually the atmosphere that is constructed by all the elements.

Rail: How did you go about adapting Duras’ novel, Destroy, She Said?


Talijancic: Well, we didn’t adapt the novel. Rather, we used certain ideas and images in the book that haunted us, and proceeded to obsessively investigate, to understand why those elements managed to strike such a chord. There were five of us working in a room for three months in Slovenia, in the dead of winter, discussing the meaning of writing, of creating, of conflict. We used excerpts of the text from the novel, but a great deal of text was generated in rehearsals, improvised by the performers, sampled, pulled out from other materials, from interviews with Duras and other sources. We created a lot of mess in rehearsals, then we’d walk away and bring back something more structured to work with the following day. And then we’d argue about what should go where and what made sense or not. And eventually we’d find something that we kept. That was the criteria for knowing when we found the right balance.

Semenic: We started with suggestions—everybody read the book and some other of Duras texts and we proposed interesting sentences and dialogue. Ivan and I were developing the structure, which we were discussing with actors. The process was very similar to the one in …SHE SAID. The writer/protagonist is going through series of different states, professionally and personally. Mostly these moments are so connected that there is no distinction between professional and personal anymore. There is just this void, this zero point.

Rail: What are some of the challenges of international collaboration?

Latta: The differences in approach to work vary from country to country and this is always challenging. We learned that, while we bring a certain rigor and discipline to the work, it is important that we stay open to different ways, or habits, but also to trust that in the end the work will get done. We have learned that when your safety cushion goes away, you stop taking things for granted, and that is when you really begin to communicate, not in a way where things are assumed, but figured out and resolved together, right there and then. That is when a real exchange happens.

Semenic: This is very interesting for us because of WaxFactory’s sophisticated technical approach to the theater. In Slovenia, there are not many theater artists who work this way. Conventional theatre is of course not very interested in multimedia and non-governmental institutions are usually not financed enough to produce these kinds of shows.

Rail: What are some of the challenges of moving a technically complicated show from country to country?

Talijancic: We could rant for hours on this one… In the past, in transporting the set, we’ve had a bag of cocaine placed inside the truck by the border patrolmen in Italy (for dog-training purposes)… transported a set from France to Croatia through forest fires blazing on either side of the truck… had a basement of an old Roman palace where we were to perform a technologically challenging piece flooded by torrential rains one hour prior to the opening… Stopped by the “Zoll” in Germany, looking for Romanian refugees in our cargo… Shall we go on?

Rail: Have recent historical events in the Balkans affected your work?

Talijancic: I was born in the former Yugoslavia to Croatian and Serbian parents. When you come from the part of the world that gets devastated on such a scale on which it happened there, no matter where you might live at the time, it affects you. You cannot escape it. Speaking personally, I was already living abroad, first in Italy, then in the US, when the war started, and perhaps naively, or arrogantly, I thought that it did not affect me. But when I started graduate school, two years after the war had already started, and I had to generate a lot of work very fast, I took a step back and looked at the material, the plays that I was drawn to, and everything had an underlying current of destruction, violence, of conflict… Perhaps not war in the most literal sense of the word, but devastation, between people. It was a very humbling epiphany. I was completely demonized by the war, and I didn’t even know it until then. It is a wound that never really goes away.

Jason Grote is the author of 1001, Maria/Stuart, and Hamilton Township. He is writing the screenplay for What We Got: DJ Spooky's Quest For The Commons, and co-hosting the Acousmatic Theater Hour on WFMU.

Fanfared as a “celebration of music and diversity,” the Listen Festival mostly revolves around contrasting breeds of electronica, ranging from idiot-bangin’ house to the most diaphanous environmental strokings. Brussels gorges on sounds that, via different routes, are descended from dance floor culture, in all its variegated manifestations.