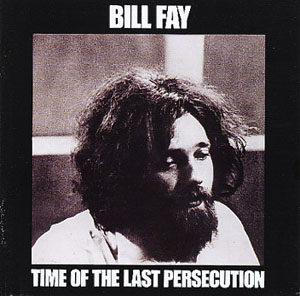 So begins the gentle but insistent folk ballad, “Tell It Like It Is,” the centerpiece of British singer/songwriter Bill Fay’s brilliant second album, Time of the Last Persecution (Decca, 1971). Like so many Fay compositions, the song hovers uneasily between serene, back-to-nature quietism and blunt, uncompromising social realism. The first time through, it sounds as if you’re listening to a multi-disc CD player repeatedly switching tracks between A Gift from a Flower to a Garden, dripping with Donovan’s naïve hippie lyricism, and the stark, angry, at times explosive tirades of John Lennon’s Plastic Ono Band. Fay’s sudden lyrical shifts are paralleled by equally abrupt changes in the music, often within the same song. “There Will Come a Day,” the calmest and most reassuring track on the recording, begins with a slow, simple pattern on piano and a cheerful trombone–trumpet duet, before suddenly bursting into a roaring, cacophonous blur of free-jazz saxophone and distorted guitar that could have been lifted straight off The Stooges’ Fun House.

There’s a method to Fay’s apparent madness and eclecticism, however. Repeated listening reveals a single, unified, and deeply personal vision of reality, and an equally singular, coherent, and compulsively engaging musical style. And repeated listening to Fay’s music is damned near inevitable for those fortunate enough to find their way to it in the first place. More than just another quirky, obscure influence for the current wave of neo-folk troubadours (Devendra Banhart, Joanna Newson, et al.), Fay’s two official studio releases, Bill Fay and Time of the Last Persecution (both originally released by Decca in 1971 and re-released by Eclectic Discs earlier this year) set a standard for lyrical invention, musical grace, and—gasp!—hard-earned wisdom that have rarely been approached in any musical genre since the albums’ original release.

Signed to Decca Records in 1967, Fay took three years to assemble the songs for his initial, eponymous album. The recording sessions, by contrast, were completed in a single day, under the guidance of first-time arranger Mike Gibbs and with the support of a twenty-seven-piece orchestra. The interplay between Gibbs’ bright, lush instrumental arrangements and Fay’s measured chording on piano and frail, modest vocals reinforces the recordings’ constant vacillation between hopeful reassurance and utter dissatisfaction with modern life. In the opening tune, “The Garden Song,” Fay announces that he has planted himself in a garden to escape from the senseless distractions of the modern world and to develop real, “lasting relations” with nature. His communal bliss is short-lived, however, as he relates in song after song the intrusions of violence and alienation into the most isolated frontiers of personal solitude. Even nature itself has become dissatisfied, unhappy, and desperate to escape the current situation. “And the moon is praying,” Fay relates in “The Sun Is Bored.” “It wants to get away to some other place. Any place.” In the midst of his bleakest observations, Fay continues to hope, and urges his listeners to do the same. “Be not so nervous; be not so frail,” he counsels in “Be Not So Fearful,” the album’s penultimate tune. “Someone watches over you; you will not fail.” Whether the “someone” in question is God, nature or the wise, benevolent singer himself remained open to debate—at least until his next recording.

Shortly after his debut was released, Fay stumbled across an old biblical commentary and quickly developed a fascination with the books of Daniel and Revelation. With the Vietnam War still escalating and the Kent State massacres in the headlines, the dark, apocalyptic tone of the ancient prophetic literature seemed disturbingly relevant. About this same time, Fay also began reading the writings of Pierre Teilhard de Chardin, a mid-twentieth century Jesuit, scientist, and philosopher, who believed that all of reality, both human and non-human, is rapidly evolving toward an eternal state of unity and peace. The earth’s present travails (war, poverty, injustice), however overwhelming they may seem, are really the birth pangs of the coming paradise—evidence of both the deficiencies of our current existence and the imminence of the world to come.

Armed with these new intellectual resources, Fay fashioned a second recording that was darker and more desperate but ultimately more hopeful than the first. Time of the Last Persecution is dominated by Fay’s vision of the coming apocalypse, vividly described in songs like “’Til the Christ Comes Back,” “Plan D,” and the bleak, bombastic title cut. Fay’s eschatology on the recording is a far cry from the Us-vs.-Them cynicism of religious orthodoxy, in which the chosen people are eternally rewarded while the rest of us are cast into a bottomless lake of fire. For Fay, as for Teilhard before him, deliverance is deliverance for all (hippie and soldier, young and old, human and non-human) from the structures and institutions that oppress and alienate us. And the coming of the messiah signifies that all of reality—however senseless it may now seem—ultimately has value and significance. “The album was a commitment,” Fay recently explained, “albeit a reluctant one at first, to the belief that there will be, and has to be at some point, some spiritual intervention in the world.”

This was a tough case to make in the age of Vietnam and Altamont, however, and the recording creaks and groans at times under the burden of Fay’s vision of deliverance. “The only time I’m not tired is when I’m asleep,” he sings on “Let All the Other Teddies Know,” confessing both his fatigue and the difficulty of maintaining his faith. “Everywhere there are angels, but we never meet.” Pushed to the front of a simple quartet of guitar, drums, bass, and his own modest phrasings on piano, Fay sounds much more like a traumatized war veteran than a blissful new-age prophet. Compare the calmly reassuring “Be Not So Fearful” on the debut album with the similarly optimistic “There Will Come a Day” on the latter recording, with Fay’s frail voice cracking and faltering as he promises us that our present sufferings will soon be over. In the end, it’s the simple, pained humanity of Fay’s performance, a stubborn but humbled voice crying in the wilderness, that makes Time of the Last Persecution such a special and (hopefully) such an enduring recording.

Decca finally dropped Fay from their roster after the album’s appearance toward the end of 1971. In the years that followed, he continued to write, perform, and occasionally record, albeit avocationally, and he still bristles (as evidenced in a recent letter to The Wire magazine) at the apocryphal speculations that he somehow “disappeared,” Syd Barrett–style, after his second recording failed to gain a popular audience. In recent years, various musicians (Wilco, Jim O’Rourke, Matt Deighton) have covered his songs. In 2003, Wooden Hill released From the Bottom of an Old Grandfather Clock, a collection of demos and outtakes from the late 1960’s, followed by the appearance of Tomorrow, Tomorrow, Tomorrow (Durtro, 2004), featuring Fay’s previously unreleased and hauntingly lovely sessions with the Acme Quartet between 1978 and 1981. And Durtro’s David Tibet will soon release yet another CD’s worth of unheard Fay material. Here’s hoping that Bill Fay’s day has finally come.

It is wonderful to be back in Reykjavik, a beloved city for me that I have visited many times—wonderful, but also strange. For the past three months Covid-19 (the Omicron variant) has been surging in heavily vaccinated Iceland. Many of my Reykjavik friends have gotten ill, some quite recently, although cases have tended to be fairly mild.