Development in "Neighborhood Brooklyn" and its Impact on Communities 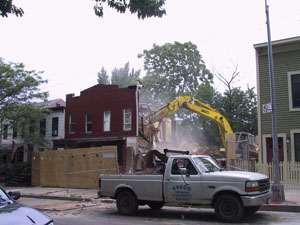 Last year, my wife and I moved from the increasingly hectic Fort Greene section of Brooklyn where we had lived for over 20 years to a country-like (to us) neighborhood block in Greenwood Heights, the South Park Slope area of Brooklyn. We had bought our first home: a tiny but heavenly (to us) two-story frame house built around 1900, with “good bones” but in need of a gut renovation.

Last September, after eight months of renovating, we moved into our new home. We spent the fall adjusting to our new life as homeowners in a new neighborhood, while attempting to balance continued renovations with running our 10-year-old graphic design business—which is based in our home, so at least we could break up concrete or paint another coat on the trim in between design jobs. The holidays came and went. We could hardly stand leaving the house to visit family and lose days where we could be sanding or polyurethaning something. By mid-January, we finally felt as if we could perhaps catch our breath a bit, relegate the DIY projects to weekends only, and begin to settle into a more “normal” life.

Then, with one winter morning’s phone call from a realtor who informed us that she had sold the old—and, in all fairness, dilapidated—farmhouse one property away from ours to a developer who was going to demolish it and build condos (and would we want to sell our house to him?), our “normal” little world changed.

We live in a city that is always in a flux of growth and change. Housing is at the top of our Mayor’s hit list and we live in a borough that in the last few years has experienced a popularity boom. Everyone, it seems, wants to live in one of the vibrant neighborhoods that make up the county of Kings: post 9-11 and priced-out expats from Manhattan; Europeans who find Brooklyn more familiar than Manhattan, as well as a better deal than Paris or London; and Brooklynites, old and new, themselves, who love their city and have no intention of retiring to the Poconos when their time comes.

Brooklyn is in the throes of construction frenzy. Some of the flurry is the rehabilitation of homes and buildings into refurbished living spaces—old schools becoming luxury apartments, old factories transforming into Manhattan-like lofts. Most, though, is the demolition of existing houses, some here since Civil War times, to make way for new development.

Rehabbing old buildings into new housing helps to sustain an existing community and perhaps improve it with an influx of new residents. Demolishing old houses—sometimes an entire half block of them in one fell swoop—creates space for more modern and simply more housing. But it destroys established neighborhoods with what has proved to be mostly out-of-scale and non-contextual new buildings. Multi-unit and multi-floored, these buildings of condominiums bear the moniker “luxury housing” (how can it all be “luxury housing”?), demanding high price tags and leaving little to no room for moderate-income residents and a void for those of lower income. The two-family house—owned by one family, who rents the second or basement floor to another family—is becoming a rare species, when it used to be the staple of housing in our borough.

That January sale of the oldest house on our block at a shocking price, double that of any akin house ever sold in the community, started a domino series of events that culminated in the same developer buying three more houses on our block; the produce warehouse owner on the huge corner lot deciding to become a developer instead of a vegetable salesman; and a dozen other properties on adjacent blocks being suddenly sold by scared and money-enticed homeowners and purchased at ever-higher and exorbitant prices by known and not-so-known Brooklyn developers.

These developers, like those in all of New York City’s boroughs, are tearing down house after house, ones very much like the one we just renovated, to make way for multiple family buildings of “luxury condos”: Condos that no resident in the community can afford. Condos bought by a new influx of people that will triple the population of a block (that’s on our side of the street alone); tax the city’s infrastructure of utilities, sewers and schools; and change the fabric of our neighborhood permanently.

Our quiet, bucolic block will exist no longer.

As Mic and I began to react to what was happening in our small section of Brooklyn, we quickly realized that it was not only our neighborhood that was about to radically change, but our sister neighborhoods of South Park Slope and Sunset Park as well. While we were comforted for a brief period of time by learning that our specific area of Greenwood Heights and the South Park Slope (15th Street to 24th Street, 4th Avenue to Prospect Park West) was in the process of a rezoning study, we knew that we had to do more than wait patiently for the rezoning to become law, a process that would take many months more. The backhoes, container trucks and bulldozers lining our streets certainly would not be waiting patiently.

With the help of other local community groups, our community board and local residents, we formed the Concerned Citizens of Greenwood Heights: a local advocacy group supporting responsible and contextual development in our neighborhood. We founded our group at first thinking we were dealing with a localized phenomenon, but soon learned that we were part of a larger struggle: to preserve Brooklyn and all of its neighborhoods. We have mobilized and educated our neighbors. With other community groups, we have marched to development sites in protest to out-of-context and irresponsible building. We have created “House Not for Sale” signs that neighbors have put on their doors and in their windows to send a clear message to developers, realtors and any who view our homes as dollar signs.

Our voices have been heard and the issues discussed ad nauseum, but is anyone really listening?

While we are confident the rezoning ULURP will be approved by City Council by the end of November, there is a larger problem at hand. Developers, the majority of which do not live in the neighborhoods they prey upon, who are buying up properties at above market rate prices to inevitably “cash in” on the sales of their new “luxury” residences, will still be at work. Rezoning, while protecting smaller communities from large, out-of-scale developments, will not stop developers from moving to the next “underutilized” community, to quote Elan Padeh of The Developers Group, nor stop their predominantly negative impact on the social, economic and architectural landscape of Brooklyn.

We were asked by the Rail to write about what has happened in our community due to the impact of new development, the rezoning of our area and what the future may or may not bring for our neighborhood. While our specific community may no longer be under siege (or under controlled siege as a result of rezoning), the hell we have all been living through over the past year will continue, just one neighborhood away.

Such alliances are exploiting communities, utilizing loop holes in zoning and the Department of Buildings (DOB) building codes and working at a fast track pace that has created numerous dangerous job sites. These violation-ridden sites not only jeopardize workers, adjacent properties and neighboring residents, but the community as a whole.

The DOB, overworked and understaffed, has time and time again responded to community complaints of dangerous work sites or improper work conditions in an untimely manner or not at all. Numerous 311 complaints to the DOB go overlooked—or, when an inspector does happen to make it out to a site, actions that are clearly illegal to community observations (no protection of adjoining properties, no protection of workers, work being done at night and on weekends without a special permit, work being done period without a permit) are somehow rubber-stamped “no problem found at time of inspection.”

Rezoning will not stop irresponsible development projects and illegal demolition and construction actions from continuing. The DOB must be held accountable in policing, and, when a developer/architect/contractor is in clear violation of the law, shutting down a job site and those responsible for it. Perhaps it is too rosy a world to imagine, but the DOB could work with community activists, utilizing us as neighborhood watchdogs and “adjunct staff.” After all, we are not anti-development, but pro-responsible building, which we assume DOB is as well.

For the past 10 months, Mic and I have felt as if we are living in a war zone. Like so many households in the area, we have experienced a non-stop barrage of demolition and excavation, backhoes and trucks, dust and debris, from sunup to sundown. We can tell the difference between the sound of a concrete mixer, a container truck or a backhoe coming up our street.

We are up-close and personal in experiencing the transformation, and potential destruction, of our neighborhood. As I write this essay, looking out my home office window at the muddy pit that once was a small frame house, I wonder what the future will bring. Certainly a four-story, eight-unit building of “luxury condos” in its place. But what will the building actually bring? How will my new neighbors interpret this “changed” neighborhood? Will they even notice that there’s been a change? Will they become Brooklynites like us and our neighbors?

There’s a saying that the long-time residents of our block like to use. Given our proximity to Green-Wood Cemetery across the street, when asked if they would sell their homes for a million dollars and move elsewhere, they reply, “The next move I make is from here [home] to there [across the street].”

As we move forward, beyond the rezoning and beyond the flurry of development, before the new zoning takes place, we and our community group will evolve from reaction to action. It is necessary for us, not just Mic and myself, but our community as a whole, to challenge our elected officials to work with us to ensure that this type of wholesale destruction of communities at the hands of a few developers does not continue. Not just in our and neighboring communities, but in all of Brooklyn. A clear message must be sent, from the top down: This house is not for sale. This neighborhood is not for sale.

Brooklyn is no longer for sale.