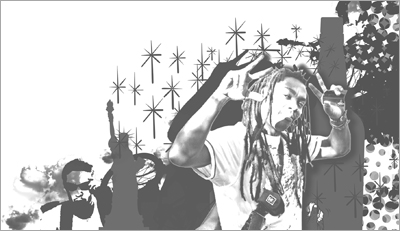 Illustration based on photos by Amy Bolger

Recall the character of Wizard in Taxi Driver, played by Peter Boyle. When DeNiro’s brooding beginner cabbie comes to him for advice, he’s met with a semi-coherent ramble, in which the following remark is stated: “A man takes a job. And the job, it becomes the man.”


Such is the way with bike messengers, young and old (who of course find both allies and fierce enemies among taxi drivers).

Old-school riders have been doing it since the 1980’s, a period unanimously considered the “glory days.” Eddie Williams (a.k.a. Fast Eddie) has been riding since 1983. He’s become a legend in the global messenger community, has recently published a book of photos called Bike Messenger Life (La Fabrica, 2004) and runs an art gallery in Bed-Stuy. He is easy to spot after-hours in Williamsburg, where he delivers food part-time on a shiny red track bike, with long dreads that cast wild shadows along the underbelly of the BQE. Eddie is no longer employed by a courier service, but he rides for a few direct clients, and speaks fondly of his first decade of work.

“I got on the bike at the end of ‘83, started riding a track bike and shit. I got hooked up with these kids from Jamaica, Trinidadians. They were the first track riders in New York City.” Messengers favor track bikes, or fixed gears, which involve a bare-bones setup that excludes extra gears and brakes, and the bikes don’t coast.

“After I saw that I was like ‘fuck it, I need to get one.’ And basically most of the messengers back then—from ‘84 until the ‘90s—were from the islands. Cats from Jamaica, Trinidad, and Guyana, they all flooded here in like ‘78. And that was the messenger scene. It was the most beautiful thing I ever seen in my life. After we finished work we would all get together in Washington Square Park. And that’s how you knew there were so many bikers. We came from all over.”

Back then, Ed Koch was successfully battling the streets’ graffiti writers, but he was set right by the cycling community when in 1987 the mayor’s office introduced the “Midtown Bike Ban.” The new law would have prevented messengers and bike commuters alike from riding the Midtown stretch of avenues such as Fifth and Madison (crucial routes for messengers). It was enforced for a few days, before an overwhelming demonstration comprised of couriers, commuters, and activists led to its quick repeal and a shift towards educational measures to address bikers’ safety.

“After we stormed the streets it was like, ‘Okay, forget it,’” says Eddie. But he is quick to mark the end of good times with Giuliani’s arrival.

“When Ghoul-iani became mayor everything changed. He had more cops, basically. And he had cops on bicycles. I had never seen a cop on a bike before Giuliani. He specifically told the cops: ‘Watch the bikers.’ Basically cops hid between cars and waited for us to run a red light, then afterwards they’d chase us down and, ‘Let me see some ID.’ Tickets were very expensive, like a hundred dollars. And you only make a hundred dollars a day.”

Tickets are still expensive: running a light or riding the wrong way costs what automobile drivers pay, and riding on the sidewalk will cost $90, if not the seizure of one’s bike. Aside from these common-sense violations, riders are often stopped and ticketed incorrectly, as police often don’t know the laws for bikes. For example, cyclists are allowed to travel in either the right or left lane on a one-way street, but are regularly ticketed for riding on the left.

Though urban cyclists thrive on the kind of solidarity that overcame Koch in ‘87, much of a bike messenger’s experience is solitary. Vittoria De Sica’s 1948 film The Bicycle Thief captured the modern urban conflict of a man’s struggle to sustain himself in the face of an impervious metropolis. New York City messengers have their bikes stolen and they cope with it in a variety of ways, often with more success than the now quaint Antonio.

When Yatika Fields, 24, had his bike pilfered from his Park Slope apartment, he spent nearly two weeks away from work. “That really shut me down for a minute. I looked at myself and said, ‘You can’t do shit; your bike’s gone; you can’t work.’ That freaked me out, because I was having a good time on the bike, being a good messenger, and I was dividing my time with that and painting, just being a good rider and a good painter.”

Yatika, who is Native American, was chosen in 2000 for an exhibition of indigenous art put on by the Asian Pacific Economic Council in Brunei, and has recently shown at the Modo Gallery in Hudson, NY. But losing his bike wasn’t enough for him to start working in a restaurant or copy shop.


“I think it’s bad to stay in one place, it’s bad for the head and it’s bad for you spiritually; it damages something in you. So I’m borrowing friends’ bikes and giving them some cash. I have some art shows that are coming up, and people have bought things, so hopefully with that money I can get a new bike, get back with the program and work, get money, and also make money from sells, if I can sell. It’s looking up. I’ve just got to keep a clear head.”

Messengers found themselves hopelessly analog in the digitally connected landscape of the 1990s. In the ‘80s it was the junk bondsmen who made them rich, with easy runs between Wall Street and the expanded financial offices in Soho. But when trading went online, messengers weren’t needed for the dirty work. They became more dependent on creative industries, particularly advertising and fashion, and began to carry bulky garment bags from dank Seventh Ave wholesalers, or reels of beta tape to Madison Ave. Their bags could be full, but with just one delivery, or tag.

Thousands of messengers left the grind of the streets for good. “Some of us stick with it,” says Eddie. “We were making so much cash; it hasn’t really set in that there’s no money. Others are like, ‘Fuck it. Let’s go onto different things.’ People went back to school, computer programming, some were doing carpentry, driving cabs.”

Messengering is at its least lucrative point in history, but the job’s urban cred is as sought after as ever: young boys and girls from smaller towns continue to be drawn by the surrounding fads. “It’s the style, and the appeal,” Eddie says. “It’s a fashion. There are people riding around with the messenger chain and the bag who aren’t even a messenger. To them it’s mad cool, but to us it was a job, you know? We had to dress like that. And there weren’t that many white kids as messengers back then. It was a lot of Puerto Ricans and [West] Indians, and mostly blacks. And then as the years went by there were a few whites that I know personally, and now it’s like the tables have turned.”

Fast Eddie does speak fondly of the younger generation of hardworking messengers, who have braved the past couple of winters and summers—equally brutal seasons on a bike—in lieu of other types of employment, either because they lack the right personality, education or connections to get another job, or simply because they appreciate the freedom being a messenger entails.

“I think it’s cool. I see kids who are the age I was when I stared. I’d like to see if they last 20 years from now. Maybe the money won’t be around. But I think we’re always gonna need messengers,” says Eddie.

Eric is also a painter, but he’s a rider first. He says the job informs his work. “In New York, history is written on the walls, it’s all over the place. And I wanted that experience, as well as the experience of working on the street as a messenger. The first week I worked here I had this thought in my head that my life is defined by negative space. If I can’t find that negative space, I can’t do my job. It’s the space I find to get through cars, to get through lights, to get through pedestrians. I have a whole new perspective on what I’m trying to portray— New York is so big. I’m trying to capture that in my paintings.”

Many of the new riders—whether they take messenger work or just the hipster credibility—are lured by the races and competitions that appeared in the mid-‘90s. Most of the street races are illegal, and negotiate with live traffic. Other events, such as the annual Cycle Messenger World Championships (which involve street closures), are sponsored by companies such as Puma—whose label has extensively branded the messenger subculture. Earlier this year the company assembled a team of New York City messengers to travel the world and race wearing Puma jerseys.

“One person who started putting the races together is Squid, [Kevin Bolger, now captain of Puma’s team],” Eddie says. “He started doing alley cats, and then it picked up in Philadelphia, Boston, and D.C.”

Alley cat races cover a course of checkpoints like a messenger’s work route. Then there are foot downs (roller derbies for track bike riders), and other competitions such as sprints, track stands (balancing acts), and skids, which expert riders can pull for 500 feet. The spirit of these events is often party-oriented—swap Schlitz for Gatorade if you want to keep up—but messengers are serious about testing their street-earned skills against one another to find out who’s fastest.

“I ride for myself now,” Eddie says. “I go in five days a week, from nine until three. I have a few clients. They keep me afloat. I can do the gallery [Nayako Gallery, 125 Ralph Ave, Bed-Stuy]. It’s been there five years now, and I’ve had maybe fifteen shows. I always wanted a gallery, because I’ve seen so many, when a gallery was a gallery—like in Tribeca and Soho, before they all moved to Chelsea. But to do a show at those places, they always give you the third degree, you know—‘Who are you?’ So by having one, just seeing my friends’ work, I’m happy to be doing something. I’ve done paintings, sculpture, book signings…There’s a show going on as we speak: it’s a messenger show,” he says. “I’m a messenger for life.”

Some eight months before the country enters the Second World War, two New York comic-book artists create a flashy super-hero who vigorously defends the United States against all enemies. In the first issue he is shown beating up no one less than Adolf Hitler.

In the Beginning, Sometimes I Left Messages in the Street

Some years ago I ran into Daisy at an opening for a group show on Orchard Street. The theme of the show was “Bad Optics” and I don’t remember much about the artwork except for a wall of small square canvases, each a painting of different yet eerily identical scenes of the backsides of cops as they swarmed someone unseen on the ground.

In this space just west of Mercer Street, Shanzhai Lyric traces the transitory and ephemeral nature of Canal Street as a site of knockoff production, dislocated trade routes, and gentrification—and the ways in which bootlegging can generate creative disruptions.

T.C. Boyle's Outside Looking In

Few living, serious novelists know more about magic mushrooms and LSD-25 than T. Coraghessan Boyle. The author of Drop City (2005) and a trove of other fiction even looks the part.