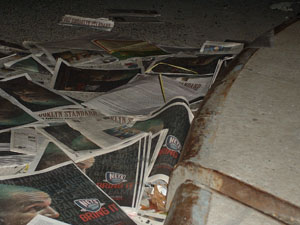 The Brooklyn Standard creates more Ratner garbage on the corner of 6th Avenue and Atlantic Avenue in Brooklyn. Photo by Brian Carreira

“Money is a terrible master but an excellent servant.” — P.T. Barnum

At a moment when it has become largely irrelevant to the approval of the Atlantic Yards proposal, the New York media has finally noticed some of the real light unfiltered by the Ratner PR projection. Namely, that there is substantial local resistance to the humongous eminent domain-dependent project as was illustrated by the turnout of opposition at the October 18th scoping hearing of the Empire State Development Corporation. And that much of Forest City’s vocal support comes from groups the developer has been funding.

Since its announcement, the Atlantic Yards, like the aesthetic of the architect responsible for its goofy facades, has always been about style over substance. The tactics pursued by the proposal’s propagandists are generally understood in terms of the money that the developer stands to gain from its completion. But never assessed by the roving reporters is why Ratner would insist on a basketball arena, or bully with eminent domain, or assemble a cadre of “community groups” to put a sunny face on the plan.

Ratner’s Atlantic Yards should have been a long shot. The plan tears down newly renovated residences and divides two thriving neighborhoods with an arena and a massive high-rise complex. Not to mention that the same man responsible for the ugly, unsuccessful Atlantic Center and the stark, lifeless MetroTech is at the helm. Yet with the MTA rail yards in his possession, and many of the neighbors in loft condos driven to take cash on threat of a state-ordered wrecking ball, Prospect Heights is inching closer to Ratnerville.

A relentless, unscrupulous public relations campaign on the part of the developer was met with a local media willing to pass along practically unedited Forest City PR and mindlessly broadcast each and every headline without properly considering its place in the overall narrative.

Take the saga of the Community Benefits Agreement (CBA) and those groups Ratner chose to participate in it. In early 2004, shortly after the announcement of the Atlantic Yards to the public, Forest City Ratner Companies (FCRC) called a meeting. According to Cheryl Duncan of the Terrie Williams Agency, which is paid by Ratner to represent participants in the CBA, the developer “invited block associations, merchant associations, precinct councils, ACORN and many others to find out about the initial stages of the project.” The groups in attendance were shown the architectural models and given “information on workforce development plans and FCRC’s record in these areas,” according to Duncan.

Although not yet involved with BUILD, James Caldwell, who would within months become the organization’s president, did attend the MetroTech event. How much the workforce development plans FCRC presented that day resembled the plan that ultimately ended up in the CBA is an open question. On the other hand, Caldwell acknowledged to The Rail in a November 2004 article that it was Ratner who presented the CBA idea to them. “We certainly didn’t come up with it,” he quipped.

If the idea for the CBA wasn’t posed by the developer at this meeting, it couldn’t have been mentioned long after: BUILD would soon be appearing in photo ops at Ratner’s side, celebrating the developer’s willingness to enter into the agreement. ACORN’s attendance also begs the question of whether the affordable housing plan, or at least an outline of it, was mentioned at this early juncture. Regardless, whether it was explicitly characterized as a “legally binding agreement” on that winter’s night in cold MetroTech or not, a presentation was made which promised enough to secure the allegiance necessary for Ratner to claim “community” support.

The Atlantic Yards CBA is lackluster by comparison to, say, the Staples agreement in Los Angeles, as was detailed in The Rail in January 2005. For one, it lacks state and city enforceability, relying on the signatories alone to police and litigate its provisions. This particular problem is exacerbated by the fact that at least two of the eight groups involved derive most of their operating budget from the developer. Also, by only enlisting ardent supporters of the project, the agreement not only closed off a large portion of concerned Brooklynites, it also ignored all but the most cursory critiques of the project.


That Ratner likely cooked up the plan for the CBA himself and presented it to local community leaders is illustrated not only by its weakness, but by its focus. The agreement is not a concession to community pressure, but an amplification of promises Forest City rolled out at the announcement of its proposal. Whether the developer ultimately intends to follow through on his commitments is yet to be determined. But it is clear that the issues discussed in the CBA are present because Forest City wanted them there to sustain its promotional claims.

When the CBA was signed on June 28th, 2005, media coverage largely parroted talking points from FCRC. That the document deferred the penalties Forest City would sustain for non-compliance into Project Implementation Plans, which would be completed in November, went unmentioned. That, in the interim, the agreement has served merely as a template for Ratner to fund his supporters has been reported without questioning the conceit.

The press recently exculpated Ratner over revelations that he funded BUILD to the tune of $5 million dollars. Hiding behind the CBA, Forest City acknowledged guilt but then bound its admission with an admonishment to those who question, noting that FCRC was merely fulfilling obligations in the agreement—and had only given the group $138,000 so far. Another aspect of these recent discoveries is the closing of the PR circuit. Now all of BUILD’s calls are fielded by the Terrie Williams Agency, where Cheryl Duncan alludes that the reason for the expansion of her assignment is that “any interest you have in BUILD is as a result of the CBA.”

The BUILD funding, as revealed in an incriminating 1023 application for recognition of non-profit status filed at the end of 2004, is a case in point of the infotainment ethos that has dominated Atlantic Yards coverage. Juan Gonzalez of The Daily News did an excellent job of uncovering this story and following it. The other papers, smelling blood, then pounced. Getting a chunk of flesh each, they were easily sated. It was all a big mistake in filing, we learned: BUILD had no basis for the number and was certainly not promised it by FCRC.

This simply isn’t credible. Even with an unlicensed lawyer, BUILD would have known they needed some basis upon which to arrive at the $5 million number. Presenting their funds as originating from one source if—as was later contended—they would receive money from a number of sources, actually makes it more difficult to be granted the public charity status which they sought: yet BUILD declared all money was to come from FCRC on the IRS form.

The very fact that BUILD’s officers reported they would draw six-figure salaries creates a great degree of extra paperwork and unnecessary headaches. Why then did they say that James Caldwell will be making $125,000 a year if he will only be paid half of that? It is plausible that $5 million, or a figure close to it, was discussed much more explicitly than either BUILD or Ratner will admit.

Deficient press coverage of the project persists. The number of promised jobs quietly tumbles from month to month. Claims that the office work will go local are repeated, even though City Councilman Charles Barron called the developer out in May, saying of potential commercial tenants: “So, those—they could hire whoever they want basically.” To which Jim Stuckey, VP of Forest City replied: “Typically that’s what happens with businesses in our country.”

Ratner continues the release of propaganda in The Brooklyn Standard, which in spite of spokesman Joe DePlasco’s charming epithet that anyone not knowing its true nature is in need of “an IQ test,” looks identical to the newspapers such as Metro and amNew York also distributed at subway stations.

All of this maneuvering is orchestrated to satisfy one man’s ego. The Atlantic Yards project is meant to be the developer’s legacy, and redemption for his other ill-conceived projects in the borough. “It would be the crowning achievement of his real ambition, [Ratner] says, which is to help bring about one of the country’s great urban renaissances,” noted New York Magazine way back in October 2003.

Forest City counts on the just-in-time media to scramble over each others’ backs to project its latest byte for public consumption. “Jobs, Housing, and Hoops”: a slogan, no matter how empty, pervades the echo chamber. The developer also understands that while the real-dealing should be kept behind closed doors, periodic bursts of “new” developments, like a well-timed Orange Alert, shift the focus away from analysis and back to reflexive headline-chasing. A massive project that requires eminent domain and demands taxpayer dollars for its completion has consequences not available in press releases.

The major New York newspapers haven’t had the energy to connect the dots, and their lethargy has been a disservice to a city that will likely be footing much of Ratner’s bill. Should the Atlantic Yards be built, and should it prove to be a “blunder” as U.S. Congressman Major Owens predicted at a rally in March 2004, some culpability certainly lies with those who take their paramount task as journalists to be first on the scene to break another Forest City press event. And as Ratner’s monoliths blot out the sun and cast miles-long shadows across the cityscape, what will the headline be then?

“Instead of call-out culture, we’re calling them in”

The Broadway Advocacy Coalition began in 2016 but, in light of continuous police brutality and calls for racial equity, has gained steam even as theaters are closed. Here, Diep Tran profiles the vital organization, speaking with two of its leaders about birthing a movement and shepherding it into transformative times.

Rebecca Solnit's Call Them By Their True Names

Rebecca Solnit’s essay collection Call Them By Their True Names deals with an America in crisis.