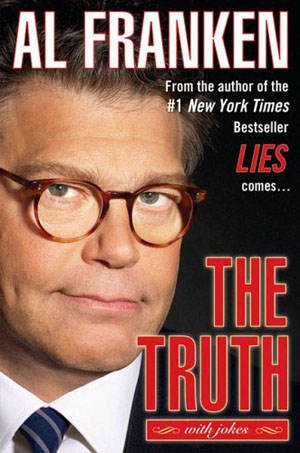 In the month of October, as the Plame Game dragged on and the hard right scuttled Harriet Miers in favor of Samuel “Little Antonin” Alito, all of the leading figures in the Democratic Party watched quietly from the sidelines. Except, of course, for Al Franken, who, though ostensibly a political commentator and satirist, actually has become a leading voice of the Democrats. Temperamentally unsuited for the sidelines, Franken is instead always in the middle of the action, mixing it up with the party’s opponents.

Broadcast daily on both Air America and the Sundance Channel, The Al Franken Show features frequent visits from leading Democratic Party insiders and delivers regular insights from the Center for American Progress, a liberal think tank established by former officials in Bill Clinton’s administration. On the show and elsewhere, Franken makes no secret of his current plans to move back to his native Minnesota. There he will run for the Senate in 2008 against Republican Norm Coleman, who, in the wake of Paul Wellstone’s untimely death, defeated Walter Mondale in 2002.
Perhaps uniquely, Franken is both a devout Clintonite and an avowed Wellstonite, a triangulating centrist and a fiery liberal. Such a position is not intrinsically contradictory, however. For example, on economic issues, Franken is both a deficit hawk (Clinton) and a militant foe of corporate corruption (Wellstone), positions which don’t necessarily cancel one another out. But on some issues—such as foreign policy, which right now means the Iraq war—it’s difficult to follow both leads. Both Bill and Hillary have remained insistently in favor of the war, whereas before his death Wellstone led the fight against it. Franken, like the Democratic Party itself, is stuck somewhere in between these positions.

Franken’s new book, The Truth (with jokes), illustrates the Democrats’ dilemma, as Franken devotes a lot of the work’s mostly non-comedic pages to a discussion of the war. Quite rightly, he is angry about the lies that brought us to Baghdad, as well as the rampant corruption and blatant mismanagement that have characterized the occupation. But, like John Kerry from 2002–2004, and the mainstream Democratic Party leadership today, Franken is not sure where to go with all his anger about the Bush administration’s handling of the war. Even as the death toll of American troops zooms past 2,000, the Democrats seem able to offer only a call, albeit a strident one, for a “better-managed occupation.” In his new book and on his show, Franken continues to fight hard for this swampy ground—which by any other name is a quagmire.

As its title suggests, The Truth (with jokes), is intended to be read as a “reality-based” book with an occasional rimshot. The title is also a lot less in-your-face than Franken’s most notable previous assaults on the right, Rush Limbaugh is a Big Fat Idiot (1996) and Lies and the Lying Liars Who Tell Them (2003). Full of far fewer personal insults against right-wing figures than the two previous works, Truth also contains far more substantial critiques of the right. While Lies achieved its primary goal—of exposing the far-right media’s readiness to say anything in support of a cause—Franken’s slams of Bill O’Reilly and Ann Coulter rested on ultimately minor points about whether the former knew the difference between a Peabody and a Polk Award and whether the latter could distinguish footnotes from endnotes. In Truth, Franken takes on the bigger lies of the Bush administration and its supporters—namely about Iraq, John Kerry’s war record, Social Security, and just about everything else.

Given the tempestuous upheavals of the last few months, the events of the first half of the first year of the second administration of Bush II now seem like ancient history. But Franken’s book quite usefully records a period that historians may someday consider to be the Bush team’s own attempt at political satire, or perhaps screwball comedy. The Terri Schiavo affair brought the lowest to new depths, with Peggy Noonan at one point saying that Democrats had taken “a low road that twists past Columbine and leads toward Auschwitz” (thus calling into question Noonan’s credentials as both a moralist and a cartographer). Franken then reminds us that in order to put the “crisis” in Social Security, the Bush leaguers invented a projected $11 trillion deficit by adjusting the current shortfall for inflation “from now until the year Infinity”; and they based their claims about African Americans being shortchanged by the system around “a study that assumed that every African-American man would live exactly to sixty-nine years of age, and then drop dead.” If the lies that W. & Co. told about Iraq had been this transparent, the war may never have begun.

But the war that won’t soon end did of course begin, and it has continued to provide a most useful weapon in the Bush gang’s arsenal. The Republicans played the war to their full advantage in the elections of 2002 and 2004. Franken confronts this fact in detail, devoting much of the first half of the book to “debunking” the notion that the “moral values issue” propelled Bush’s reelection. Instead, the war provided the basis of both the “fears” the administration stoked—about WMDs, and the “connection” between Iraq and bin Laden; and the “smears” it leveled at John Kerry, regarding both his war record and his stance on the war. Led by Karl Rove, the chickenhawks of course prevailed, turning a decorated war hero into a flip-flopper who didn’t support our troops.

John Kerry’s own weak campaign contributed to the Republicans’ success, but Franken, ever the party man, is reluctant to criticize him. Rightly angry at the Republicans’ blatant lies about Kerry’s war record, Franken nonetheless never questions the wisdom of running a campaign entirely on one’s bio, as Kerry initially tried to do, thus opening his past to attack. Franken does suggest that Kerry’s October 2002 vote to authorize the use of force in Iraq was “In retrospect, a bad position,” but he then goes on to defend that position as “absolutely consistent” with Kerry’s previous calls for Iraq to disarm. That may be true, but the vote to authorize force was quickly interpreted as vote for the war. And Kerry’s attempts to explain why his vote was “not really for the war” made him seem like he was talking out of both sides of his mouth. While the lesson of the 2002 and 2004 elections should be that the Democrats need a clear and consistent position on the war, Franken offers little more than righteous anger about it. At the end of the book, he suggests that a “politically motivated premature withdrawal” would be “a disaster.”

In the last section of Truth, Franken—in a mock letter written in 2015 to his grandchildren, two of whom are named “Barack” and “Hillary”—outlines how the Democrats’ “sweeping vision” propelled them back into power in 2008. Domestically, Franken’s agenda is quite progressive: universal health care, massive investment in schools, a repeal of Bush’s tax cuts for the rich, and a full-fledged effort to make “America’s corporate citizens accept the responsibilities of citizenship.” Franken’s foreign policy blueprint is much less detailed, however, and deals mainly with “energy independence.” “The day is coming soon,” he says in “2015,” when “we won’t have to organize our foreign policy around protecting our access to oil in the Persian Gulf. Maybe then we’ll be able to withdraw once and for all from Iraq.” Incredibly, Franken’s timetable for withdrawal may even be longer than the Republicans’, which depends on who wins in 2008—if the Democrats prevail, the Republicans likely will instantly renew their “isolationism.”


This past month, in the week leading up to the most recent vote in Iraq on a new constitution, Franken devoted significant time on his show to the war—and unintentionally, perhaps, revealed that not everyone in Washington is committed to staying in Baghdad. That Monday, he spoke to Iraqi feminist Zainab Salabi about her book Between Two Worlds: Escape from Tyranny: Growing Up in the Shadow of Saddam, which among other things reminded audiences about the horrors of the Hussein regime. But also coming on the show that day was Coleen Rowley, the courageous ex-FBI agent and 9/11 whistleblower, who discussed her upcoming run for Congress in Minnesota. When Franken asked what her main issue would be, Rowley readily replied, “The war in Iraq, and how spending on it is taking away funding from education, and causing the Bush administration to spend down the Social Security surplus.” An uncomfortable Franken then said that the “million-dollar question” was “What can we do about it?” Rowley cited the argument made by former Reagan NSA director Lt. General William Odom for withdrawal, as well as various legislation—proposed by Senator Russ Feingold and others—calling for the same. Franken didn’t express for support for such a position, and it was the last time that the idea of a U.S. pullout was mentioned that week.

Instead, Franken emphasized the Bush administration’s disastrous handling of the occupation. That Tuesday, he spoke to Noah Feldman, an NYU law professor and adviser to the occupation government, about the mismanagement of the occupation—“We’re all looking towards Saturday and the results of the election,” Franken assured him. The next day he led off the show with a discussion of how the Bush gang willfully ignored several official, detailed, and ultimately accurate warnings about what would happen after the regime fell. That Thursday, the New Yorker’s George Packer came on to discuss his book, Assassin’s Gate, in which he expresses his dismay over the bungled occupation. Manifestly shaken, Franken at one point told Packer that the Bush team was not made up of “adults,” and that the administration’s antics in Iraq “make me so angry I want to cry.” Packer for his part wondered whether Americans possessed “the will, the patience and the stamina” to continue the occupation until it “succeeds.” Neither even raised the idea of an American withdrawal.

Both in Iraq and here at home, many questions remain. Why is anyone “surprised” at the chaos created by an administration openly disdainful of “nation-building”? Why isn’t the escalating cost of the war and occupation—over $200 billion and counting—not a pressing issue for both Democratic deficit hawks and Republican fiscal conservatives? When will the calls for withdrawal proposed by Odom, Feingold, and others on both sides of the aisle get serious consideration? I’m not sure who has the answers, but my raising such questions here does at least say one thing about Al Franken: the guy who Bill O’Reilly likes to deride as Stuart Smalley (Franken’s character on Saturday Night Live) has managed to become a real serious player in our national political debate.

Living only one street apart in a London suburb, two 7-year-olds strike up a friendship that lasts until they are 11 and one of them moves away. In the years that follow, their school careers diverge (one begins attending university, the other enrolls in a local art school) but their musical tastes are oddly similar, as they discover when their paths finally cross again on a train platform in their hometown.

There are no biomorphic figures, no screaming popes—only explorations of figures within the confines of pictorial space. But that self-imposed limitation is a tremendous opportunity to look closely at superb examples of Bacon’s work.

The book brings together photographic portraits of people protesting in Zuccotti Park during the Occupy Wall Street movement in Lower Manhattan in 2011 and the racial justice protests across New York City throughout the summer of 2020, filling critical gaps in the narrative around the haves and have-nots.