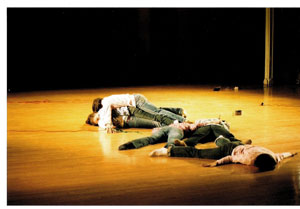 Photo from Dance and the Urban Experience

Surface differences aside, Brooklyn-based Beth Gill’s “wounded giant” and Tokyo-based Kakuya Ohashi’s “Wish You Were Here,” presented together recently at the Kitchen, have more in common than a spare aesthetic and a detached air. Even though, as curator Yasuko Yokoshi remarked, “Kakuya’s approach is more psychological and Beth’s is more about physical space,” both dances respond to the perils and nature of urban existence.

Gill is a recent New York University graduate who works in a site-responsive way and, by her own admission, “could easily geek out on the Judson movement.” For the uninitiated, the Judson Dance Project, based in the Village and operating from 1962-1976, is considered the first “postmodern” dance group. They used a vocabulary of everyday movement, as well as trained and untrained dancers, and were dedicated to stripping modern dance of its by-then-established habits.

True to Judson’s emphasis on collaboration, Gill says “wounded giant” began when she brought her seven dancers into the theater. “The Kitchen struck me as big and empty, hollow, with a tremendous amount of texture. As I was imagining the bodies in the space I was struck by a sense of scale, which seemed to have an emotional value for me.” She worked on the piece by giving her dancers instructions like “carry that fan across the stage, wind up the cord, etc.,” seeing how they responded, and taking it from there. Chris Peck, a sound artist who’s worked with Gill on other projects, including one staged on a Brooklyn rooftop at sunset, collected noise from inside the space to compose the score. He performs live from offstage.

The modest but thorough accomplishment of “wounded giant” is the creation of a sense-sharpening environment in which small differences between individual bodies, gestures, and natural and unnatural movement become evident. “Even ambient street sounds cooperate,” Peck noted. In a sense, the dance is an antidote to the hyper-stimulation of urban life, which allows one so little space and time around any observation.

In a memorable moment, one male dancer is held horizontally against the back wall. The length of time he stays there, with little sense of effort, suggests freedom and weightlessness. Often several dancers assume sitting positions in various parts of the stage; they are so delicate and deliberate, so perfectly aligned, one feels one is looking at a painting. Movement has been slowed down, and framed.

“The two dances use such dramatically different frames,” Gill remarked after watching them both together. “They had such a different relationship to the space. I found it really beautiful as a viewer to be able to watch the space transform like that in one evening.”


Though “Wish You Were Here” is also a minimalist dance dealing with, as Ohashi says “the alienation of urban life,” it looks quite different from “wounded giant,” which uses the entire space and even has dancers pressed up against the back wall. Excepting entrances and exits, “Wish You Were Here” is restricted to a small rectangle in the center of the space. Skank, a Tokyo-based DJ, directs the sound from a corner with the help of a lot of equipment and an electric guitar.

Relentlessly, intentionally unpleasant, “Wish You Were Here” is a dark, dramatic dance in which two people operate independently but within close range. As Ohashi explained of his own performance and that of Miu Miu, the female dancer in the piece, “He experiences things from the outside in. His face reacts to external happenings. She experiences things from the inside out, expressing her feeling through her body.”

City life involves rapid alternation between viewing and an awareness of being viewed. Sometimes a single moment can be ambiguous. All the writhing and individual struggle in “Wish You Were Here” also suggests the discomfort of living in close proximity to people involved in very different narratives.

The dance is ripe with implied violence. The range of expressions on Ohashi’s face, his position seated and facing us, his suit and the grinding sound design imply a subway setting. Ohashi may intend to reference the 1995 sarin gas attack in the Tokyo subway system; regardless, there is an impression of something very bad happening beneath the work’s surface of recognizable activity. When Ohashi drops onto the floor and crawls under his seat as if hiding from something, then runs in place with the chair stuck around his torso (first fearfully and then triumphantly), one wonders what he is escaping from. Miu Miu is left bent over and sobbing at the end. “I am not interested in abuse specifically,” Ohashi remarked, “but in violence generally.”

For Yokoshi, “Wish You Were Here” captures the “essence of Tokyo.”

“Both dances are minimal, dramatic and sensitive,” the curator remarked. “Though I don’t think they consciously try to be urban, for me there is an intense presence of isolation and communication, which I somehow associate with the urban.”

Continuation and the Break: Notes on Black Lives and Tap Dance

In a layered essay, Orlando Hernández weaves together the history and practice of tap dance with insights into pandemic, US anti-blackness, native theology, and Western time. An intimate look at the syncopated art form offers countering modes of arranging our experience.