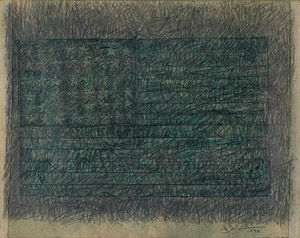 A fortunate exhibition of Jasper Johns flag drawings at Craig F. Starr Gallery presents mostly early drawings, from 1955 and 1956, in a variety of mediums—graphite wash, pencil, ink, collage, watercolor, and some re-worked lithographs—reflecting the artist’s versatility in creating variations on a theme. This exhibition follows the exhibition of the latest work, Catenary, at Matthew Marks Gallery last spring, and gives us an opportunity to see both old and new works in terms of distance and proximity.

The American flag was Johns’s breakthrough image in 1954, first in the usual sense of an artist arriving at a personal vocabulary, but also in the literal sense of a breaking through consciousness, for the artist has said that the idea of painting the flag came to him in a dream the same year in which he had destroyed all his previous work.

Looking at a Johns flag drawing differs from looking at one of his flag paintings in that the viewer does not have the sensation of looking at an object. The object quality he achieves in his paintings is a result of his using colored paint to create a cohesive surface rather than a painting unified by light. His flatness reminds me of a solid seen in a mirror, slightly surreal and disconcerting. Johns’ drawings, on the other hand, have the density of certain musical scores by progressive composers of the fifties and sixties, but unlike the paintings, they breathe. Until Johns chose the flag as his subject matter it was mainly a staple of folk art. For 175 years, myths and lore grew up around the flag and the symbolism of its colors. Most of us probably learned in school that the color symbolism is: valor, purity, and justice, or some slight variation of these qualities. Johns realized that, by definition, a flag is a “standard,” a “device,” and that by painting it he would create a “standard standard,” a blueprint within which he would be free to create seductive variations in much the same way the categories “landscape” and “woman” functioned for de Kooning.

Johns was not the first to create a “standard standard.” While assembling ideas for his “Large Glass,” Duchamp made what he would come to call his favorite work: “Three Standard Stoppages,” “stoppage” being another word for standard. I had been thinking recently about this aspect of Johns’ work, and string in general, ever since the Catenary exhibition. The word “catenary” refers to the curve a string, cord, or chain makes when it is allowed to hang by its own weight from two equal points. Johns’ show appeared to consist mainly of this device, accompanied by adjacent fragments of past imagery. Though the works seemed deceptively empty, they reminded me of an equally deceptive image I could not quite place. This exhibition of flag drawings finally jogged my memory: as soon as I saw “Green Flag” (1956) I was able to locate “catenary” in Charles Sheeler’s
1923 “Self Portrait.”

Sheeler was interviewed by Maurice Friedman in 1959, the year of Johns’ first one-person exhibition at the Leo Castelli Gallery, and in response to a question about whether he thought there could be a recognizably American art, he mentioned a Stuart Davis painting called “Standard Still Life.” “All things should have that similar title appropriate with the variations to the subject. ‘Standard Still Life,’ well, that exists now…then you have an anchor post from which to deviate…that is certainly part of it, that is, that word does give you a clue.” Later in the interview he mentioned a visit from Duchamp to his apartment: “One night he was up at my apartment and there was a drawing that I had just completed, called ‘Self Portrait’...and he sat down, pulled a chair up and sat down before it for a few minutes and when he got up, he said in that mild voice of his, ‘I like it.’ Period. That was all there was to it, but that was the only comment I ever heard him make.”

The “Self Portrait” may have been a response to Duchamp’s “Large Glass,” as Susan Fillin-Yeh suggests in her 1978 essay on the drawing. Johns, I believe, shares with Sheeler a critical hesitation about absolute abstraction, although in both artists abstraction is the foundation of their work. Duchamp, in the early days of abstraction, cautioned American artists of the Arensberg and Steiglitz circles to avoid the influence of Europe. Sheeler’s straightforward style of drawing would have a strong appeal for Johns. “Green Flag” struck my eye because it has the appearance of the reflection of a flag seen in darkened glass, and Johns’s mark making is similar to Sheeler’s. A flag, like many of Johns’s favorite subjects, the sea horse or the double profile illusion, is identical on both sides and looks the same in reflection as it does head-on.

Johns may know Sheeler’s 1959 statement, “When we look at any object around us we have to bring it up into a conscious plane because when we look at the next thing in sequence to the first object we have gazed at, there’s still an overtone carried over of what the retina has just previously recorded.” Sheeler describes his use of a “catena,” a closely connected series with reference to succession in time. In the Sheeler drawing, though, we find the catenary of Johns’ title: the curve formed by the cord of the window shade
is a classic catenary.

George Washington, on the subject of the American flag, simply stated that the red was from the flag of England, and the white to show that we had separated from her. In 1945 Duchamp made a portrait of Washington for an American magazine’s July 4th issue. A collage of white gauze bandage, stained with red and dotted with stars, it was rejected. When viewed upright one sees the unmistakable profile of Washington, when viewed sideways one sees the unmistakable map of the United States. The title is “Allegorie de Genre.” Nine years later Johns would present the commonplace as the place of painting in response to the prevailing climate of abstraction, much as Sheeler himself, with the work of both artists connected through that of Duchamp.

Christopher Wilmarth: Sculpture and Drawings from the 1970s

A new exhibition at Craig F. Starr Gallery presents a rare opportunity to revisit Christopher Wilmarth's serene glass and steel sculptures of the 1970s. No drama, no mess, no rough edges, nothing but the Apollonian perfection of flawless, hydrofluoric acid-etched translucent glass surfaces that attract and hold the light, reflecting in their layered depths tonal ranges from frosty white to pure aqua.

Craig Starr Gallery’s Myron Stout and Cycladic Art confronts the artist and the ancients, for the first time, face to face. The exhibition is quite literally museum-quality, including four of the iconic black-and-white paintings (that’s a lot—there are only 21 in total), three charcoal drawings in similar format, and a number of the later less-celebrated graphite drawings, startlingly small, in tones ranging from near-fleshy paper to smoky and smokier grays: no black, no white.