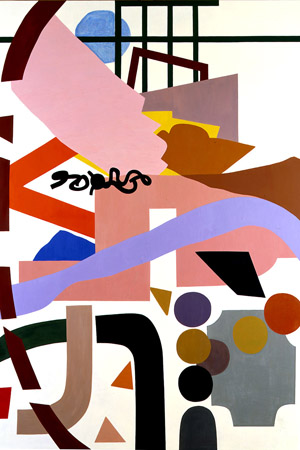 When you think of the French tradition in painting, you think of Poussin, Delacroix, and Ingres. Monet comes to mind. Braque, Matisse, and Léger follow along with all the foreigners who flocked to Paris at the turn of the 20th century to help make it the center of the international art world. After that, trying to define a French tradition gets a bit tricky. There are the Nouveaux Realistes, but they seem less homegrown, as much a product of English and American influence as of French savoir-faire. This is also true of the French action painters. We’re prone to thinking of art in an evolutionary sense. Art historians’ emphasis on qualities common to disparate movements can obscure the fact that national traditions can be lost. The attention to touch, subtle awareness of color, and attachment to tradition that characterized French painting from the eighteenth century through the mid twentieth century might have been submerged completely in the waves of foreign aesthetics that swept into the country after 1950.

Shirley Jaffe participated in the end of this invasion and miraculously kept her head above water. With an American painter of her generation, you might expect either a gestural style inherited from de Kooning or something more reductive like the post-Greenberg painters. With Jaffe you get neither. She went to Paris as a young American over fifty years ago, imbibed the French tradition and proceeded to rejuvenate it. Her current exhibition at Tibor de Nagy reveals the influence of Matisse, Gris and, most prominently, Léger, who painted big form neatly with a small brush. Jaffe’s even impasto surfaces resemble his, as does her sense of floating form abstracted from observation.

Jaffe is not a latter-day modernist. Her paintings are unmarked by nostalgia: [insisting on a new sythesis between European modernist style and the “American Scene” subject matter like that of Stuart Davis]. But instead of beginning with the blank slate minimalism gave most contemporary American painters, she begins with tradition. Staring at her paintings leaves me wondering in which direction the Atlantic really carries its currents of painterly influence. “Champ de Mars,” a big painting with the dual light of an interior-with-window, reminds me of a Tom Wesselman. Jaffe has taken the high key palette of pop and carried it into an abstraction from a classic French motif. Strange bed fellows perhaps, but Wesselman has painted his fair share of windows.

The process of abstracting from reality is a process of making things one’s own, of acknowledging that to paint anything at all is to represent it in one’s own terms. Jaffe’s painting grows from one of the early tributaries of this relatively new trend in western painting. It illustrates the way the hand and mind transform what the eye sees. Her sensibilities are contemporary while the esteem in which she holds her forbearers strengthens her painting and her tradition.

Posing Modernity: The Black Model from Manet and Matisse to Today

There was a time, not so long ago, when the study of Realism, Impressionism, and the roots of French Modernism was the edgiest of fields. Advanced scholarship and concomitant museum exhibitions teased out aspects of such Paris-based art that kept it dynamic: the quality of intellectual discernment was high; smart graduate dissertations flowed; the works connected with a popular audience; and picture prices went through the roof. But then complacency set in.

By Eugène Sue, translated from the French by Robert Bononno

At that moment Rodolphe instructed the driver, who had passed the village of Sarcelles, to take the first road on the right, cross Villiers-le-Bel, and then turn left, heading straight. Turning to La Goualeuse, he said “Now that you’re satisfied with me, we can amuse ourselves with building castles in Spain. It doesn’t cost much, so you can’t reproach me for the expense.”