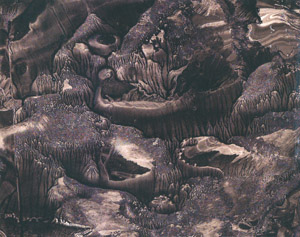 If you ask Roland Flexner, he will adamantly deny being anything so categorically limiting as a “process artist,” despite the ingenious mark making events using blown bubbles of soap, ink, and water he has come to be known for. He’s not playing coy about the sexy forms that emerge in his art—these methods are the journey for him, not the destination.

It is misleading to suggest that the work in the current show is something other than sexy, because it is. But it has subtlety and depth, too. Flexner may be an old pro at delivering the visual climax of a singular event, however the current work is less orgiastically preoccupied. Flexner has taken to foreplay, here, recounting the traces of considered and prolonged interaction with each piece.

Flexner’s affinity for the finer qualities of sumi ink took him to Kyoto, Japan last year to study traditional methods of transferring ink from the surface of water onto paper. “Prolonged interaction” here is relative, and “afterplay” is more precise than foreplay. While still wet on the surface of the paper, Flexner reworks each piece. The window of opportunity is narrow as the ink dries in minutes. It’s not a Fra Angelico, but it’s not the momentary triumph of a burst bubble, either.

The twenty-two individual pieces work well as a related group. This has a lot to do with uniformity of size as well as the unavoidable inference that Flexner is investigating materials and applications as much as he is composing forms. Despite this undeniable filiation, the composition range in “Nocturne” is considerable.

“Untitled (RFO5-12)”as an individual piece verges on illusion in its relationship to landscape. Patchy areas of daubed ink appear as plateaus rising above darker canyons of ink that bare tiny branching patterns indicating that something was adhered and pulled from the surface. The piece is diaphanous and multilayered and the chronology of the interactions is ambiguous. The result is a complex and confounding composition that is almost, but not quite, accidental. Close by, “Untitled (SN9)” is framed from within by thick rivulets of ink that draws focus toward a luminous, airy center. The space, here, is deep, luminous, and abstract, while the space in “(RFO5-12)” is more shallow and pictorial (as the space in a traditional Chinese landscape appears more shallow than that in a Thomas Moran).

Flexner’s reduced palette makes for several interesting figure/ground events in the show, the most interesting happens on the surface of “Untitled (RF05-13).”The piece strikes first as an abstracted nocturnal landscape whose representational structure soon begins to degenerate. The dark to light gradient that runs from upper left soon jumps in front of the slab of black ink that was initially in the background when it was the moonlit sky of a landscape. The foreground is subsumed by the background. The tree branches on the right revert to abstract shapes and continue to obscure
the visual hierarchy.

The best moments in the show are those when the rational mind can’t quite parse the formal elements into a digestible, logical form. These periods of mental uneasiness between the actual and the accidental guide the show. The tension in these pieces function like Rorschachs that change identity—from event, to abstraction, to illusion, never settling anywhere, but remaining perpetually active.

To punctuate a show that demonstrates his increased willingness for embellishment, Flexner ends on a joke. “Untitled,”on the back wall of the gallery completes an accidental inkblot resembling the top of a skull by drawing in the lower jaw portion. Amidst the swirls and drips that signify Flexner’s material experimentations, the cartoonish skull jumps conspicuously to the surface. Most artists couldn’t get away with such a slack-handed move, but Roland Flexner pulls it off with style. In an art world where hyper control and strategic thinking determines so much of what we see, it’s a relief to have an artist like Roland Flexner that has enough pure and curious experimental equity in the bank that such controlled and premeditated impudence is charming and easy for him to afford.

Toronto-born and South Bronx-based Mike Childs has been working in New York since 1995. In this exhibition, 28 paintings from the last 16 years are presented, revealing a constant and evolving exploration of how humans negotiate their surrounding modularly built, urban environment. Patterns and contiguous space interface, interlace, and proliferate like so many passing surfaces and colors, changing with the passage of time or the panorama of a gaze. Walls, graffiti, signage, and bridges of the Bronx all began to fold into the flux of Childs’s images during his time living in the neighborhood.

For over four decades, artist and writer Mark Bloch has been fastidiously building his archive of mail art, a practice he began in the late ’70s under the banner of the Postal Art Network—giving him his artistic pseudonym PAN.

In his engulfing, otherworldly video installation at Tate Britain, O’ Magic Power of Bleakness, Mark Leckey has transformed a cavernous gallery into a freeway underpass—specifically his childhood hangout under the M53 Motorway, which runs through his deindustrialized hometown on the Wirral Peninsula across the River Mersey from Liverpool.