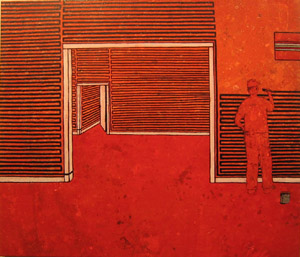 A little “painter man,” brush in hand, strokes away at a broad black line. Following the trail of this line, it doubles back on itself again and again, passing through the doorway at the center of the picture, filling the room behind, then streaks on to fill another, on an endless continuum. This stripe fills not just the walls in the painting but is symbolic of the tedious nature of the house painter’s dilemma, spending their days expertly covering the walls of clients’ homes to finance the personal pursuit of fulfilling their private painterly practice. The above painting, “One Liner,” could be a metaphor for any artist trying to make it in the work-a-day world, but is for Briggs emblematic of a crisis that threw his artistic aspirations into doubt and caused him to question his commitment to art.

As an abstractionist, Briggs spent twenty years earning advanced degrees, working in New York, and showing occasionally in group exhibitions. In the late nineties, he scheduled a debut one-man show with a gallery in Soho. When the gallery folded just a month before his opening, Briggs predictably suffered a debilitating artistic collapse. Over the next three years his house painting business was booming but the studio work languished. Later, during a studio visit to Kathy Bradford, she inadvertently showed Briggs an illustrated manual on “home improvements.” A drawing of a hapless “painter man” stroking a wall with a paint roller, and captioned “This is fun” deeply resonated with Briggs. He appropriated the image, using it as a surrogate self-portrait. This was the nudge he needed to begin another chapter in his artistic career, this time as a figurative painter. This turn to figuration was in a sense an act of self-preservation, allowing him to exercise his anxieties and poke fun at himself at the same time. “I wanted somehow to remove the distance between the art I was making and my life, to bring them together,” said the artist. With this in mind Briggs not only began developing narratives that cast “painter man” as the hard-luck day laborer with a dream, but to bring the tools and materials of his trade into the works. He employs his used drop clothes, with their paint splatters and plaster build up, as grounds. An odd and gelatinousness substance called “Plaster Weld” is used because of its unique transparent body and the reddish orange tint. It became the foundation color theme for this body of work.

Briggs’ use of black outline recalls the works of a prominent group of Pop artists, and the borrowed media image gives a cool distance to some of the pictures, though the rugged facture and dramatic content places it at odds with Pop’s slickness. “Red Studio,” an industrial version of the Matisse masterpiece, is in Briggs’ hands a “Steven King shops at Home Depot” kind of nightmare. Briggs’ studio is pictured in shades of red and orange. On the wall hangs a large painting of a mountain of empty paint-dripping buckets. The foreground is a virtual flood of red paint within which paintings, kegs of spackle and yet more cans of paint float. This might induce fear in the non-painter, but probably represents just a small amount of the paint gone through in a year’s time by “painter man.”

In “Through the Cracks,” (2005), the dichotomy of representation is given a witty and satirical twist. A cracked and crumbling wall is depicted in stark black lines. The red lath is exposed through cavities in the plaster, in contrast to the white wall. The “holes” and “cracks” are irregular and striped, and without reference to reality, would look every bit as abstract as Briggs’ paintings from the 90s. Is this a straight rendering of a wall in need of repair, or a picture of a mural of a “crumbling wall?” By conjoining the visual quandaries of representation with a narrative scenario, Briggs extends a tradition going back to “A Rake’s Progress.” He’s crafted a morality play of an individual’s struggle against a word of indifference and philistinism. If these works were a country-western song, Waylon Jennings would be singing, “Mamas don’t let your babies grow up to be artists.” Rick Briggs, and a host of other hard working artists thankfully won’t be listening.

Susan Rothenberg: On Both Sides of My Line

Gray New York has rounded up 10 of Susan Rothenberg’s horses, all produced between 1974 and 1979. This is a rodeo of a very special kind: there are no riders as in a Marino Marini sculpture, no bronco busters, no human figures at all to distract us from the presence of the horses.

Kelly Grovier’s On the Line: Conversations with Sean Scully

An Irish painter and an American art critic form a bond that generates more than 10 years of engagement, culminating in a handsome book of tightly edited conversation. The book moves in places you expect it to, but there are narrative surprises and plays of cleverness built into the design that keep your attention. There is also great humor and the witty intelligence of two canny observers.