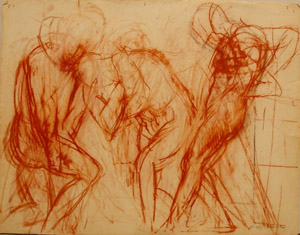 Nicolas Carone, who turned 88 this year, is a painter who has been reluctant to be categorized as a second generation Abstract Expressionist. His work—while leaning towards the same argument for and against de Kooning’s expressiveness of the then controversial synthesis of the figure and abstraction at the first glance—has in fact far greater affinities to wider sources in art history: Greek, Etruscan, Roman, Byzantine, Gothic, Renaissance, cubist, surrealist, as well as Pollock.

De Kooning’s early career can be divided into three phases: the independent practice of both abstract and figure painting from the 1930s to the mid-1940s, the compressed interplay of the two tendencies of the late 1940s, and the landmark Woman series of the early 1950s in which the figure got buried and paved the way for the urban abstraction paintings. And it was this third phase that propelled painters such as Milton Resnick, Grace Hartigan, Joan Mitchell, and Michael Goldberg on the one hand, and Larry Rivers, Fairfield Porter, Alex Katz, or the so-called gestural realist painters on the other, to make works that were regarded as second generation. Though Carone, whose training is similar to that of de Kooning’s, painted pictures in the mid-to late-1950s that express the prevailing mood of the time, his work cannot be reduced to either of the directions taken by his contemporaries. It is due to his natural gift as a draftsman, a great feeling for plastic form from the classical to the abstract, that in his process nothing is taken for granted—and rightly so.

This long-awaited mini-retrospective of Carone’s work on paper is an opportunity to survey the history of his career from 1950 to the present. In two rare abstractions (both untitled, ca. 1950), the elegiac and lyrical mastery of line is evident. Another group of work from the 1960s to the 1990s (all untitled and executed in red chalk) reveals Carone’s deep admiration for Renaissance masters, in particular Michelangelo and Caravaggio. Pencil drawings of three single nudes drawn from observation in the early to mid-seventies demonstrate his sure hand in controlling pure line as delicate as in Raphael and Ingres. And with one exception, “Signals for the Blind #1” (2000), which is akin to the surrealist’s blotting technique and use of chance operations, the speed and urgency to bring forth the figure to co-exist with abstraction seems to be the central preoccupation of Carone’s art. It is true that one can detect the presence of both de Kooning and Pollock throughout his development, but the same case can be argued for all the old and modern masters. The truth is, neither Pollock nor de Kooning ever treated the figure in this unique fashion.

Pollock’s implicit depiction of the figure has always been linked to Jungian symbolism, perhaps more pronounced during this period than the black and white paintings from 1951 to 1953 (except for “Portrait and a Dream,” in which the right half is painted with a few colors). One can certainly point out Pollock’s interest in Picasso’s surrealist pictures leading to and after the Spanish Civil War, which actually is more expressively revealed in his psychoanalytic drawings than in his paintings. De Kooning’s attraction to the figure has had a more complicated relationship with Picasso’s neo-classical as well as his surrealist period. It is in the latter that de Kooning shares affinities with Pollock, although in de Kooning’s work one feels the constant awareness of cubism more than with Pollock. As for Carone’s long invested interest in the figure, it is informed by his belief that the history of art is a continuous whole: abstract art with earlier art as one is the true calling of his art. What Carone has to offer in his work is the testament of the historical documentation that upholds his philosophy: true works of art ultimately are attained only through a personal and lived experience.

Carone trained at a very young age at Leonardo da Vinci School of Art, St. Mark’s Church (alumni include Isamu Noguchi, Peter Agostini, and Conrad Marca- Relli). The director was sculptor Attillo Picarelli (known for his Maine Monument in Columbus Circle). Later he studied at the National Academy of Design, where he assisted Leon Knoll with many of his mural projects. Finally it was in Hans Hoffman’s class that Carone became a part of the New York School’s art community. In 1941 and 1949, he won the Prix de Rome and the Fulbright Fellowship which introduced him to many Italian artists: Fazzini, Buri, Dorazio, and later Matta, who migrated to Rome after Gorky’s suicide in the summer of 1948—they remained close friends until Matta’s death three years ago.

Carone’s lack of irony and his indifference towards pop culture’s iconography is clearly reflected in his analogous view of art: a romantic who wants to be free from conventional tides; a revisionist who desires the history of art be seen as one coherent and continuous process without the fear of delivering any kind of dogma. Not unlike John Graham and his system of dialectic art, Nicolas Carone, who is also known as a brilliant teacher, is a painter of independent spirit.

While Sophie Taeuber-Arp is perhaps best known in Europe—given the majority of readings on her work stem from translations in German, French, and Italian—her relatively brief career was a formidable one, to say the least. Sophie Taeuber-Arp: Living Abstraction at the Museum of Modern Art is a magnificent, if not exemplary, exhibition that includes some 400 works intuitively conceived and produced in diverse media by a remarkable avant-garde practitioner.