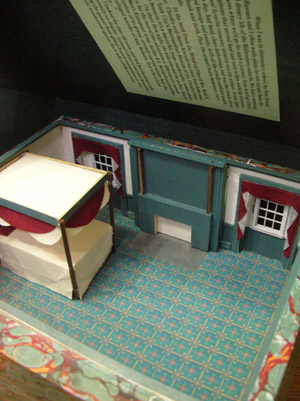 Micki Watanabe, from Lost and Found in the Stacks, “In the Mixed-Up Files (Volume Two: Haverhill Room),”
(Edition of 3), 2005, wood, plastic, cloth, paper.

Above the din of chatter and clinking espresso spoons from the coffee shop in the Brooklyn Public Library’s atrium, several constructions by Micki Watanabe sit quietly and inconspicuously behind glass on the second floor. Most visitors scurry by her understated and thoughtful project, Lost and Found in the Stacks, without a notice on their way to multi-media labs, guest speakers, and other features of the modern library. It seems that the library, that seeming lo-fi stalwart and tranquil sanctuary of analog learning, has itself had to turn the pleasure dial up to meet the rising sensory expectations of the desensitized public.

But even as the library feels more like a shopping mall than ever before, its spirit has carried on. If most of the people in the library are there to check out movies on DVD or to drink lattes, the feel of the library is inviting, communal, and grandmotherly.

“Lost and Found in the Stacks” is both material and concept. The display on the second floor demonstrates its material presentation in a somewhat dislocated fashion. It consists of four sets of art boxes that the artist has created to function like books. Each box or set of boxes opens to reveal a world that conflates personal memory, fantasy, and the narrative of the actual book to which each box corresponds. There are four: Rapunzel, Paddington Station, and In the Mixed up Files I and II. Each has been placed in the stacks alongside the corresponding text volumes and is catalogued in the computer index as an “Art Object.” The piece is not really meant to be held captive in a vitrine. Each book is designed to be serendipitously unearthed in the stacks while looking for the actual book.

Watanabe’s project poses the question, ‘why are libraries and public museums, both public trusts, so different?’ While the library is warm and accessible, the art museum has (arguably) become stark, authoritative, and forbidding, acting as a reliquary where its artifacts sometimes seem so precious and unapproachable that it is difficult to remember that they are public property (although more and more are private).

If this seems overstated, consider the mindset you have when you are deep inside the stacks of your library versus that of your first experience in a museum. Think about the feeling you had when you got too close to an art object, or snatched a Felix Gonzales Torres lithograph or piece of hard candy from one of his participatory art pieces—you knew you could take them, and you did, but there was still a hush in the room and a flutter in your chest. Why did this occur? This kind of trepidation is noticeably absent in the stacks of any library. So, why, then, is the museum so clinical, so repressive, and so ungiving to visitors?

Watanabe suggests an answer to this question with a question of her own: “What if the public could check out artifacts?” In answering this question, or least putting it to the test, she has avoided adopting the strategy of other institutional gadflies such as Fred Wilson who have chosen to take their critique directly to the organization in question. Watanabe has simply found an alternative institutional model and taken her proposal there to test it.

Watanabe’s thinking proves to be sound and admirable. And the whimsical fantasy invested in these boxes is enjoyable and refreshing. A slight problem arises, however. At the time of my visit, each of the art objects in the stacks had been checked out, making them unavailable for viewing for the duration of her show. This might be an obvious conundrum in proposing that the public be able to borrow art. There are other problems too, such as what happens when unique pieces are damaged, destroyed, lost, or, worse, conceptual?

To be sure, checking out art is not really a feasible solution. But Watanabe is not really proposing that we turn museums into libraries. She merely considers why museums don’t try to feel like libraries and proposes a playful solution to try to stimulate thought on the subject. Watanabe, through this project, hopes to connect with the art-going public through what she believes is a generally accepted notion that, while most of us might feel some degree of cognitive fulfillment when we experience art in museums, we still feel more comfortable and better served in a library.