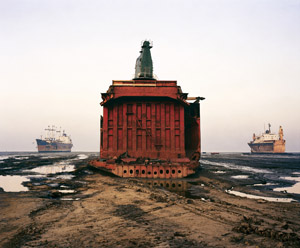 Edward Burtynsky’s show of large scale photographs of the industrial landscape owes more to the photography of Ansel Adams or the paintings of Charles Scheeler than to contemporaries like Andreas Gursky or Gregory Crewdson. Where Gursky explores the visible consumer landscape wrought by modernity, Burtynsky trains his camera with a painter’s eye on the seldom seen industrial landscape of North America, Bangladesh, India, and China. Unlike his contemporaries who explore narrative and illusion, Burtynsky works with a journalistic objectivity and reveals the effects of modernity to inspire awe, dread, and guilt in his viewers.

There is no shortage of sublime landscapes in Burtynsky’s subjects; nickel tailings, post-consumer waste, marble quarries, oil fields, Chinese factories, and the Three Gorges Dam all reveal human activity on a staggering scale. While feminist critiques of aesthetics have revealed the gender-based dialectic of beauty and the sublime as a feminine/masculine binary, the term remain relevant for Burtynsky’s critique. There is great beauty in the sulfurous, lava-like flows of “Nickel Tailings #34 (and #35) Sudbury, Ontario” (1996) or the gorgeous abstraction of cut granite in “Rock of Ages # 17 E.L Smith Quarry, Barre VT” (1991). Burtynsky’s camera lovingly and gracefully captures environmental and social ravages by quoting art history. He edges into abstract expressionism, minimalism, romanticism, and, of course, realism with remarkable stylistic control. The art historical references allow Burtynsky to frame the terrible effects of modernity within received notions of beauty. It’s a poetic, constructive irony that gives the show a necessary self-reflexivity about modernity’s positivist myth of progress.

The photographs aspire to the sublime by invoking consumer awe and guilt about the less visible effects of modern industrialization both in North America and abroad. Burtynsky doesn’t proselytize with his art. He doesn’t intervene in the process allowing the massive environmental changes and social iniquities to assert themselves. His series of “densified” consumer and industrial waste and tire fields invoke both modernist abstraction and minimalism. “Ferrous Bushling # 7 Hamilton, Ontario” (1997) suggests the allover abstraction of Jackson Pollock or Cy Twombly, while the monumental tire piles in “Oxford Tire Pile #8 Westley, California” create vertigo inducing walls that rival Richard Serra’s torqued ellipses. Further, the massive rusting curves of iron and steel in the ship breaking series serve as a rueful counterpoint to minimalism’s heroic use of industrial materials. In one compelling quotation, Burtynsky shows an industrial inversion of Robert Smithson’s “Spiral Jetty” as massive quarry spirals into the earth towards a pool of toxic water. It’s a rueful compliment to Smithson’s “earth art.”

Burtynsky is obviously aware of the notions of “progress” shared by modernity and modernism, which have given way to wary recognition that change does not always imply a forward trajectory toward a Utopian state. His lush photographs focus on the aftermath of modernity. In an unflinching documentation of China’s rapid embrace of modernity, Burtynsky articulates his criticism of these ideals. “Dam #9 The Three Gorges Dam Project Yangtze River, China” (2002) is framed in the nostalgic style of Charles Sheeler, whose precisionist paintings celebrated American progress. Yet the rest of the photographs systematically reveal the harsh realities of China’s rapid change. In his dark series of steel plants, the vast resources used to fuel China’s modernization are presented in dark, black-and-white photographs that resemble nothing so much as Anselm Kiefer’s pyramid paintings. The black mountain of “Boa Steel #8 Shanghai, China” (2005) is a darkly expressionistic vision of the environmental cost of such a massive undertaking. The series also spreads to the most overtly social critique in the show. In the diptych “Feng Jie #3 (and #4), Three Gorges Dam Project Yangtze River China” (2002), an entire village is seen being dissembled by Chinese rendered homeless in the face of the impending flooding by Yangtze.


Burtynsky explores the social ramifications in his urban renewal series where modernity visibly collides with tradition. “Urban Renewal #1 Factory Construction, Outside Shenzhen, Guandong Provinence, China” (2004) is a stunning visual metaphor as a modern factory is covered entirely in traditional bamboo scaffolding. Burtynsky’s almost intimate, ground level photograph is dwarfed by the aerial views of Shanghai’s Old City being overrun with massively multiplying modernist towers. The endless skyline of Shanghai resembles a grotesque caricature of New York City that is both comic and appalling.

From beneath the bamboo facade, Burtynsky reveals the brightly colored factory cities that have emerged in China with their armies of color-coded workers. The dehumanizing images of endless rows of factory workers in the manufacturing series are terrifying by Western standards. The diptych “#10b, Cankun Factory Xaimen City, China” shows a veritable army of workers assembling espresso machines across football fields of space. The montage including “Manufacturing #17 Deda Chicken processing Plant, Dehui City, Jilin Provinence China” (2005) and “Manufacturing #18 Cankun Factory Zhanzhou, Fujian Provinence, China” (2005) presents a dystopian vision of Modernism gone horribly wrong. Division of labor is presented as a kind of militarized manufacturing as armies of workers in pink and yellow uniforms process chicken, eat lunch, and line up for work with Communist efficiency. Their awful stratification is rendered with a clarity that no amount of bright colors could possibly ameliorate.

If Andreas Gursky’s photographs are of the soulless commercial world rendered by modernity, then Burtynsky works at its frayed and imperfect margins that Capitalism tries to smooth over. That the artist depicts these deeply unsettling places through the lens of art history only serves to implicate the role of art in reifying modernity. Industry and consumerism on such a massive scale exacts a terrible price on the social and environmental spheres. These beautiful photographs invite us to calmly contemplate self-destruction without the spectacle of media driven hysteria. Despite the positive spin of the museum texts, there is nothing
re-affirming about Burtynsky’s worldview because he employs beauty. The strength of the critique lies in the illusions of beauty that the artist coaxes out of the terrible costs of modernity.