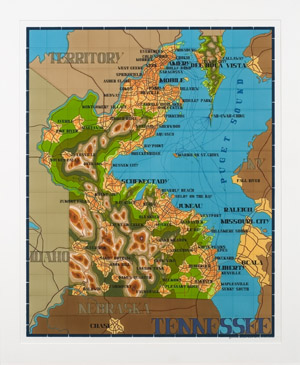 Maps have always served at least two purposes: to get people from point A to point B, and to demonstrate or set claim to domains of power and control. The further you go back in history, the more both of these functions become speculative—California was represented as an island on early maps of North America—and the more maps assumed an air of exploration. Today, satellite imaging allows us to visually depict everything from the coherent shapes of continental landmasses to the streets in a small midwestern town. And with tools like Mapquest and Google Earth only a click away, location—and the act of locating—seems more then ever under our rational control.

Lordy Rodriquez takes our modern-day premise and reinvests it with the spirit of willful exploration. His maps are factual and wholly fictitious: guided by a combination of knowledge and imagination, he both represents and renounces American geography as we know it. Since around 1998, the artist has been reconfiguring the United States into a continent better suited to his own particular leanings. Working from a master key map he devised for the entire nation (whose own boundaries and borders have been exploded and recombined), his project is the reformation of the country, state by state.

The earliest maps look like road atlases or city street plans; they are earnestly rendered and full of detail. Over time, the states have evolved into extraordinary topographical arrays, where the shifting geologies are expertly rendered and meticulously drawn. By giving up some of the factual precision of the early pieces—for example street names—Rodriquez maximizes cartographic tools like contour lines, borders, and color codes, and delivers a more coherent geographic overview. A series of these are on view at Clementine, and they demonstrate the artist’s very strong sense of color: land masses and water ways come together to form gorgeous lush abstractions of pinks, blues, browns, and greens, and the pieces have a chromatic harmony and formal engagement that is impressive in its own right.

The beauty of Rodriquez’s work, however, can distract from the more weighty implications of his mapping project. Although the work is tempered with humor and idiosyncrasy, there is a strong sense of justice and retribution in the way geography has been recreated. In Rodriquez’s America, small states get larger, cold states get warmer, primary ports become secondary passages, red states shift to blue territory, and so on. Texas, his home state, finds itself blessed with the longest coastline in the country, while Alaska squishes landlocked between Indiana, Montana, and Iowa. New Hampshire is depicted as a tropical archipelago, while West Virginia is shaped a lot like Michigan and Atlanta has become its lake-front capital, with Chicago moved to a satellite site in the north.

These sorts of geography plays abound in a conceptual project that is simultaneously freewheeling and obsessively factual in its appropriation of the physical landscape. Rodriquez is scrupulous about not using real places more than once, and yet he delights in the freedom of defining his own locales. “Hollywood,” also on view, is one of the five fictitious states that Rodriquez has added to the map (others include Disney, Internet, Monopoly, and Territory States). A diptych, it’s made up of Hollywood and North Hollywood, and all of the locations come from places in movies or television. In these fake locales, Rodriquez demonstrates the power that certain industries hold in America, and seems to suggest that their psychological presence is powerful enough to merit their own physical place, an idea that is not at all un-compelling.

In this round of paintings, Rodriquez explores another new way of mapping: state as a portrait. While many of his other maps include personal references (for example, most have major port access, as has every city he’s lived in), and all reflect his personal priorities and prejudices, none before Kentucky have stood for a specific person. There, his ex-girlfriend Marci becomes the namesake for a city in Kentucky, and the state’s expansive salt mines stand as a symbol of their broken love. More explicitly biographical than other states, the inclusion of personal content explicitly demonstrates what other maps infer: that geography can be both universally objective and personally subjective, and that experience taints perceptions of place.

Rodriquez is near the finish of his American endeavor. Only two states remain: Texas and Territory, the mythical amalgam that includes Guam, Puerto Rico, and Samoa. Born of Latino descent in the former territory of the Philippines, and raised in Texas, both of these drawings offer the opportunity for self-reflection and possibly self-portraiture. Territory may also become the most overtly political work in the series, because it unites and joins these contested American outposts into the continental fabric of the United States. Regardless, to make these two last is in some way to come full-circle, for the artist began the project when he was a homesick SVA student—combining hometown Houston with New York. Now nearly eight years later, he has compiled a
geographic opus and it will be interesting to watch him plot out future terrains.

The Power of Intention: Reinventing the (Prayer) Wheel

The Power of Intention: Reinventing the (Prayer) Wheel brings together contemporary artists making work about intention, belief, and prayer with historical prayer wheels and related images from the history of Himalayan arts.

As the slow crawl of ballot counting across America began on November 3, Dragonfly/Robin Laverne Wilson performed her own crawl through the streets of New York. Dressed as a statue of fugitive slave Ona Maria Judge Staines, the artist summons the power of a living monument.