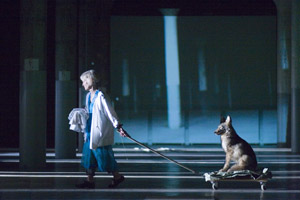 Conceived and directed by performance artist Joan Jonas with original piano score by Jason Moran, the central narrative focus of The Shape, the Scent, the Feel of Things is the unprecedented life and work of art historian Aby Warburg (1866-1929). Warburg has only recently come to recognition in the U.S. with the translations of his ground breaking Images from the Region of the Pueblo Indians of North America (Philippe 1995), of Aby Warburg and the Image in Motion by Phillipe-Alain Michaud (Zone Books, 2004); and with Doris von Drathen’s Vortex of Silence (Charta, 2005).

Man no longer fears the rattlesnake. He kills it. Certainly, he does not worship it.
–Aby Warburg

Although Warburg wrote extensively on Serpent Rituals, and witnessed many related dances and rites when he visited the American southwest in 1896, he never saw the Hopi Snake Dance. Joan Jonas did. Surely hers is the first complete artistic interpretation of Warburg’s thought anywhere, presciently putting Jonas on top of a wave destined to swell behind the resurfacing of Warburg, like that which
buoys Walter Benjamin.

Staged in the basement at Dia:Beacon, big as a Roman hippodrome, such capacious space affords sweep and playing field depth enough to realize any epic dramatist’s dream. Gently, Jonas rendered it devotional. Without excess, insecurity or indulgence, she commandeered it all, exhibiting sure personal authority, compassion and signature aplomb.

At a peak, Jonas impersonates an express train, squatting on her haunches, shaking and shuffling sheaves of sheetrock corner bead strewn on the concrete floor. Above, staccato shots of freight trains roar down screen.

The philosopher Giorgio Agamben claims Aby Warburg proved “the image’s biological necessity as a product between religion and art.” Necromancers, reverence, the voices of the dead, “theosotic dynagrams”: while referring to himself as a “seismograph,” magic words speckle both Warburg’s and Jonas’ works like cycling starry symbols. Never did she overdo, or lose the shining thread. Using only three performers, she kept instead to beauty, the coherency of constellations that leave a trail of breadcrumbs, which are perhaps a string of pearls.

In 1921, Aby Warburg was hospitalized for schizophrenia. In 1924 he gave a lecture and slide show at Ludwig Binswanger’s neurological clinic on the Serpent Dance, which won his release, vindicating his sanity. How can we now properly assess his perspicacious contributions? Breaking and remaking chronology, he treated history like memory, developing a system of aesthetic classification close to cinematic montage. He proposed the engram, a depth repository image, which subsequently became an allegory for Benjamin and the archetype in Jung. Using forty black canvases mounted with thousands of coordinated “pathosformel” pictures, his Mnemosyne Project prefigured the illustrated lectures of anthroposophist Rudolph Steiner and the chalkboards of Joseph Beuys. His practical applications of a schizophrenia at last put to good use, foreshadow the nomadic schizo rhizomes of Deleuze.

Warburg himself was compellingly played by José Blondet, an untrained actor, speaking from his clinic bed. Originally conscripted by Joan Jonas to just move props, Blondet says he then became one. Confirming parallel lives, he waves his hands with glee. “You know she’s completely crazy!”

The word made flesh. Diary as dance. Nearly Messianic, Warburg’s vision of the image invokes its active return, transmitted through affective affinity with future cultures. Jonas does not repeat the Snake Dance, but transforms it in herself, just as she treats Warburg’s work, transmuting past to present while fusing distance. This she calls a “dialogue,” adding that she “did not wish to impose on, or take away from, the Native American people.” I can conceive of no more convincing testimony to Aby Warburg’s sanity than to see his work reappear in her art today. The flickering picture that lingers on is of her big steel laterally spinning wheel, flattening out in calm seraphic spirals, left descending alone at center stage, ringing her own work down through the ages.

For this interview, conducted remotely from her studio in Istanbul where she currently resides, Hennix wanted to talk about music as a sonic or vibrational practice, and the ways that in the coronavirus-related lockdown, the enforced stasis that we face could become the site of new kinds of discovery and recognition.

Some Thoughts on a Constellation of Things Seen and Felt

This summer’s persistent melee of images and videos circulating in news reports and on social media of the extrajudicial, gratuitously violent deaths of George Floyd and Breonna Taylor and the collective uprisings they incited under the mantra Black Lives Matter drew me out of the intensity of that present moment and into a descent imbricated and wedded by the beholding of the inextricable combinatory assembly that is embodied Blackness, acts of barbarity, and a yearning for intimacy.

Is this the real life? Is this just fantasy?
OZET Lands at The Brick

Upon first witnessing this work in 2012 I was immediately disoriented by the specificity of the world. As if walking in on the middle of the narrative, I kept asking myself, “Am I missing something?” Not that I didn’t feel cared for, but that, by design, it didn’t matter which part of the story I entered—the audience is a welcome addition at any point in the ever-expanding world of the OZET.