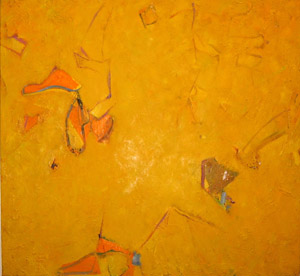 Paint, the essence of paint, the substance of paint, the materiality of paint, the culture of paint. Geoff Dorfman is an artist who has spent the better part of the last three and a half decades immersed in the implications of what it means to be painting now. He’s an artist for who the flame of the Abstract Expressionists and the New York School still burns hot. These are paintings about painting. There are no ironies, no clever theories, and no subversive aesthetic gambits. The discussion of these paintings requires one to use the language of painting as reference to other things would be mere allusion. A few other painters working today like Scott Richter or Geoff Davis have developed a type of flatfooted pragmatism that makes use of paint as a kind of quasi-sculptural medium, focusing on its mass, its chunkiness, and the bravado of a glob of paint. Dorfman conversely is also committed to the notion of the classic brush stroke, the sensual rebound and multitude of responses possible with bristles rubbing on canvas.

For any artist working as long as Dorfman has, it’s a constant challenge to avoid formula, to try to keep their facility from becoming a limitation. “If the paint begins to look like something besides paint, like sky or water I change it,” he stated. The pictures seem to be constructed out of a negation of anticipated action, a struggle to maintain the creative momentum by proceeding in the most unexpected rather than expected ways. This requires the artist to work in an almost hyper-conscious state, being aware of the precedents that should be avoided while continuing to construct the pictures with a coherence of composition and chromatic design. Ironically, these painted negations or erasures have the opposite action from the philosophic or rhetorical negation. In the painted case, they are objects of suggestive potential.

As a friend and acolyte of the late Milton Resnick, Dorfman painted “Death Dream” with an echo of the older painter’s grand style of overall mottled surface. He does, however, use a thinner paint application, and a wider spectrum of colors and strokes that culminate in a shimmering warm golden brown key. Three or four small shapes delineated with dexterous line as well as shade are composed of pale yellows, earth greens, violet, and orange. They are scattered from the center to the lower left and hint at the multiple tints that are contained under, and that add vibrancy to
the dominant brown.

Peripheral vision and the ability to use it as a way of “seeing” without actually “looking” is another perceptual mechanism that Dorfman learned from Resnick, “It’s kind of Asian, a sort of Zen way to receive clues on how to proceed, on what the next move should be.” At an initial glance, “Tree of Life” is a brilliant mostly yellow painting with flickering small forms in thick orange impasto, a few spare lines drawn with a browned maroon and turquoise, could allude to fall foliage or indistinct body parts as they zip through the composition. After a few moments the richness of sublet variations of ochres, lemons, and chartreuses subsumed, though not totally masked by the final field of cadmium yellow become visible. Some lines are laid in with calligraphic improvisational aplomb. Others are remnants of under-painted forms carved down to thin ligaments by the final skin. A slow buildup of petting strokes leaves the impacted surface with a fluttering glow that fluctuates between the closely keyed hues.

During a conversation it was refreshing to hear the painter refer to the “culture of painting” or the “painting culture.” This cultural commitment has motivated Dorfman to compile and edit Out of the Picture: Milton Resnick and the New York School, an unvarnished depiction of downtown life, and a must-read for anyone interested in the realities of the practice of painting. He is also, along with Karen Wilkin, co-curator and catalogue contributor for the upcoming show Hans Hofmann: The Legacy that will be presented at the Painting Center this November.

With the rapid proliferation of media available to artists today, the privileged position that painting once held is no longer dominant. It is however fascinating to ponder the anthropological and cultural relationships an artist can have with a 50,000 year old tradition that just aren’t available to someone working within a ten—or forty-year-old tradition. For Geoffery Dorfman this relationship to painting is a direct inheritance from his association with the New York School. For the spectator, it’s an opportunity to observe a journeyman practitioner facing the trepidation and adventure of maintaining a vision while he pushes into the future.