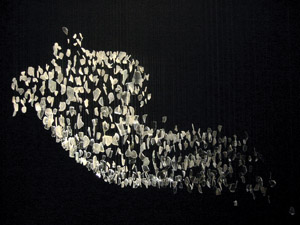 The difficulties of El Museo del Barrio’s mission are reflected in the conflicting statements and provocative questions raised by The (S) Files/The Selected Files, the museum’s first attempt at a biennial of contemporary art. The institution’s founder, Rafael Montañez Ortiz, strongly believed that education was crucial for the Puerto Rican immigrant population in New York to transcend poverty and integrate and assert themselves in a larger American culture. As a working artist and public school teacher, Ortiz felt that art exhibitions would play a major role in strengthening cultural identity during this assimilation. Further, El Museo works to present and preserve the art and culture of Puerto Ricans and all Latin Americans in the United States, lest it be lost during this assimilation. Yet developments in identity politics elevate a certain pride in “difference,” a celebration of ethnic uniqueness that annuls the outmoded, idealistic concept of the “melting pot.”

The biennial’s three curators—Deborah Cullen of El Museo, Miki Garcia of the Santa Barbara Contemporary Arts Forum, and Marysol Nieves of the Museo de Arte de Puerto Rico—aim to “define Latino and Latin American art given a post-colonial, globalized context.” Judging by the work on view, it’s often difficult to distinguish what is specifically “Latin” about the forty included artists apart from Spanish-sounding names on wall labels. None of the artists share any similarities in style or subject—as if there were Latino ones to begin with—nor do they share any significant differences in style or subject from mainstream art trends. In fact, despite having roots in the Caribbean and Central and South America, nearly all the artists earned MFAs and BFAs in the States.

Mixed-media works by Marisa Tellería-Díez, fantastical landscapes by Alejandra Villasmil, and collages by Fay Ray wouldn’t look out of place inside Chelsea galleries such as Clementine, Bellwether, and Daniel Reich. Ditto Patricia Zarate, Claudia Peña, and Alfonso Muñoz. (The duo of Delia Gonzalez and Gavin Russom, who contribute a set of mirrored-aluminum sculptures that are part-shrine and part-vanity, do show at Reich).

Consequently, works that engage Latin American cultures hold the most interest. Like Ana Mendieta, Cristina Hernández-Botero draws on both pre-Columbian and postwar avant-garde traditions. For “Pectorals of Light,” she covers five light boxes with the imprint of her chest, which was covered with gold pigment from Columbia, addressing rituals of ancient warriors through the glow of modern advertising. Richard Garet’s “The Liberation of Meaning,” an audio collage comprised of fragments of poetry read by the Uruguayan poet, novelist, and journalist Mario Benedetti, uses chance methods—random play on an iPod—to create new combinations of phrases, and thus new meanings.

The most stunning work in the show combines beauty and critique: Milton Rosa-Ortiz gathered broken glass from the beaches of Guánica, the site in Puerto Rico where invading American forces landed during the Spanish American War. Hung from the ceiling in front of a window, the fragments take the form of not only a cloud, but also ancient Greek pediment sculpture. The Parthenon in Athens was rebuilt in part to commemorate military victory over the Persians, but as history shows, times of peace are fleeting—just as a cumulus cloud can dissipate after only a few minutes.

Rather than offering a sprawling exhibition or promoting an overreaching theme or agenda, The (S) Files reclaims the tightly curated group show, a rare accomplishment among today’s indistinguishable biennials. Works in the same room relate to each other without being obvious. Figurative painting by David Antonio Cruz and Patricia Cazorla face each other on opposite walls. As many artists abandon identity politics, Cruz’s self-portraits—three large oils on canvases that play with gender roles and representation—are refreshingly relevant. In the same gallery, Adria Marquez’s abstract monochrome self-portraits with pressed-powder make-up reference her experience as a light-skinned person of Cuban descent. Entitled “Foundation,” the drawings recall older work (Byron Kim’s skin-pigment paintings and Ed Ruscha’s gunpowder and vegetable-stain drawings) that also explores these conceptual and formal elements. Elsewhere, David Cabrera’s and Raymond Saá’s floral imagery decorate two ends of another gallery, which also contains Nicola López’s cascading fall of electronic equipment, air ducts, tubes and hoses, power lines, and steel towers (black-ink woodblock prints on Mylar pinned directly to the wall) as well as Diego Medina Rosas’s flower-and star-shaped wax objects constructed with skull forms—images of life and death.

Given our increasingly globalized world—where distinctions between local cultures and multinationals compete, collide, and collapse—works in The (S) Files that address economic situations are especially weak. Michael D. Linares documents himself stealing a pack of gum from a Wal-Mart in Puerto Rico, only to have the film developed (and paid for) at the same store. Ten photos, receipts, the gum packaging (all pieces chewed, of course), and a “certificate of robbery” are displayed in a glass-covered display case. The work’s message is clear: no matter how disgusted we are with megacorporations like Wal-Mart, we end up spending money there anyway—but the work’s form and presentation are juvenile. The collaborative duo Caraballo/Farman project staged video footage of a woman peddling cold drinks and a man offering currency exchanges on the streets of an unknown Latin American location, but this portrait of the bottom end of the “black market” offers no
resistance or redemption.

While The (S) Files advances Latino art as a whole, it also presents Latin America as a seemingly homogenized place. What’s the difference between a Puerto Rican’s and a Colombian’s worldview—politically, socially, aesthetically? The exhibition fails to illuminate differences and conflicts among the hemisphere’s countries, cultures, and people. A notable exception is Carlos Motta’s “SOA: Black & White Pain-tings,” an audio work and artist book that explores the questionable American containment of communism in Latin American countries after WWII.

The works of art in The (S) Files raise interesting, important questions. Does aesthetic integration into the art-world mainstream necessitate a rejection of cultural heritage? Does this newly evolving “international style” trump social advances made since the 1960s? Are Latino and Latina artists responsible for producing work that references or affirms their background? Are those who don’t, reacting against a potential ghettoizing of their work? How does this exhibition bridge the gap between an informed art audience and the museum’s core constituency, the residents of Spanish Harlem? The (S) Files, far from offering a thorough definitive answer, offers much to think about.