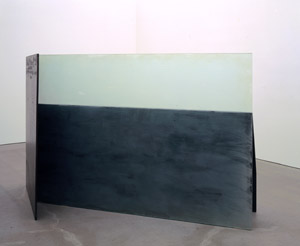 Chris Wilmarth wrote country music and loved it enough to contemplate giving up sculpture for it. Like his sculpture, his songs are without frills. They’re rough around the edges and wistful, with a strong dose of nostalgia straight out of the blues. His voice is high and nasal and has a bit of Dylan and a bit of Guthrie in it. Hank Williams was his favorite.

Like Williams, Wilmarth’s found success did not sit easy with him. He could not tolerate commercialism in the art world. He saw it as destructive to the spiritual fabric that knits an artist’s life to his work and battled this exploitation constantly. He wrote letters of protest to the papers, expounded publicly on art world fraudulence and finally opened his own gallery, the Studio for the First Amendment, to show his work in Soho. He even picketed a resale exhibition of his work at André Emmerich gallery. He thought it was exploiting his career to turn a quick buck. The tall, gaunt artist strutted up and down in front of the place with his bushy beard and a sign that read, “Fight feudalism in the arts.” He must have been a funny sight all by himself out there, but this was deadly serious to Wilmarth. In 1978 he wrote: “The structure of most dealer-artist relationships is decidedly feudalistic. A dependent position may be agreeable to some artists but it’s not to me.”

On the surface, the ambitious and focused California native achieved quick success in New York. By the time he was thirty, he had moved with apparent ease from his student days at Cooper Union to exhibiting in Soho, an NEA fellowship, a Guggenheim, and a professorship at his alma mater. But there was an undertow. In 1987, overwhelmed by depression, the man whom Robert Hughes called the greatest sculptor of his generation took his own life. A mini-retrospective at Betty Cuningham illuminates the scope
of his accomplishment.

Wilmarth loved the light. He saw people as synonymous with spaces and the light in those spaces as defining their essences. Early on in his career he is ecstatic, all precision of design and clarity of thought. He used glass to trap light and steel to set it off. He made things into places and places into experiences, and I imagine that in the early and mid seventies he must have felt something like an out-of-body experience. “Alba Sweeps,” “Long Leavers Gate,” and “Invitation #1” are all portals. The light in the steel framed, acid bitten glass distorts perception. It invites you in to contemplate form’s dissolving borders and what might
become of you should you somehow find a way to penetrate that misty surface.

If Wilmarth had been uncomfortable in the 1970s, he must have been claustrophobic by the time the neon eighties rolled around. The world had changed. The money rolled in; the art boom was on and all bets were off. Perhaps in response, his sculpture became earthy. In 1980, at the end of his mission statement for the Studio of the First Amendment, he wrote, “No longer is heavenly distance the preferred escape. The learning self defends.” He discovered glass blowing and instead of planes, his glass took the forms of increasingly dense orbs. “Delancey Backs,” completed in 1986, seems to suck light away. If his early work was a portal, this is a void, cold and beautiful. Wilmarth showed that, contrary to the prevailing minimalist ideology, industrial material did not have to carry the baggage of post-industrial society. In a poet’s hands glass and steel could be the stuff of dreams.

Wilmarth came of age in a younger art world. The Chelsea Juggernaught did not exist and Soho was the center of art life. There were still more galleries there than fashion goods. Artists could live cheaply and find time to work without a day job or a teaching position. Wilmarth made furniture in the early days to support himself and his wife. Though disparate styles vied for attention, there was still a sense of direction, of something new on the horizon. Minimalism was in full throttle, confident in its excesses. Its ethereal children, performance and conceptual art, were stirring things up. Pop had muscled its way onto the scene, and the opposing orthodoxies of these movements presented ambitious artists with lathes against which they might sharpen their skills and formulate their own philosophies. Though some artists began to grow rich, money had not yet become the measure of an artist’s success.

Now, as everybody knows, anything goes. This gives artists a chimerical freedom that the market then takes away. You can watch young artists shrug their shoulders: “Don’t worry man—take good slides. Someone’ll pick you up. You’ll get used, but you’ll get paid.” And why not? New galleries open all the time. They move from Brooklyn to Chelsea. The banks have art consultants. They’ll rent your paintings, and then hike the prices and loan to uptown businesses with an option to buy. Auction houses burn paintings. They put a Rothko on the block at a price so high that no one can buy it. Once it’s been up that high, it’s never coming back down except to the basement which is where they will stick it until a more favorable market presents itself. A consignor can put his own painting on the block and buy it from himself at an exorbitant price to boost interest in the artist. All they owe is the auction house commission. The publishing industry can also turn an artist’s molehill into a mountain by heaping catalogues on it just so long as someone pays up front. Meanwhile, an artist unwilling or unable to market—website, open studios, get to know the right people, etc.—can hope for little financial success. The young artist thinks: “Just get in, get your slice of the pie and get out – it’s the best you can hope for.”

Chris Wilmarth’s life and work offers contrary evidence. One knew his art did not grow from commercial forces, but from necessity. “Art,” he wrote in 1974, “exists for a reason. The reason is simple and often forgotten. Art is man’s attempt to communicate an understanding of life to man. To give in a sculpture what I understand; to imbue concrete things with parallels to human feelings; to do this in a real way; to be believable in my purpose.” He willed his cowboy’s voice to be heard above the din. It summons artists to sing, paint, sculpt, dance, write, and organize a world in their own image. Wilmarth’s travails are in part evidence of the difficulty of such a task, but his accomplishment is incentive enough to proceed. The artist is of consequence. An exhibition, a sale, or a publication is a fine thing as long as it doesn’t distract from the search for a space where
the light is just right.

Far from the image of the conceptual artist (who, after WWII, called his works Concetto Spaziale), swiftly slashing the canvas while keeping his hands clean, the exhibition of Lucio Fontana’s sculpture at Hauser & Wirth shows how the Italo-Argentinian artist handled space throughout his forty-year career, from the late 1920s to his death in 1968.

In New York this new year, the exhibition with the most argument, conjecture, and consequence is the Metropolitan Museum’s Chroma. This somewhat sly intervention means to reintroduce the presence of color in classical art.

The two decades covered by this show—1965 to 1985—were filled with experimentation and change in art. Important movements such as Minimalism and Conceptual art achieved maturity, along with performance art and installation work. Moreover, the influence of Pop art hovered over the different visual undertakings, pushing art in the direction of a demotic accessibility that had not been visible before.