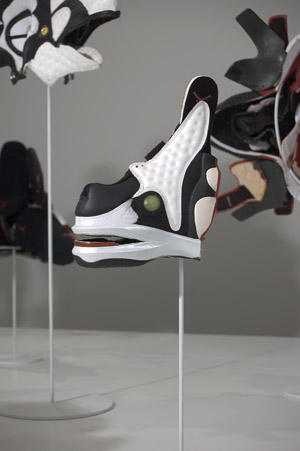 Following his 2004 installation at Triple Candie of a life size basketball court made of 224 sweatshop tables, Brian Jungen revisits New York with an extensive survey of works from 1993 to 2005. A leading member of a new generation of Vancouver artists, Jungen covers the entire ground floor at the New Museum’s transitional location in Chelsea, a thorough presentation that reveals Jungen’s impressive range of expression.

Gigantic whale skeletons dominate the main space. From afar, “Cetology” (2002), “Shapeshifter” (2000), and “Vienna” (2003) seem familiar to those frequenting the natural history museums, but upon closer inspection, the intricately fitted bones reveal their true source: they are cut up pieces of ordinary white plastic chairs. Suspended from the ceiling, they translate into otherworldly creatures, which hover almost ghostlike in mid-air and encourage the audience to walk up close. Ribs ceaselessly turn into surreal archways, and shafts between bones seem to frame awkward walkways, manifesting a strong sense of lyricism: underneath all these plastic scraps, outmost tranquility can be found. It is Jungen’s ingenious alteration of existing materials, part accomplished craftsmanship, part provocateur of unusual associative bonds between former object and finished work, that makes his art astounding and hard to predict. When addressing his preference for pre-existing materials in conversation with Matthew Higgs in 2003, Jungen explained that it was witnessing his mother’s family (members of the Dane-zaa, First Nations people of the Peace River region of northeastern British Columbia and northwestern Alberta) recycle objects in ways that were unrelated to their former function, that largely influenced his sensibility for materials and how they relate to the outside world.

The notion that everything is transformable and that the designated purpose and appearance of objects are only transitionally definable, remain important themes in Jungen’s work, including his collection of masks made of Nike Air Jordans entitled “Prototypes for New Understanding” (1998-2005). At the New Museum, all twenty-three masks (23 being Michael Jordan’s uniform number incidentally) are arranged in a separate room, marking the first time that this complete set has been exhibited as a group. Looking at the many animal inspired silhouettes, gaping mouths, bulging eyes, and the occasional flowing black hair, one finds oneself equally unsettled and in awe. While some masks radiate serene nobility, others seem aggressive and even terrifying. As a collective, they spit their implicit social commentary at our feet. Stylistically reminiscent of red, black, and white Northwest Coast Aboriginal masks, yet made of expensive basketball sneakers, “Prototypes for New Understanding” examines the metaphorical disguise of prominent Western consumer products as objects of desire and worship. Ironically, it is when forced to resemble true native ceremonial artifacts that the Nikes lose any prestigious value they might have had for wannabe hipsters. Growing up in the central region of British Columbia to a Swiss father, and with his mother’s ties to the Dane-zaa, Jungen grew up intimately aware of two opposing realities, the Western world and Aboriginal culture. As their titles suggest, each “Prototype for New Understanding” points at the necessity for the re-iteration of cultural abuse and chauvinism, as much as it serves as an example of the fusion of contrary beliefs and aesthetics.

Similar in nature, “Collective Unconscious” (2005) features an intricately carved baseball bat reminiscent of the visual vocabulary found on Aboriginal totem poles. The small scale of the bat, as well as the contrast between Jungen’s contributed craftsmanship of the carving and the generic cut and polish of the chosen object enhance the tension inherent in this unusual union. By using a baseball bat, one of the most powerful symbols for Western sports and its heroes, Jungen draws attention to the spiritual significance of totem poles for other cultures. Maybe it is only when forced upon its most celebrated objects of obsession that the ignorance that prevents Western cultures to honor or even recognize foreign beliefs can be overcome.

Much more minimal in appearance, “Isolated Depiction of the Passage of Time” (2001) features several stacks of cafeteria trays assembled on a handcrafted cedar pallet, their varying shades of reds, oranges, and yellows forming a rhythmic pattern of horizontal lines. The work was inspired by an object built in 1980 by a prisoner at Canada’s Millhaven Maximum Security Institution, who used a construction of hollowed out tray stacks to reach the prison’s low security section, where kitchen supplies were cleaned and from where he thought it possible to escape. Against this background, Jungen’s seemingly formulaic display transforms into a poetic homage to the desperate human need for freedom. But the riddle is even more complex. Whereas the number of trays used in Jungen’s work directly relates to the number of Aboriginal males imprisoned in Canadian penal institutions, each of the five colors marks the severity of their prison sentence, ranging from lifelong to under three years. Hidden at the hollow center of the work, is a television set, from which only a muffled sound penetrates the plastic walls, the vibrating leftovers of random daytime programs and soap operas. If one were to put much energy in uncovering this hidden secret and find only endlessly repeating TV shows at the construct’s core, the revelation would feel rather anticlimactic. Is that what our dreams are shattered with, shallow televised bubbles? In Jungen’s reinterpretation and transformation of the ordinary we can hope to discover something more meaningful.

Instigation, Aspiration, Perspiration, form a triumvirate of Pope.L experiences that are, or recently have been, unfolding across New York this autumn. Alongside Choir at the Whitney, member: Pope.L 1978–2001 at the Museum of Modern Art presents a historical survey of some of Pope.L’s most significant performance works. The opening of these shows in October was backdropped by Conquest (2019), a performance commissioned by the Public Art Fund that took place in September, where Pope.L coordinated more than 140 volunteers to undertake one of the artist’s venerable Crawl pieces through the streets of lower Manhattan.