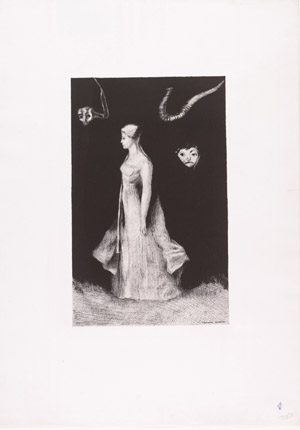 Symbolist, member of the Decadence group, and a proto-Surrealist, Odilon Redon (1840–1916) was a native of Bordeaux, a painter and graphic artist, who composed his enigmatic art works sort of “like music.” He used to say: “My drawings transport us to the ambiguous world of the indeterminate…imbued with a melancholy passivity.” This was consistent with the moods of Symbolism: nocturnal, autumnal, and lunar. During the early part of Redon’s life, the nocturnal predominated, influenced by the “noir-drawings” of Goya thus revealing his daydreaming personality. “My originality,” wrote Redon, “consists in bringing to life…improbable beings and making them live according to the laws of probability, by putting—as far as possible—the logic of the Visible at the service of the Invisible.” His participation in Mallarmé’s poetical-literary salon also left a mark on his art and his aesthetics. Redon represents the microscopic, the botanical, the half-human as in his drawing “The Chimera regarded All Things with Terror” (from the portfolio Night) or half human and half fish “Everywhere Eyeballs Are Ablaze,” his illustration from The Temptation of Saint Anthony.

The exhibit Beyond the Visible: The Art of Odilon Redon at the Museum of Modern Art, organized by Jodi Hauptman, Associate Curator, Department of Drawings, has the full spectrum of Redon’s fantasy playfulness—mysterious charcoal “noirs,” bizarre and contorted drawings, luminous pastels, richly textured canvases, and amorphous shaded lithographs. They all come from MoMA’s unparalleled holdings, including a major gift of over 100 pieces from The Ian Woodner Family Collection.

The artworks are arranged chronologically, emphasizing Redon’s preference for illustrations, portfolios, and his literary aspirations. His mature production began in Paris, around 1875, when Redon entered the shadowy world of charcoal and the lithographer’s stone. From that time until his fifties, he worked almost exclusively in black and white, in charcoal drawings and in lithographs. In his work he developed a distinctive repertoire of surreal subjects, strange amoeboid creatures, spiders with human faces and plants with human heads. During this period he was influenced by the writings of Edgar Allen Poe, Charles Baudelaire, and Gustave Flaubert. This period yielded sequences such as Guardian Spirit of the Waters (1878) and Cactus Man (1881).

Homage to Goya (1885) is a portfolio of six lithographs ranging from a dream (“In my Dream, I Saw in the Sky a Face of Mystery”) to “The Goddess of the Intelligible,” with her severe and hard profile representing together a group of works as in an exhibition. Redon made it clear that his art was inspired by his dreams, and they in turn, seduce the viewer into believing this dark dream. Only later did he admit
the light of day.

It was only in the 1890s that Redon began to use the luminous, musical tones of pastels and oils, noted the art historian Michael Gibson in his book Symbolism. These became the dominant media of the last fifteen years of his life. Redon’s art was always commanded by his dreams, but the thematic content of his work over his last twenty years was more densely mythical, brimming with newfound hope and light which rose quite unexpectedly out of the depths of the artist’s personality. This is particularly apparent in the various canvases depicting the chariot of Apollo, the god of the sun. He remained virtually unknown to the public until the publication of J.K. Huysmans’s celebrated novel A Rebours in 1884. The book’s hero, an outlandish aristocrat who lived in a private world of perverse delights, collected Redon’s drawings exclusively. Redon’s talents finally became well known to the general public.

During the 1890s Redon turned to painting and revealed remarkable powers as a colorist, using lush pigments. After undergoing a religious crisis in the early part of that decade and a serious illness in 1894–95, he was transformed into a much more cheerful personality, expressing himself in radiant colors of mythological scenes and flower paintings. The flower pieces, in particular, were much admired by Matisse, and the surrealists regarded him as one of their precursors. The unhappy eyes of a hard boiled egg in the cup “The EGG” (1885), ready to be eaten, was a caricature worthy of Dalí, and the human tadpole with a long tail flying in the sky, is worthy of a poem by Tzara. Redon’s fascination with words can be traced to his early art critiques (he wrote on art in 1860s) and also can be extrapolated from his poetic titles, such as “The misshapen Polyp Floated on the Shores, a sort of smiling and hideous Cyclops.”

“Underwater Vision” (1910) is populated by anemones, sea horses, and corals, about which the artist comments, “You will feel the poetry of the sands, the charms of the air of the imperceptible line. While I recognize the necessity for a basis of observed reality… true art lies in a reality that is felt.” True to his words, in a drawing called “The Heart has its reason” (1887) a man with a right hand enters a slit in his chest and feels his own heart. Caught between description and dream, the observed and the imagined, Redon’s work transformed the natural world into dark visions and bizarre fantasies probing the limits of the imagination. Redon created a small universe of hybrid creatures, offered his own interpretations of literary, biblical, and mythological subjects, and presented the dream environment in a poetical prose. His work is filled with grinning disembodied teeth, smiling spiders, winged chariots, and unfamiliar plant forms.

Seeing the artwork close up challenges the retina and the mind. Each work can be studied over and over, discovering new details at each gaze, mostly between flora and fauna. Today Redon imitators create art that is categorized as “magic realism,” but he went much further than that by inventing “magic surrealism.” This exhibition explores the beginnings of modernism, and illuminates the impact that Redon and his vision had on the art of the twentieth century.