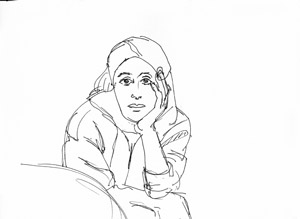 Two years ago, the Peter Blum Gallery held an exhibition called “Alex Katz: Cartoons,” which raised some entertaining questions about the role of intentionality in the creation of a work of art. The drawings on display were essentially by products of the process Katz uses to compose his large-scale paintings. Taking his cue from Renaissance fresco technique, Katz first works out his design with charcoal on paper and then transfers it to canvas by dusting dry pigment through pinholes pricked along the outlines. The resulting accretion of accidental marks—flecks and erasures and tiny explosions of color—created startling and sometimes ravishing dissonances across Katz’s hard-edged contours.

But the utilitarian purpose of the drawings—and the serendipitous nature of their more seductive effects—seemed to add a new wrinkle to conceptual art’s assertion that an idea qualifies as art even in the absence of an object: can an entity that acts as the midwife between an idea and an object enter the realm of art as well? Did Katz regard these drawings as art while he was making them, or only after he peeled them off the studio floor and decided to show them in a gallery? And how legitimate is it that those gorgeous puffs of burnt sienna pigment were not the result of an aesthetic decision but an aftereffect of the cartoon’s function?

These thoughts are especially tantalizing with an artist as deliberative and guarded as Katz, whose output seems to define high art as the well-made object. His impeccably polished, mechanized approach has lent itself most successfully to the production of prints (see, if you can, the absolutely lovely aquatints from his 1978 Face of the Poet series, currently hanging in MoMA’s Prints and Illustrated Books galleries), while his mural-sized paintings often feel constrained and stilted.

If Katz’s exhibition of compositional cartoons was uncharacteristically revealing of the sweat he pours into his art, his current show at Blum, First Sight: Working Drawings from 1965–2002 really goes for broke. Four hundred letter-sized studies are chronologically arranged in an enormous grid across the gallery’s walls. The humble diversity of media—pencil, felt-tipped marker, red ink, ballpoint pen—and the varying quality of the paper, much of it irregularly cut, suggests that Katz picked up whatever was at hand whenever the spirit struck him. Spontaneity is the surest route to the soul, and these unmediated images, many familiar from the paintings that grew out of them, expose a much more candidly emotional and aesthetically open sensibility than you’d expect of an artist invariably described as the coolest cat in the business.

The other surprising inference drawn from this show is that Katz is at heart a caricaturist. His scribbly sketches of soirees in “Cocktail Party,” 1965 and “Evening,” 1972 go straight for the facial peculiarities of each guest, often wittily (another quality not necessarily connected with Katz), but devoid of cruelty or condescension. Caricature doesn’t inherently imply flippancy or satire; it can be a vessel for intense emotion (what’s German Expressionism if not a form of caricature?) or a sign of observational acuity. In four successive studies of Larry Rivers at his easel, each depiction of Rivers’ face differs markedly from the others, as if Katz’s fingers responded instinctively to shifts in the mercurial painter’s mood. And in “Pas de Deux,” 1983, Katz’s rapidly dashed-off lines transmit a real psychological charge between the dancing couples that’s drained from the more schematically rendered paintings on the same theme.

The exhibition also confirms things we already know about Katz—that he’s hardworking and a gifted colorist. There are studies of mundane details, like a dinner table set with plates and goblets (“Supper,” 1973) or a couple of aluminum chairs (“Thursday Night,” 1974). More visually rewarding are his tonal studies, in which he achieves an astonishing luminosity through shades of graphite (“Night #2,” 1976) or nearly abstract strokes of black ink (“Ada’s Silhouette,” 1996 and the curiously titled “My Mother’s Dream,” 1998).

Other drawings serve up a raft of imponderables about the choices Katz made as a member of the first generation of American artists, born in the 1920s, to reconcile representational art with the precepts of Abstract Expressionism. Perhaps it was a reaction to the high seriousness of the AbEx era that led Katz to lock down his compositions as rigorously as Mondrian. But after looking over his sketches, you have to wonder what he might have done with a more fluid, open-ended style.

The free-floating forms of “Bond Street,” 1998 or “Goldenrod,” 1999 hint at an Asian-influenced suggestiveness far more impressionistic and quavering than his trademark latter-day precisionism. And his searching portraits of his son, Vincent, and wife, Ada, relay a depth of feeling that’s systematically flattened and distanced in the transition from paper to canvas. While gazing at a cozy and serene image like “Morning Coffee,” 1977, you may find yourself wishing that Katz would turn it into a painting free of his hard, bright surfaces, releasing him for once to unreservedly express the small but perfect joy of waking up with someone you love.