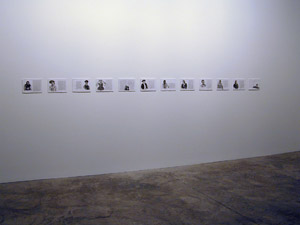 Americans’ relationship to American history has always been personal, ambivalent, nostalgic, and prone to delusional fantasy. When Cotton Mather, infamous for his pivotal role in the Salem witch trials, sat down to write biographies of the early Massachusetts Colony patriarchs, he did not write about the daily struggles of men in a then remote and often embattled settlement, but about how the course of their lives conformed to Biblical types. And when Thomas Jefferson wrote his Notes on the State of Virginia, he was not only replying to the great French natural historian George de Buffon’s claim that the flora and fauna of North America are inferior to those native to Europe because of the New World’s distance in time and place from where Noah’s Ark finally ran aground, but he was also arguing for the singular character of America. America’s conception of itself is about renewal, reinvention, and redemption, and this has been further promoted by the dominance of forms of Protestantism that emphasize a visionary and sometimes ecstatic relationship to Jesus. America is a heretical religious concept, not so much part of secular history, as its shining exception and terminus.

For his brilliant new two-channel video projection at Postmasters Gallery, “Godville,” Jerusalem born, Berlin based Omer Fast conducted interviews with eighteenth-century character interpreters who live and work in the “living history museum” in Colonial Williamsburg, a popular tourist destination in Virginia. Fast initially interviewed ten people portraying men and women of different social classes and backgrounds; the final version of the video contains three of those interviews. The interviews began with the interpreters speaking in the voices of their eighteenth-century characters, then about themselves and the present, but Fast has edited the interviews, collaged them together, so that the present and the past, eighteenth-century Williamsburg and twenty-first-century theme park Williamsburg, are fluidly and often indistinguishably intertwined. On the opposite side of the suspended screens, and interspersed between the interviews, are scenes from the surrounding area: mountains in full autumn color, factories, construction sites, a City Hall with a goofy giant dinosaur sculpture on the lawn out front. In the back room at Postmasters, there are drawings of each of the ten interpreters, along with personal anecdotes and accounts of Fast’s encounters with them.

Ariana stands at her locker, putting on her costume, a long silk baby blue dress laced up tight at the back, a pair of white gloves and a hat. She is clearly set to portray a woman of the upper classes. She is a tall, attractive, just slightly haggard woman in early middle age, and she speaks with an imperious drawl. She begins by talking about the social demands placed upon a wife as the hostess of a major estate, of the roles her sons are being raised to play—one managing the tavern, another overseeing the stables of thoroughbred horses. Despite the drab locker room background, and the increasingly unsettling absence of the person to whom she is speaking (Fast never actually appears in the video, and even his voice has been edited out), she is remarkably compelling, like an actress already deep inside her part while rehearsing her lines backstage. Then the image begins to stutter and skip, and her accelerating and compulsive monologue reveals, not just that her sons died in what one assumes was the Revolutionary War, but also that she believes she herself has been long dead and has the power to shuttle between centuries. “I keep going back,” she says at one point, “to let them know that what they feared is happening in the twenty-first century.” As the interview continues, her tone becomes nervous, raw and defensive, and she speaks of how her family, the family of an employee at Colonial Williamsburg’s living history museum, questions her sanity. “They think it’s all in my head,” she says, “because I don’t have photos of those who are dead.”

Will is the only African American in “Godville,” and he inevitably portrays a slave. The account of how he came to work in Colonial Williamsburg is of special interest. One day in church, Jesus appeared and came up to talk to him. When Will left the church, he slipped and fell, sustaining a head injury that caused him to go blind. Will had been told that Jesus is part of “living history,” and this had been demonstrated to him by Jesus actually appearing to him, so he took it as a kind of personal mission to transmit living history by taking a job with a living history museum. Jesus, however, returned, and was not amused; he accused Will of signing a devil’s contract with the white man. Unlike Ariana, Will is openly ambivalent, even confrontational, and the edits that carry his monologue along are jagged and disorienting. He quickly turns the questions back on his silent, invisible interlocutor, attacking his motives. “What can I do for you?” he says. “You want me to play songs and tell stories, is that what you want me to do?" Will is unsure whether the African American experience can be conveyed to a white man at all. But near the end of the sequence, he shifts into an evangelical mode. "Do you want me to help you get closer to God?" A little later he begins chanting: "God is a star, God is in jail, God is a transformer, God is an economist." Perhaps there is no such thing as "living history," but only a living God hovering outside of history.

Given the incredibly kitschy, tourist setting of "Godville," one would expect it to be ironical and even mocking, another instance of a sophisticated artist heading out into mainstream America full of contempt for people he is in no position to understand. But in fact the monologues in "Godville" are positively spooky. We naturally expect history to offer revelation, instruction, example, yet in "Godville" history becomes increasingly unintelligible, as though we no longer really know what it means for something to have happened in the past. The final monologue is by Jack, who portrays a kind of tough dandy who in real life did a tour of duty in Iraq and is now a member of a militia. When Jack speaks of the war, it is difficult to tell whether he is speaking of the Revolutionary War, the Civil War, or the Iraq War, and even his right wing moral screeds--"everything's muddy today, nobody knows right from wrong"--could have come from a different era. Like Will, Jack appears to bitterly turn on the interviewer. "It just snuck up on me that you aren't interested in me," he says at one point, sneering. "I know what kind of cliched character you're trying to make me into." The point is that we don't know what sort of character he is being turned into; the deep, queasy ambiguity Fast inserts into what appear to be narratives prevents anything from emerging clearly. And Fast's role itself is left enigmatic. Are these really interviews? To what extent were these interviews scripted? What effect did the editing have on the tone and context of what they are saying?

"Godville" is not Fast's first exploration of the intersection of fantasies about history and our entertainment and media oriented culture. For "Spielberg's List" (2003), for instance, a two channel video with a structure not unlike that of "Godville," Fast interviewed Polish people in and around Krakow who served as extras in Steven Spielberg's Schindler's List videotaping them, not in front of what remains of the Auschwitz concentration camp, but in front of the set for Schindler's List, which has become a tourist destination in its own right. "Spielberg's List" is a subtle, layered work that has everything to do with the powerful mixture of guilt and ambivalence over the fate of the Polish Jews that haunts contemporary Poland, and one of the things that emerges from the interviews is the disturbing degree to which the extras identified with and even fetishized their roles, an identification that is more closely connected to the film than to any knowledge of the historical events themselves. "Godville," by contrast, is a far more demonic and intractable work, in part because it puts its finger on an aspect of Americans' relationship to their own history that is still, and perhaps always will be, unresolved. Fast's unrepresented presence in the interviews feels threatening and palpable because the people being interviewed sense they have a stake in these stories, want to make a claim on them, yet they are unable finally to locate what that claim might be. They are suspicious. They feel deceived, betrayed. "You're treating me as an example," Will says, "not as a person."
An example of what?

Nostalgia for, and anxiety about history as a way of defining a fragile sense of American identity is by no means new. In the late nineteenth century, Bill Cody's Wild West Show offered reenactments of battles from the so-called Indian Wars and rituals performed by "real" Plains Indians at a time when it was falsely assumed that Native American culture had vanished completely. Decades later, Henry Ford created his own living history museum in the Michigan countryside in a village where people were paid to live as they once did in rural America prior to industrialization. History in America is always something that has been surpassed, the way the New Testament was supposed to surpass the Old Testament; American political rhetoric, from John F. Kennedy's rousing speeches to George W. Bush's crude, halting oratory is a testament to this. Americans long for the purity and legitimacy of an historical identity and an historical mission, but they are unable to acknowledge it except in the form of fantasy and entertainment, except in a form that offers immediate satisfaction. That may be the reason why the images in "Godville" of families in an elaborate indoor amusement park and of endless, identical, unfinished suburban track houses, are haunting and desolate.

Perhaps the price of living in this version of the "society of the spectacle," in this encompassing and hyperactive form of consumer capitalism, is that we are no longer able to subjectively internalize history at all, but can only fantasize about it in the form of a commodity. In his influential Notes on the Phenomenology of Spirit, French diplomat and scholar Alexandre Kojeve argued that Hegel's concept of the "end of history" should be understood as the end of the concept of the "human." At the end of history, we simply become biological entities that exist in an endless and specious present. Maybe that is where we unwittingly find ourselves now. Yet the "post human" condition turns out to be neither liberating nor utopian.

“It Seems Like a Waste … Of the Dramatic Situation”: Ryūsuke Hamaguchi’s Wheel of Fortune and Fantasy

With his audacious latest, Ryūsuke Hamaguchi tells three varied tales of desire and identity that cohere to forward an absorbing image of a world shot through with love and hate, destiny and chance, the real and the imagined.

Is this the real life? Is this just fantasy?
OZET Lands at The Brick

Upon first witnessing this work in 2012 I was immediately disoriented by the specificity of the world. As if walking in on the middle of the narrative, I kept asking myself, “Am I missing something?” Not that I didn’t feel cared for, but that, by design, it didn’t matter which part of the story I entered—the audience is a welcome addition at any point in the ever-expanding world of the OZET.