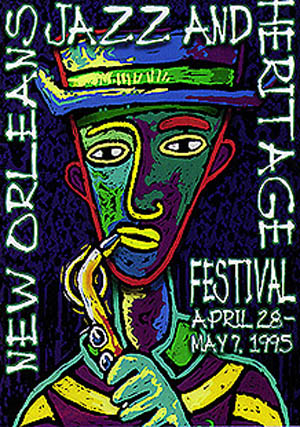 After sustaining what has been called “heavy damage” at the Fairgrounds Racetrack in New Orleans (such as having the roof of the grandstands torn off by 100-mph-plus winds), the organizers of the New Orleans Jazz and Heritage Festival, more commonly known as Jazz Fest, have announced that they intend to hold the event as usual in 2006. They admit that they will more than likely be forced to move the festival to another location (“preferably in Louisiana and as close as possible to New Orleans”), but as of this writing they declare that the show will go on. For those who have been following the Hurricane Katrina calamity, this notion may seem overly optimistic bordering on delusional, but as anyone who has ever spent time reveling in the music and the culture of the “Crescent City” knows, it would be unthinkable to cancel Jazz Fest. If anything, regardless of its relative insignificance at a time of gargantuan devastation and heartbreak, it now seems more important than ever.

New Orleans is not a town or a culture that is accustomed to surrendering. It has been confronted with wars, fires, floods, and the shame of slavery, and on it has marched. It has even faced down previous hurricanes, though none of this intensity and wide-reaching horror. Yet after the levees had broken and most of the city’s musicians had fled to higher ground, Lee Frank, the vice-president of Preservation Hall Recordings, was quoted in the New York Times as saying, “What other culture has a parade at a funeral? New Orleans is all about celebration in the face of death.” There might not be another place on the planet where music is more deeply woven into the fabric of society. There are other American cities with towering musical reputations (New York, Chicago, L.A., San Francisco, Seattle, Minneapolis, Detroit), but none of them are known for creating or showcasing as many different forms of music as the Big Easy: jazz, blues, swing, zydeco, hip-hop, cajun, gospel, rock and roll. The city has spawned a litany of famous and infamous musicians—Jelly Roll Morton, Louis Armstrong, and the Marsalis and Neville brothers, to name a mere fraction of the roll call. Hell, even Trent Reznor layed down some of his most ambitious Nine Inch Nails tracks in his Garden District home. Music is omnipresent in this town, from Preservation Hall and Tipitina’s to the Mid-City Rock ’N Bowl, Snug Harbor, the insider joint Vaughn’s Lounge, and on out to the busking musicians on Bourbon Street. New Orleans means gumbo, muffuletta, shotgun shacks, A Streetcar Named Desire, Tchoupitoulas Street, The Mississippi River, Mardi Gras beads, binge drinking, police corruption, riverboat gambling, and the French Quarter. It’s launched the careers of Tennessee Williams, Truman Capote, John Kennedy Toole, and Anne Rice. But to me and millions of others worldwide, Nawlins is a pulsing, raucous, loving celebration of music itself. All music.

While thousands of people fled the levee breach and countless souls lost their homes and lives, the music community was affected in its own traumatic way. Native Fats Domino was thought to be missing but was later discovered hiding out with the family of an LSU football player. The Preservation Hall band, in part, evacuated to the shelter of New York City. Alex Chilton was helicoptered out of his French Quarter home after being unaccounted-for during the first days of the deluge. On the other hand, Clarence “Gatemouth” Brown was among those who tragically didn’t survive the ordeal. Already suffering from cancer, his body gave out on his way to Texas. The number of not-so-famous local musicians who have suffered unimaginably is difficult to calculate and painful to consider. They’ve had their families and their instruments stolen by the floodwater.

In the mid-nineties, I attended Jazz Fest for several consecutive years. I’d been to music festivals before, but I’d witnessed nothing like the scene at the Fairgrounds. The first trip was 1994, and it was made to order, hot and humid, inundated with locals and visitors alike, and an all-time classic throw-down. “Twenty-seven crawfish dishes” in the concession stands. Alligator po’ boys, Abita beer, “hurricanes” (fruit punch and heavy rum), and heaping plates of jambalaya. As for the music, there was Little Richard, Max Roach, an astonishing gospel choir from Mississippi, and dozens more in the performance tents. The late Hunter S. Thompson even did a reading. It was open containers and an endless variety of musical exploration. Roaming from tent to tent trying not to lose my friends while meeting new ones, it was a party that suddenly spilled out into the streets and down to the French Quarter at the end of the day’s program. The following year I returned, by Greyhound bus from Los Angeles, for a friend’s wedding, and had my first experience with “Zydeco Thursday” at the Mid-City Rock ‘N Bowl. Bowling, dancing, and drinking were merely the backdrop to a driving, uproarious, delirium-inducing Zydeco scene that up to that point I had been oblivious to. I found myself enraptured by the gyrating bodies on the dance floor, the charging sound of the band, and specifically, the relentless scraping of the washboard player. We were on planet Nawlins and nobody wanted to go home.

Jazz Fest is the less-debauched cousin of Mardi Gras. It’s more focused due to its central location and streamlined theme. True, the midway is less than friendly to recovering alcoholics, but it’s an event that is really about the bounty of music that the city has to offer and the boundless spirit of its inhabitants. The first one was held in 1970, in Congo Square, attended by roughly three hundred and fifty people and featuring performances by Mahalia Jackson, Duke Ellington, and the Meters. By 2001, more than 650,000 people made the trip to the Fairgrounds Racetrack.

The organizers of the great event have faith that people will come out for it again in 2006, despite the state of the ravaged city and region that plays host to Jazz Fest each year. Hurricane Katrina has vastly altered the landscape of the city of New Orleans in ways that many feared were inevitable. However, the roots there run much deeper than the outside world could possibly fathom. Some families can still see their name on two-hundred-year-old tombstones in now-threatened cemeteries. Music is far more than an industry or urban motif—it courses through the hearts of the city’s people and resonates in its streets. The folks down there in the bayou need those sounds and rhythms now more than anyone can remember. It is certain to be a dreadful and grueling winter to contend with, but perhaps, at the very least, there will be music in the spring.

Todd Simmons is a writer/actor/improviser.

He lives in the East Village.