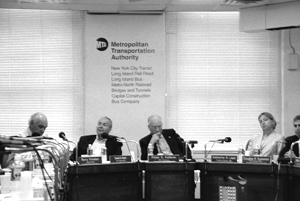 The humiliation begins at eight o’clock. It is catered. Bagels, coffee and juice, passed out along with “Jobs, Housing, and Hoops” pins. The union workers have already lined up, sporting the buttons and drinking coffee outside the MTA’s Madison Avenue headquarters, for the September 14 meeting to decide the fate of the Vanderbilt Rail Yards.

“I don’t even know what I’m supposed to do,” remarked Jared Armendariz of Queens, a member of the Carpenter’s Local 20-90, as he sipped his hot beverage. He didn’t know much about Bruce Ratner’s Atlantic Yards proposal—the one he was out to support. “Just what I’ve heard on the news,” he said, then added, with regard to the hearing he stood waiting to attend, “I take it today there’s a meeting or something.”

The union workers came out an hour and a half before the 9:30 a.m. hearing where the MTA would decide to accept the Forest City Ratner Company (FCRC) offer to purchase the Vanderbilt Yards. They were there to fill space and presumably to squeeze out actual Brooklynites. “Once a year, as part of the Union, you have to do some sort of picket duty,” Armendariz explained. “You’ve seen those big inflatable rats on the street? Usually that’s what I’m out doing.” No inflatable rat was in attendance that day.

It was a light turnout compared to previous meetings and events related to the controversial proposal that would plop seventeen skyscrapers (and counting) along with a basketball arena atop an existing neighborhood. Perhaps this is because the outcome of the meeting had already been reported by the New York Times the previous week, and was otherwise widely considered preordained.

First it marked out a race-course, in a sort of circle, (‘the exact shape doesn’t matter,’ it said,) and then all the party were placed along the course, here and there. There was no ‘One, two, three, and away,’ but they began running when they liked, and left off when they liked, so that it was not easy to know when the race was over. However, when they had been running half an hour or so, and were quite dry again, the Dodo suddenly called out ‘The race is over!’ and they all crowded round it, panting, and asking, ‘But who has won?’

This question the Dodo could not answer without a great deal of thought, and it sat for a long time with one finger pressed upon its forehead (the position in which you usually see Shakespeare, in the pictures of him), while the rest waited in silence. At last the Dodo said, ‘everybody has won, and all must have prizes.’

The meeting came to order. Many strode forth to bear witness to the powers of their own speech. Knowing that a decision had already been reached attendees were freed of the usual restraints of topicality, accuracy, or advocacy.

Reverend Herbert Daughtry urged for the MTA’s approval of the Forest City bid for his “domestic tranquility,” as his wife would stand to gain an intergenerational center at the development as part of the Community Benefits Agreement. “Hopefully you’ll participate in this historic effort,” he implored with grandiosity, “and leave your footprint on the sands of time.”

City Councilman David Yassky, relatively quiet as the nearly two-year long debate over Atlantic Yards has raged in the district adjacent to his, contrasted Daughtry’s flourish with tepidness. Summoning excruciatingly mild language, Yassky requested that the MTA “wait until a project of an appropriate scale is approved by the state,” and then seek the best value for the yards at that time.

State Senator Carl Kruger, representing unaffected Brighton Beach, Midwood, Mill Island, and Bergen Beach residents, strongly lauded the Ratner proposal as part of the process by which “neighborhoods are being re-gentrified,” and that the Senator heralded as a “new era.” Excited that the project was “for all of us in Brooklyn that are proud of our heritage and our lineage,” he looks forward to the day that he can say, “the Vanderbilt Yards will no longer be the cesspool that they currently are.”

Shabnam Merchant, in a comment on the MTA’s lack of “courtesy to pretend that this is part of the democratic process,” ceded her remaining time at the podium to silence. Daniel Goldstein addressed Public Advocate Betsy Gotbaum, not in attendance, regarding her willful ignorance over the threat and potential use of eminent domain that have been essential to Forest City’s success. Norman Oder talked about his 173-page report on the New York Times’ coverage of the project.

And it would continue like this. Chairman Kalikow created the room with no walls. The marrow of relevancy sucked dry, the stage was set for an apocalypse of noise tempered only by individual time limits and a sign-in sheet.

“The voting public is particularly cynical about government and about politicians. Now I know why,” City Councilwoman Letitia James lashed out against the board. The councilwoman then proceeded to unfurl a litany of reasons she feels the project is bad for her district and bad for Brooklyn: “This is really for Manhattanites. This is for the rich.” Then to counter the mantra from Forest City and their supporters that Atlantic Yards will provide a great boost to the community—and the African-American community in particular—she added, “This is a project that will only benefit the investors. Ninety-eight percent of the investors on this project are not people of color.”

The offer from Forest City Ratner for the yards was $100 million cash. This is $50 million more than their initial cash offer, yielding the much desired headline that the developer had “doubled” their bid. Of course, as Ratner’s people are quick to assert when asked about a number which undercuts both the scuttled Extell offer of $150 million and the MTA appraised value of $214.5 million: their meat is in rail yard improvements, cash is just a portion of the deal. Forest City throws in a revamped rail facility and platform that the developer has posited are worth $345 million. Thus, by their estimate, FCRC actually far exceed the politically neutralized rival bid and the MTA value.

Forest City didn’t blanche as most of the press, including the New York Times, mischaracterized the new bid as “double,” when it was in fact only increased by 12.6%. A factor of two also has a nicer ring than the reality that FCRC’s package is mostly made up of fuzzily estimated improvements with a mere 22% in hard currency. But these are just numbers. Atlantic Yards has always been about perception.

But why not just offer the whole thing in cash? The answer might lie in the February MOU. In section 8, paragraph (i), it is noted that the already promised state subsidy of $100 million “shall be used to fund costs of site preparation and public infrastructure improvements on and around the Arena Site.” The city’s $100 million can be used for the same.

Paragraph (ii) also notes that FCRC is responsible for all other costs, “Provided however, that the Public Parties will consider making additional contributions for extraordinary infrastructure costs relating to the mixed use development on the Project Site.” This is strikingly similar language to the “Platform and Other Extraordinary Infrastructure” that accounts for $163 million of the developer’s bid, according to a Ratner Fact Sheet released on September 14.

The money might be “real cash,” but a substantial portion will likely come from the taxpayer’s pocket to feed a taxpayer-funded agency, with Forest City simply giving it a good wash along the way.

He also questioned the aspect of the deal that requires Forest City to put only 10% down of their cash offer pending approvals from the state. “Why is the approval of this project subject to entities over which the MTA has no control?” Pally asked, noting that the West Side Stadium process left the MTA without anything to show for the Hudson Yards due to a similar deal structure.

It was during these comments that Kalikow leapt into the abyss by asserting that the $214 million estimated value of the property, appraised by Daniel P. Lane and Associates and paid for by the MTA, “is some guy’s idea of what it is worth.”

It wouldn’t matter. The rich help themselves in Mike Bloomberg’s New York. The idea that logic and proportion might apply to the MTA’s decision, or any other along Ratner’s triumphal march towards his cement and glass crown, is evidently more absurd than the contortions the politicians and sycophants have made to justify their actions.

“Sometime in the summer of next year,” is when Jim Stuckey hopes to erase Prospect Heights in favor of Ratner’s Wonderland—“maybe earlier.” In their actions though, the politicians and the developer continually demonstrate that by their understanding the neighborhood is an empty slate, and always has been.

‘I never heard of ‘Uglification,’’ Alice ventured to say. ‘What is it?’

The Gryphon lifted up both its paws in surprise. ‘What! Never heard of uglifying!’ it exclaimed. ‘You know what to beautify is, I suppose?’

‘Well, then,’ the Gryphon went on, ‘if you don’t know what to uglify is, you are a simpleton.’

This about sums it up.

Roots and Continuities of the Crisis: ADAM TOOZE with Pavlos Roufos

Adam Tooze’s book, Crashed: How a Decade of Financial Crisis Changed the World has been one of the most-admired books on economics in recent years.

The American Crisis: A Trans-Atlantic View

Ultimately, the disquiet of the European ruling classes clarifies what they understand to be the essence of that “soul,” whose contours seem at first sight to be rather vague: democratic consensus. For the implosion of this consensus opens up on conflicts and clashes escaping consensual resolution and makes even the pursuit of the reproduction of a modern capitalist society seem difficult.