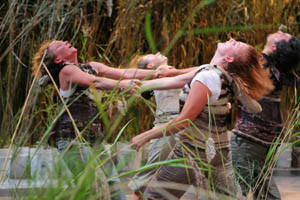 We started out in the elevator, and scooted up to the third floor. Upon landing, we being the participants of the Jennifer Monson/Bird Brain pre-show audience migration, were directed into one of DTW’s two brilliantly sunlit studios and out onto the back terrace. As the organic sounds of the rooftop cityscape floated into our ears, five very young dancers ran across the space. They played with the stage they were given – sliding on the glass skylight beneath their feet, placing their bodies against a brick wall, and waving and smiling at audience members through a large window. An older dancer in the far corner of the terrace floated from one balancing position to another, wavering slightly as she moved one particle of her body at a time. We then left this scene and traveled down three flights of stairs to the sidewalk. As more people gathered alongside uncertainty as to where we should next “migrate”, the dancers began the actual performance, Flight of Mind. We walked across 19th street to the center of the block where one pair of dancers climbed a tree, and the other pair moved cautiously on the sidewalk for some contact improvisation. They moved along the concrete and out into the pavement, stopping traffic and exciting passersby. Like bubbly preschoolers trying to form a single line, we followed the dancers through DTW’s front lobby and into the theater from the backstage entrance. A jungle of soaring phragmites (a common reed) planted in white buckets lines our path onto the stage and the aisles up to our seats. Three of the 19th street dancers, including Monson herself, now clad in meshy fur-like brown knit shirts with hoods and mid-calf pants, lay on the stage floor exploring the environment. Rustling leaves divert our attention as the fourth dancer creeps through the reeds to join her companions. Each performer, seemingly in their own prenatal orb, is out of space. They slowly curl their fingers and cradle the air in their arms. Progressing into punchy arm throws and straight leg swings, the dancers remain autonomous beings while still softly sensing their bodies as whole units. White blazers lying on the side become costumes, and the dancers fall onto all fours. Humming the barely audible, unconscious hum of the unaccompanied, they crawl together – leisurely, very leisurely – to stage left and glance up at their seated audience members. Flinging the blazers behind their heads, they soar back to center stage, and move with more force. Solos spawn trios of intentionally inelegant falls, lazy leaps, clumsy slides and aggressive arm and leg whips.

The scene shifts as the dancers move the reed-filled buckets to different points in space. A new natural world emerges, and hence new natural movement. A solo of quirky gestures and eye-shifting self-consciousness initiates a memorable moment of synchronicity. In a calm cluster, the dancers sway like their tall green-leafed set sharers. Their heads and shoulders rock gently from side to side and back to front, occasionally meeting other foreheads in a tender touch. Sudden alacrity breaks out, and the dancers move franticly to partner each other in a surprising and unremitting series of lifts. Vehemently grabbing each other by the elbow, they stand face to face and push and pull at their partner’s arms – moving, moving, moving – until the inevitable release forces them to the outskirts of the stage. Standing shoulder to shoulder and clutching a bucket in each hand, the dancers swing their new additional weights in unison, creating the illusion of heavy, yet graceful wings. A defiant solo by Monson disrupts this peaceful sight. She furiously stamps her feet, shakes the reeds and liberates high pitched coos along with each frenzied movement. Large plywood panels, Styrofoam, newspaper, the renowned “four little swans” quartet from Swan Lake – fit with Tchaikovsky’s music and bubble wrap tutus – and a hard rock song all help to sustain the hectic ebb and calming flow of the piece. Ending in a serene diagonal, smoothly rocking to the ambient sounds of David Kean’s musical accompaniment, the migration is complete. A place of comfort and stillness has been reached, and the lights dim to black.

Constantly shifting emotions and movement dynamics, Monson’s Flight of Mind reminds us of the mountainous act of migration, whether it be the voyage of birds, learning a dance from start to finish, or trekking the daily route to work. Having studied the migratory tracks of grey whales, ospreys, ducks and geese for over five years, Monson has condensed the initial exploration, then repetition, and final memory that every animal undergoes to learn its migratory pattern into one dance composition. But the dance work does more than just highlight migratory patterns, it emphasizes and brings to light the process of learning itself. The final ingredient in a long learning experiment that has taken Monson and her dancers from Venezuela to the Arctic, Europe, Uruguay, central Canada and the Gulf of Mexico, Flight of Mind invokes our universal draw to nature, our space within that beautifully instinctual world, and the realization that we are all animals with curious kinetics and rhythms whose actions can swing from heated severity to solemn tranquility.

Jessica Weiss is a dancer and writer based in Brooklyn.

Jessica Weiss is a dancer and writer based in New York.

Camryn Bruno is a 21-year-old spoken word poet, author and Curator at the Bowery Poetry Club. She has performed at the Brooklyn Library, The Apollo, The UN, The Public Theater, The Intrepid, The Apple Store and many more. Her poems explore women’s issues, social justice and community building and strives to help with Black women independence everywhere.

In John Dilg’s paintings, dusk and dawn are suffused with green, and the color seems as inevitable as the setting and rising of the sun. His is an old green, like celadon or lichen, that makes the hues of spring shoots seem rather showy.