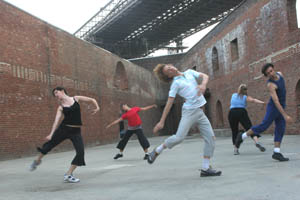 The young daughter of an audience member sitting to my right kept warning her mother, “The dancers are going to get dirty,” as they brushed against the walls of the Tobacco Warehouse in Dumbo. I wish they had gotten a bit dirtier. While the chosen site offered numerous creative possibilities, the movement fell short.

The first installment of Dancing in the Streets’ new site-specific, public performance series, Breaking Ground: A Dance Charrette proved its artistic director, Joanna Haigood, knows how to pick a space. The open-air, triangular brick section of the Warehouse provides one of the most compelling public spaces on the Brooklyn waterfront. Saddled with a packet of information about the architecture and history of the space, choreographers Tere O’Connor, Larry Keigwin, Ann Carlson, Eiko & Koma and Jawole Willa Jo Zollar arrived last Monday to begin their aptly termed exploratory charrette. Each was asked to create a work in an accelerated process for a rain-or-shine performance the coming Saturday. Luckily, the rain held off and determined audience members checked web sites and media outlets to discover the previously concealed location of the performance.

One of the most stunning moments of the composite one-hour program occurred at the start, when Haigood walked the length of the foreshortened space, her body getting smaller in relation to the narrowing triangle. She disappeared through an upstage arch, climbing into the street. Shortly after, O’Connor dancer Heather Olson ran repeatedly in and out of the site, joggling her limbs and head in a manner reminiscent of the many seagulls that run along the Dumbo shoreline. O’Connor’s attention to detail appeared in the stark contrast of his curved movements against the insistent angles of the bricks. A choreographer used to indulging in rehearsal time, it was apparent his eye flitted from concept to concept. Still, his exploration of body surface versus the cold, solid feel of the brick, replaying history with certain dancers added or absent in repeated moments, and the use of various entrances and exits provided one of the strongest and most enjoyable pieces on the program.

Blending into the background with her auburn hair, cement-like bikini tan lines and painted brick sheet, Ann Carlson chose to interact with the wall as an intimate friend instead of an inanimate object. Leaning against the bricks just to the left of the audience, Carlson performed little movement besides a gesturing right arm, the tilt of her head, and various expressions on her face. While I applaud her costume choice, the intimacy of piece neglected to emulate the specific site.

A loud cell phone interrupted my anticipation for Keigwin’s work. A young girl, dressed in a black tube dress, spoke obnoxiously into her wireless as she climbed over seated audience members towards the aisle. While trying to quell my anger, I realized young cell phone aficionados were rising from all areas of the audience and making their way into the performance site. Keigwin’s fabulous obsession with pop-culture was forefront once again. Pop songs abounding, dancers running along the walls propped up by other performers, and young business types dressed for Wall Street produced a sight reminiscent of downtown. But it neglected the intricacies of the space.

Eiko & Koma offered the site the respect it deserved by walking, Butoh-style, up the two sides of the space. Their sparse movement allowed my senses to notice the repeated pounding of the grate on the Brooklyn Bridge, the first fall leaves waffling through the space, and the depth of the triangular space. The slow moving 20-foot Cambodian woman painting detracted from the visual simplicity of their interpretation, but Walk still captivated.

Although the inaugural performance of Haigood’s brainchild Breaking Ground did not take advantage of the site provided, I will definitely keep my eye out for the next space of choice. The audience of dance lovers left Dumbo satisfied with their free outdoor experience and the chance to see the site before the construction of the Brooklyn Bridge Park begins. Perhaps they could even come back—at a construction site you can’t help but get dirty.

Louise Bourgeois, Freud’s Daughter, currently on view at the Jewish Museum, presents a wealth of new material that makes us look at her art from an unexpectedly different angle. This new perspective is made possible by a posthumous discovery of a large cache later known as her “psychoanalytic writings.”