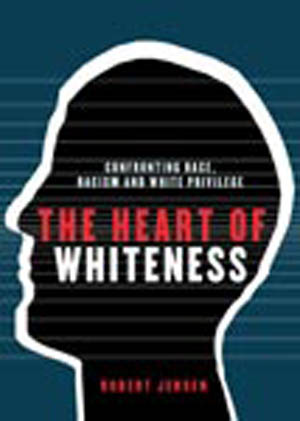 When media ethics professor Robert Jensen was growing up in North Dakota, he had no idea that his insular world was built on a foundation of racial subjugation. To his credit, this self-styled “white-bred, white bread, white boy” has spent decades deconstructing skin privilege. Along the way he has crafted a roadmap to encourage white Americans to assess, and decry, their stake in maintaining a color hierarchy that almost invariably puts them on top.

While the volume is slight, it succinctly posits the ways non-white people—he intentionally uses this phrase over the more pc “people of color”—are discriminated against. For those not in the know, he cites a 2004 study conducted by United for a Fair Economy which provides stark evidence of inequality. Among their findings: the typical African American family has 58 % as much income as a white family; black unemployment is more than twice that of whites; and black newborns are almost two-and-a-half times more likely to die before their first birthday than white newborns.

These conclusions are similar to those documented by Bill Clinton’s Council of Economic Advisors. Their study, completed in 1998, found that whites were more apt to attend schools with computers; graduate from a four-year college or university; retain employment regardless of economic downturns; have health insurance and access to care; and live in less-deteriorated housing than their non-white neighbors.

As horrifying as these facts are, Jensen does more than catalog racial disparities: He turns his lens inward to probe exactly how white supremacy undergirds daily life in the United States. That is, he simultaneously questions his own attitudes, addressing the ways ingrained assumptions sustain racism, and zooms in on the political structures and ideologies that reinforce prejudicial belief systems.

“Accounts of U.S. history tend to treat racism as a stain on an otherwise healthy—some would say divinely-inspired—society…The treatment of non-white people was an aberration that would come to be fixed in time, as white people understood their non-white brothers and sisters to be deserving of freedom,” he writes. Jensen goes on to refute these “self-serving stories of nobility.” The ways Native-American communities were decimated, going from 12-14 million people north of the Rio Grande in the 15th century to 237,000 by the 1900 census, was, he writes, predicated on the idea that indigenous people were wild beasts, less than human. African slavery was similarly propped up by rhetoric alleging that Africans were intellectually and morally inferior. More recently, notions of cultural superiority have buttressed U.S. policy in Vietnam and Central America and are presently at play in Iraq. And of course, Hurricane Katrina made clear the disparity facing poor—and largely non-white—communities vis-à-vis their middle and upper-class neighbors. Does anyone doubt that FEMA would have scurried a bit faster had the devastation hit San Diego or Key West?

But what of it? Since few of us have any say over public policy, is there anything white people can do to confront, and ultimately eviscerate, racism? First, Jensen advocates getting past feelings of guilt since guilt can be paralyzing. Of course, in instances in which a personal affront has been levied, the offender needs to acknowledge it and apologize. But in addition to individual acts of contrition, Jensen believes that white people have to admit that much of their social and political capitol is unearned. “In the racial arena, we are the problem,” Jensen continues. “We should not affirm ourselves. We should negate our whiteness. Strip ourselves of the illusion that we are special because we are white.”

While the book could have used another chapter on the ways different racial groups are pitted against one another, and on the ways class, gender and sexuality are woven into the racial tapestry, Jensen’s honesty is provocative and ultimately empowering. What’s more, he names white supremacy for what it is—the collision of politics and pathology.

Jensen envisions a world in which fairness and equity take center-stage. But rather than wallowing in utopian fantasies, he urges whites to grapple with the subtle and overt ways color is used to suppress and dominate. Although some will undoubtedly find his assertions unsettling, others will laud him for refusing to deny the history or impact of American racism. Jensen’s spotlight on the gaps separating the American promise of liberty and justice from the reality is accessible, powerful and moving. In short, it is a terrific piece of anti-racist writing.

Alan Gilbert profiles the Holt/Smithson Foundation, tracing the histories of its namesake artists and outlining the trajectories of its ambitions as an organization.

The Enduring Spark: The Work and Legacy of The Gordon Parks Foundation