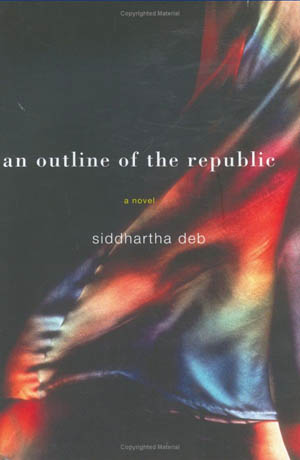 The mainstream media has its cyclopic eye on South Asia, broadcasting images of nerdy brown people stealing office jobs or the destitute and emaciated awaiting alms. Fortunately, writer, critic and journalist Siddhartha Deb razes such naïve notions with his boundless acumen and deft prose, which has appeared in the New Statesman, The Nation and The Guardian. His second novel, An Outline of the Republic [Ecco, 2005] was released earlier this year.

While sitting at a PC on a sultry Delhi day, after traveling through the subcontinent for seven months, I met with the Washington Heights-based Deb in cyberspace. We both would have preferred our usual venue of choice, an East Village dive bar.

Hirsh Sawhney (Rail): I’m curious. Is the title of your new book, An Outline of the Republic, engaging in a dialogue with the “Great Indian Novels” of the ‘80s? Books by Rushdie, Vikram Seth, Shashi Tharoor and others.

Siddhartha Deb: The title “An Outline” is, of course, a challenge to the vogue for the Big Indian Novel and the perhaps even more pernicious trend of the Exotic Indian Novel. The novels of the ‘80s did many things for me as a reader, not least by opening up space in the world of English letters for writing by Indians. But at the same time, when I look back at many of these novels, they seem stylistically unpromising and limited in the world they depict. Their self-imposed bigness somehow misses out on the many small experiences that constitute life in India, including life in the peripheral regions. Perhaps the simplest answer is that I wanted to write a novel that could capture some of what I’ve seen and lived, in my experience of those forgotten highways passing through nameless towns.

Rail: In An Outline, a German editor named Herman assigns your protagonist an article that must convey “a portrait of the mystery and sorrow of India”. Later on, you refer to this editor as an “Asia Junkie”. Is the world hungry for a certain type of perspective on India?

Deb: Well, by the world’s perspective on India, what we mean is the West’s perspective on India. That slippage itself – between the world and the West, and how one stands in for the other – is interesting. It means the gaze of highly industrialized societies, almost all of them with long histories of colonialism, cast upon places like India, seeking to reduce complexities into digestible sound bites. Even an “Asia junkie” like Herman, well-meaning though he might seem, has that tendency. And stories about India tend to fall into two categories: mystery and sorrow, or in a more recent trend, about a globalized, flattened India.

Rail: So, as an Indian journalist reporting on India for Western publications, must one tell a story of either exotica or sorrow?

Deb: That’s the norm, and it’s hard to write for mainstream publications if one doesn’t go along with that world-view. But there are some differences even within the monolithic, multinational-dominated western media (and let me note in passing that the Indian media isn’t much better). I sense more nuance in European (including British) publications when compared to America. And within America itself, there is an alternative media which exhibits a greater diversity of views. As for Indians writing for the West, there are some who manage to do so without compromising. Pankaj Mishra and Arundhati Roy come to mind easily as the best-known of the group, but there are others.

Rail: One of the book’s minor characters is a Calcutta newspaper editor who’s infatuated with untapped opportunities, new subscribers and profit margins. Is he representative of a general transition taking place in Indian media?

Deb: Yes, he is representative of the transition to a crudely market-driven media. But because this is set in the ‘90s, he’s actually a fairly mild version of the MBAs who run the newspapers these days. Today, the transition is more or less complete, and what you get on a daily basis now is a frivolous celebration of consumerism. My favorite example is from last March, when I was in Delhi and found that the Hindustan Times had run a 16-page supplement for Valentine’s Day.

Rail: Your character Robiul is a retired reporter who believes that by being a part of the mainstream media, we might be at risk of adding to the very problems that we are supposed to be scrutinizing.

Deb: If one can remain independent, skeptical, and honest while working through the mainstream media, that could be useful. But whether to stay or flee, whether to manipulate the behemoth or sabotage it completely, these are individual decisions to be made by each person. I think we are functioning at a time of flux, when it’s not very clear what a fully satisfying alternative to the mainstream might be. I left the mainstream Indian media when I was lucky enough to get a graduate fellowship in the United States, but I can’t say I’ve detached myself completely from it, even as an independent writer.

Rail: A character in the novel describes Calcutta as “wonderfully arranged, all straight lines and precise rules and stiff spines”. But “all that becomes a big lie when you move to the edge of the empire and run loose in the jungle with guns and knives”. While this was said during World War II, it seems extremely pertinent to contemporary India and its rural/urban divide.

Deb: Well, more than an urban/rural divide, those lines were about the old conundrum of Imperialism and its other: the sweet old ladies baking buns at home while their sons hand out fifty lashes to the natives. Modernity and barbarism, West and East, Us and Them, a set of oppositions that remains in place in our contemporary world. Of course, I was thinking of the Indian state and its treatment of the marginalized, in Kashmir or the North-East. But I was also thinking of the “war” in Iraq while I was writing the novel. I could elaborate on this, but I think silence might be more eloquent.

Rail: Does the Indian central government have an imperialistic relationship with those on the margins that resembles the relationship between the country’s former colonizers and natives?

Deb: Undoubtedly. After all, the structures were still left in place, especially those of administration, law, army, and market, the racial theories that divided the world into civilized and uncivilized people. But “resembled” is a good word in that the Indian state is not an exact replication of the colonial state. To claim that would be to whitewash the colonial project entirely, which was much more oppressive.

Rail: Amrit begins his journey in a forlorn town in northeast India populated by militants, seedy government officials and an oil refinery. The zone has been “forgotten by the world” and is defined by “insurgency and building boom” with “their odd juxtaposition of violence and money”.

This description reminded me of places I’ve visited in India—like Orissa—where large Indian companies and MNC’s are investing exorbitant quantities of capital, but there are huge amounts of social disharmony and poverty.

Deb: The 1990s northeast that Amrit enters is still relatively MNC-free. It represents a slightly older model for the co-existence of misery and money, where the major player is still the Indian state and a small elite takes advantage of the patronage of the state while the masses seethe with discontent.

The MNCs move in only when the state has been successful in creating an infrastructure, including an ambitious middle class, which is not the case in the northeast and Kashmir. But in places like Orissa, the work of the state is over. For all its faults, the state is susceptible to laws (if only on paper), whereas MNCs are not. The immense poverty you see in places like Orissa is, in fact, one of the resources that draws MNCs in. Huge amounts of capital wouldn’t be invested there if poverty, or cheap labor, didn’t exist. Where would they find workers?

Rail: In a particularly ambient scene, Amar is driving by a World Bank site that conjures up an image of a cemetery. What role do organizations like the World Bank play in parts of India that are “infested” by insurgents?

Deb: The fact is the World Bank usually waits ‘till insurgents have been removed before it moves in, which is why it has a larger footprint in parts of India that aren’t insurgent-prone. It’s not very different, except in scale, from the situation in Iraq, which is still primarily a project of the US state. We will see the full involvement of the World Bank or the IMF or the multinationals in Iraq only when (and if) the area has been pacified.

But organizations like the World Bank have made an impact on more than a single area in India; they have created a world-view, an idea of progress where it is perfectly reasonable to auction off public resources to the MNCs regardless of the social costs.

Rail: Can you elucidate these social costs?

Deb: The collapse of agriculture (which is what sustains a majority of the Indian population, not software technology, whatever Thomas Friedman might think), the flood of displaced peasants to slums in the cities, environmental degradation, sectarian violence, a stripping away of the miniscule labor rights that existed before, large-scale extraction of wealth from the country to western enclaves, and a mindless elite composed of technocrats who think shopping malls, parking lots and gated communities constitute heaven on earth.

Rail: Are you pessimistic about NGOs and their role in development?

Deb: NGOs, at their best, soften the impact of these things. At their worst, they focus on charity rather than justice and often work primarily to salve the conscience of the liberal West rather than for the dispossessed.

But the novel wasn’t intended to comment on these things; it’s not realist at all in that sense. The novel was more about creating a conflict between opposing ideas of modernity.

Rail: Do these ideas provide optimism for the world and its inhabitants?

Deb: But of course. There would be no stories, no novels otherwise. The conflict in An Outline of the Republic—about people who can’t accept their defined roles and who struggle to salvage some sense of integrity from narrow schemes of modernity or statehood—that is cause for optimism.


Currently based in New Delhi, Hirsh Sawhney has recently written for the Financial Times Magazine, Tehelka and Outlook Traveler.

The exhibitions We Do Not Dream Alone, the inaugural Asia Society Triennial, and Dreaming Together at the New-York Historical Society bring together works by over 40 artists selected from the collections of both institutions in a thoughtful and very welcome showcasing of the work of Asian and Asian-diasporic artists still underrepresented in mainstream Euro-American contexts. At this moment, when the movement of people and even artworks is difficult, the mere existence of this two-museum show is a major accomplishment.