A Literary Profile of Lee Stringer 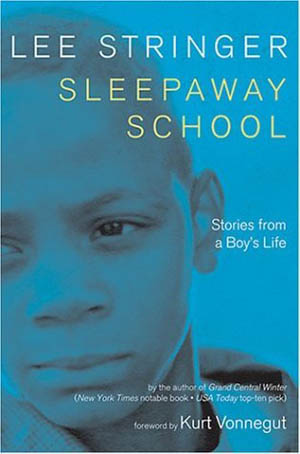 Lee Stringer’s recent memoir, Sleepaway School (Seven Stories, 2004), is a breakthrough in honesty as well as invention. He thoroughly explores a subject he’d formally left alone: his childhood. The book is centered on an adolescent period during which he resided at an upstate boarding school that had begun a charitable program of bringing inner city kids to its privileged student body.

In the early 1990s, Stringer rescued himself from life as a homeless junkie by writing for a New York newspaper called Street News, where he later went on to serve as editor. Kurt Vonnegut has compared Stringer to Jack London, another writer who had followed addiction as far as it would take him before discovering writing out of sheer desperation. In like shaking hands with god (Seven Stories, 1999), a book of dialogue between Stringer and Vonnegut, Stringer claimed that this discovery made him feel more rich, as a homeless person, than the countless people who inhabited the 1980s with material comfort but who were spiritually empty and did not know what to do about it.

Stringer introduced flashes of fictional narrative in his first book, Grand Central Winter (Seven Stories, 1998), which complement the journalistic tone he’d kept from Street News. He’s often more concerned with the greater subject of homelessness (which he refused to term a “problem,” simply a separate, outsider lifestyle) than his own position. There is, however, substantial background on the life that landed him on the street, as well as flashes of personal reflection. When Lee runs into a former white-collar boss of his in Grand Central, he is treated with “equanimity.” The boss reminds him that the marketing company he’d worked at still employs his ideas, and asks him if he ever misses it, if his “brain ever atrophies.” Lee responds that his brain is fine, and is grateful not to be offered a handout. By this point he’s found a certain amount of pride in surviving outside of society, and is caught up with the daily work of redeeming cans and selling newspapers.

The writer’s recent past is not mentioned in Sleepaway School, yet the book speaks to Lee’s individual education. The book opens with Lee on his way home from public school with two friends: “Three fatherless sons walking.” The boys go on to discover a dead fetus in the trash, which leads Stringer to address his upbringing as an unwanted child. He was the second born of two and his father left when he was a baby. His mother was counseled to put him and his older brother up for adoption. She insisted on keeping the older son, though easily surrendered Lee (or Caverly, as he is legally known) to foster care, where he stayed until she could afford to take custody of him. As he grew up, his mother continued to convince Lee he had few prospects, and she attributed this specifically to the fact that they were black. A poignant memory from GCW is repeated in Sleepaway School; Lee remembers the words of his mother: “White folks, they got money.” She makes him believe that his white friends, who happened to have been on welfare as well, had more money than they did. “I never liked what that said about my prospects,” he wrote in GCW. In Sleepaway School, he builds on the theme. His mother would never employ the word no when deciding something for him—she would say only can’t or doesn’t, to prevent him from thinking that there ever was a choice. She’d accuse: “You want to have your cake and eat it, too.” She had “an entire repertoire of such pithy sayings,” such as “money doesn’t grow on trees,” to which an eight-year-old Stringer thought “Money Tree…Wow!” Though he would roll his eyes at these predictable proclamations, he admits that it was, “worse [to hear the words can’t or doesn’t] than hearing the word no.” For Stringer’s mother, and reluctantly for him, they lived in a realm of impossibility.

Stringer has learned to reinvent memories with this book while providing extra insight from the present, while GCW, though insightful with regard to depicting the motives of those around him, was more of a social document. As he said to Vonnegut in lshwg, while explaining how he discovered to write this follow-up to GCW (he took questions asked of him at readings and sought to discover the answers), writing Sleepaway School was a process of learning. He has explicitly invited the reader to feel smarter than the writer; to be one step ahead of him. In this way, to the right reader, Stringer is endearing.

Stringer addresses race by showing how he came to terms with the issue as a child. In a third grade classroom the students have their textbooks open to a passage on slavery. On the page is a Currier and Ives cartoon, depicting a “creature barely recognizable as human,” with the caption “Negro Slave.” He looks up from the textbook and finds a dozen pairs of eyes on him, and begins to understand that he lives in a world apart from these white children. Their world is illustrated by Norman Rockwell, his by Currier and Ives. Soon afterwards he finds himself in one of many schoolyard fights.

These fights and their repercussions form an odyssey for the young Stringer, shaping the central conflict of Sleepaway School: his confrontation with this notion of impossibility. Lee behaves better at boarding school than he had in the public classroom, though is eventually baited into a scuffle. The school’s administration attempts to scare him straight with a brief stay in a mental hospital—all under the auspices of evaluation. When he returns to the school, however, he finds despair rather than freedom. At the hospital they’d given him sedatives and he was, for once, able to forget himself. The susceptibility of a child is rendered beautifully in these scenes, and compounded by a realization that the world won’t help him: “The scariest thing of all…was discovering the sublime satisfaction I got out of life in a bathrobe. How willingly my desire for anything more than that had surrendered to the allure of blissful nothingness.”

Of course the young Stringer learns to constructively battle his sense of hopelessness, which becomes the crux of the coming-of-age story. It happens on the baseball field of the boarding school. After hitting a grounder that should be an easy out, he charges to first base, refusing to give up. His unexpected burst of effort and determination distract the fielders and they execute a series of errors that give him a double. “It was no longer about beating the throw, or outrunning the ball. It was about wanting to declare war on the very idea of impossibility.”

Through the beginning, and most of the first half of the book, sentences are allowed to go long and multi-clause, serving to illuminate the writer’s childhood uncertainty. But once we reach the baseball scene, and from there on, the sentences become super short, in fact are often broken up into phrases or couplets of words. It is here that the reader comes to grasp just how artful Stringer’s prose is: “There’s everything that follows. Like the radio I build. Talk about making something out of nothing. A razor blade. A point from a pencil. A little wire. And an empty toilet paper roll. Is about all it takes.” Later, “I take up art class. Because I like the teacher. Mac Greenfield. Who never wears a tie … A real artist, to my eyes.”

By the early 80s, just before Stringer would face the grief and catastrophe that would lead to a decade of life on the street, he had developed a multifaceted professional career and had become a successful graphic designer. His life as a junkie took him through a 180-degree turn. Stringer had become fully adjusted to life as an outsider, but his work could never be considered “outsider art,” which is often categorized as reflexive rather than reasoned. The writer has come away from his experience in journalism with the ability to lucidly portray reality, and with his latest book he’s made solid artistic choices. The first book was an opportunity to address who he had become. His latest has demonstrated a more whole self-knowledge.

Organized by art writer and curator Paul Laster, An Alternative Canon: Art Dealers Collecting Outsider Art presents nearly 75 artworks collected by some 30 dealers. The range of the works, shown salon-style in Edlin’s space near the New Museum, is remarkable.