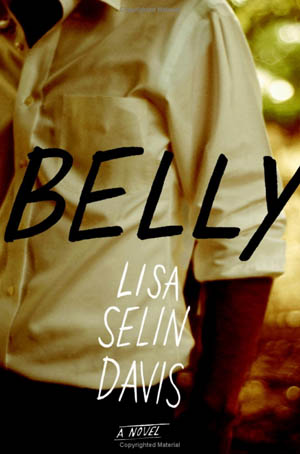 Belly, the debut novel from Lisa Selin Davis, meanders almost as much as its hero. But even where the plot plateaus, as it does in the middle, the prose is strongly compelling. Large portions of the novel are sustained by fresh language and a deeply felt personal voice that vividly evokes the cogs of a troubled psyche.

This novel is about loss and hope and what happens when time has its way with each. After returning from four years in prison, Belly O’Leary sets out to find his former life in his hometown of Saratoga Springs. His approach is to drink, wander, seduce strangers, insult his daughters, express his intolerance, and try—always failingly—to drown out the army of unpleasant thoughts marching through his head. Sentences like “he tried very hard to stop thinking” proliferate throughout the book. “Sometimes,” Davis writes, “when a memory came crashing back—a flash of his hand across Nora’s face, his fist on Myrna’s cheek, the slap of his fingertips staining red vines on Ann’s back—he shook. He shuddered.” His memory assails him to such an extent that it becomes possible to sympathize despite his heinous acts. As Faulkner wrote, there is no such word as “was.” This is especially true for Belly, a man continuously moored to his troubling past.

This is also the wrenching tale of a father unable to overcome his estrangement from his daughters. His relationships with them are tested by his wild behavior. He asserts his fatherhood, then acts like a teenager; they tell him he acts like a teenager, then he asserts his fatherhood. The story tracks this downward cycle, as “the women of his life [sway] before him…concocting some spell, choreographing a tour of his wrongs and misdeeds, his grand mistakes.”

Each of the daughters live a life of which he disapproves. There’s a lesbian, an artist, and a housewife. None of them, he believes, is doing what she’s “supposed to.” This, combined with the reality of having mistreated all his daughters, fuels his anxiety. And his anxiety propels the plot. What he wants is to tell them about how he was brave for them, that he kept his mouth shut in prison in order to protect them, “so that they might finally forgive him,” but he can’t.

Pieces of back-story rise to the surface throughout, allowing the plot to expand from behind even as it moves forward. While this strategy is skillfully handled, the result is a novel that moves like an overloaded pickup truck: it is too heavy in the back to progress with much gusto. The plot trudges onward through a mud of flashbacks, doing its best to elbow past memories and kick aside regrets. Belly wants out of his own head, he says, and sometimes so does the plot.

That said, one of the achievements of this novel is that its shape so brilliantly evokes the very landscape of Belly’s mind. It is precisely this imbalance of past and future that makes possible such a vital and precise psychological portrait. When he encounters his former mistress and her son—who is responsible for his daughter’s death—his memory seizes him. “For a long time he wanted to go into her son’s room [in the hospital],” Davis writes, “and pull the plug on that kid, wanted to rip the clear blue plastic breathing tube from his throat…Loretta’s son swiped him of his hope, and he wanted to kill that boy, and then for a while he wanted to kill Loretta, and once he was so pissed that his third daughter had died and fucked up his fantasy that he wanted to kill her…but she was already dead.”

This is typical of the torment thriving inside Belly’s head. Reading these 273 pages isn’t unlike watching a mouse in a maze: how will Belly ever escape his past? Around every corner there seems to be more problematic history. He is a man that simply “doesn’t know what to do with himself.” Choosing to write a novel about such a man seems a bit like betting on a blind horse. It’s a risky move. Chances are it will not go anywhere or, equally boring, wander aimlessly.

But Davis takes on the challenge with all any writer needs: a narrative voice that grabs you by the earlobe, that engages even as it frightens, demands empathy even as it disgusts. This is not a book about the bad guys out there, but about the bad guys within. Beware all readers for whom the line dividing good from evil is sacred. In the single week depicted here, you will see it blur and recede. Whatever the novel lacks in momentum, it gains twofold in candor. The hero may be a wanderer, but the achievement stands.

Mac Barrett is an MFA student at The New School and a Brooklyn native.

Over the last ten years, Megan Mayhew Bergman has proven to be a damn fine short-story writer. Her stories have appeared in such literary magazines as AGNI, the Kenyon Review, and Ploughshares, and, more recently, the Sewanee Review, Narrative magazine, and even O, The Oprah Magazine, and they’ve been collected in The Best American Short Stories

Kevin Prufer’s The Art of Fiction

As the title of the book suggests, Prufer accomplishes this through an inventive, supple storytelling style that binds memories and hypotheticals to various fictional forms. The bulk of the collection is comprised of poems in which multiple narratives initially run parallel, then gradually angle towards one another and ultimately intersect.