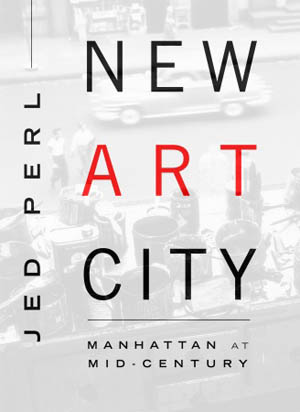 It’s no secret that critic Jed Perl is at odds with today’s art world. His 2000 essay collection, Eyewitness, attacked an “art world in crisis,” and he’s sounded off against Pomo posterboys (and critical darlings) such as John Currin, Damien Hirst, and Matthew Barney. Just last month, Perl spilled 7,400 words in the New Republic—where he has been writing since 1994—on the death of formalism and the “hipper-than-thou bravado” of the chic taste-makers who always find the exhibition’s after-party.

That said, it is refreshing to find in New Art City descriptions of many artists that Perl, well, likes. Granted you have to travel more than half a century to do so, but the result is an exhaustively researched and engaging look at the life of the artist in post-war New York. In addition to charting the rise of Abstract Expressionism, Perl delves into the competing social factors during America’s post-war economic boom.

In Manhattan, Perl unearths the humble beginnings of avant-garde artists that would assume iconic stature a generation later, beginning with Hans Hoffman; an artist and teacher who helped inspire what later evolved into an explosion of art in the city. Early on, Perl sets out to trace the “geography of Bohemian Manhattan,” dropping by such fabled haunts as the Artists’ Club or the Cedar Tavern. Today, you are more likely to find some NYU frat boys at Cedar, but Perl insists that the (typically inebriated) atmosphere back in the day was filled with both philosophical quips and loads of gossip. “To be in New York in the 1950’s was to be in on all the jokes,” writes Perl. “[A]nd the jokes could have an Olympian incandescence.”

Most of the art historical heavyweights show up at Cedar and elsewhere in the text, like Willem de Kooning, Jackson Pollack, and Mark Rothko. In a counterintuitive move, Perl devotes a considerable amount of space to looking at similarities between the representational Fairfield Porter and minimalist Donald Judd. Poor Andy Warhol gets his 15 minutes in New Art City after showing off his soup cans in early 1960’s, but Perl is typically harsh.

The favored artists are lauded for engaging on a romantic quest, while others are derided as two-bit pranksters. However, the real star becomes the city itself—where forces were swirling outside of the gallery’s white walls. Perl highlights the Partisan Review crowd’s high-brow banter, John Cage’s compositions, Merce Cunningham’s moves, Hannah Arendt’s lectures, and the growing influence of art critics Clement Greenberg and Harold Rosenberg. From the top of an International Style skyscraper down to those “little” magazines forever ignored by LexisNexis, the author dives headfirst into the cultural zeitgeist.

During this time, museums play an increasing important role, with the “New York City saga involving the union of turn-of-the-century fortunes and twentieth-century art.” The Guggenheim grabbed headlines when it opened in 1959, and attracted crowds eager to gaze the manic, paint-covered canvases that could even be found in the pages of Life. Around the same time, the MoMA began to tap into the downtown scene, the “bold, hyper-caffeinated, late ‘50s pulse.” There was a surge in public commissions, and the avant-garde artists that had toiled in relative obscurity—except amongst their own cultured lot—were being asked to create murals, mosaics, and immense public sculptures outside of commercial buildings. And works by Jackson Pollack and Joan Miró now adorned the walls at the Four Seasons restaurant.

Following the abstract art narrative, Perl looks critically at Pop Art’s arrival and the “beginning of what looked to be the most glamorous, publicity-crazy, and hell-raising decade in the entire history of American art.” For the author, the grand, romantic quest of the Abstract Expressionists was being traded for a crazed pursuit of the next big thing, like Jasper Johns, who Perl believes “merely [played] to the audience’s confusions, turning banalities into elegant but empty enigmas.”

Weighing in at just over 650 pages, New Art City might best serve the role of a textbook; indeed, Perl is teaching a course on the very subject this semester at The New School. However, if used for teaching purposes, there is obviously another story to be told regarding Pop Art—or a more sympathetic one at least. Students aside, the book will resonate with the reader who has grown tired of the skyrocketing market and its affect on younger artists, celebrity-filled gallery openings, and those who constantly hearken back to Duchamp for inspiration. Because for Perl: dada is still a four-letter word.

Michael Calderone is a writer based in Brooklyn.

The Lemke House, built between 1932 – 33 for Karl and Martha Lemke, who had no children, on a pair of lots in the Berlin suburb of Hohenschönhausen (now Berlin-Lichtenberg), is modest. It’s the last house that Ludwig Mies van der Rohe built in Germany, before closing the Bauhaus, owing to Hitler, and moving to Chicago. Karl Lemke, who ran a graphic arts business that catered to the art world, was a friend of the architect. That this work entailed a great deal of thought on Mies’s part is attested to by a huge quantity of preliminary drawings, starting from much more ambitious ideas.3 The economy was taking its toll; yet something excellent was envisioned. Two significant features of the project do not seem acknowledged, however: the role of a woman designer, and the fact that the house, small as it is, is an extraordinary example of the influence on Mies of his most admired living philosopher, Romano Guardini.