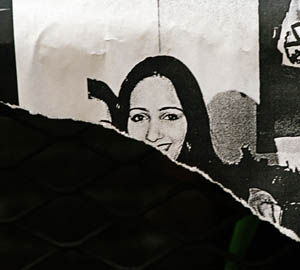 In the days after September 11, 2001, acts of daily life took on enormous significance. We asked ourselves how much news was too much? How could we return to the triviality of our usual worries? And, most urgently, what could we do? These questions are at the root of a small, stirring exhibition of ten artists at apexart, titled simply The Art of 9/11 and curated by the philosopher Arthur Danto. For years, Danto has served as art critic for The Nation, writing challenging, lucid articles about art for a very broad audience. Perhaps it is only to be expected, then, that this exhibition deals with such a universal question, one we all have our own answers to: what can one do after a catastrophe?

Danto posed this question to artists, people whose labor was not “necessary” for the immediate response to 9/11. The question of how to make art following 9/11 was something many artists asked themselves, and this exhibition presents a range of responses that are deeply relatable. You can obsess. You can try to escape. You can resort to irony or humor. Or you can simply document, taking solace in the distanced, mechanical click of a camera.

Jeffrey Lohn’s Untitled series and Lucio Pozzi’s Nothing #5 September 11, 2001 each offer photographic variations on the aftermath. Lohn focused on the posters of the missing, returning to re-photograph them as they began to curl and fade. This series is highly affecting and poetic; you come face to face with the victims, seeing how their image deteriorates over time, as though forgotten. Pozzi photographed the huge, black billowing smoke passing across a strip of sky. Xeroxed onto yellow paper, the minimal shifting of the dark clouds assumes a calming formality, seeming for a moment as if it could be separated from its context.

Lending a sense of intimacy to the exhibit, all of the works are paired with artists’ statements about making art in the aftermath of the events of 9/11. At times the works stand alone, but often they are conceptually dependent on the statements. For example, Pozzi recalled how, in a state of despair, he copied one of his watercolors over and over again. The Big Field Revisited yet again, a serene, floral landscape, is as far away from Ground Zero as one can get. Similarly, Audrey Flack chose to paint boats to escape the television news. The time-intensive nature of painting satisfies a desire to become immersed in something, anything, else. Flack’s cheerful watercolors are skillful, but not particularly exciting. It is when you read that it was the only thing that kept her sane at the time, and the strong, childlike colors were in response to the painfully perfect weather, that the paintings reverberate with the intensity of those days.

Leslie King-Hammond’s exuberant shrine of household objects, seashells, candles, crystals, and religious icons mimics the hundreds of spontaneous memorials that sprang up almost instantaneously on the streets of New York. A proudly vernacular piece, King-Hammond reminds us that it was those immediate responses, and resulting communal spirit, that was the first art of 9/11.

Although the concept of this exhibition is compelling, the artworks are uneven. Cindy Sherman’s large, garish photograph of a deadpan clown is included for its heavy-handed tragicomic allusion. The “we’re crying inside” irony instigates a cringe—and not because it’s supposed to. Mary Miss’s proposal for a temporary installation at Ground Zero includes a sky-blue flexible fence, seating, and blue lights to form a “wreath” around the site. Her desire to make the site less like “a crime scene,” by painting figure eights on sidewalks and planting flowers, is well intentioned, but—it is a crime scene, and dressing it up isn’t going to alter that. The thorny question of how not to aestheticize tragedy and violence becomes central here, and like so many other designs for Ground Zero, avoiding mawkish leanings is a difficult feat.

Danto has chosen an engaging range of works, successfully surveying the variety of responses to the question of what to do, and avoiding what we have come to think of (and avoid?) as art “about” 9/11, namely, realistic paintings of heroic firefighters, the towers on fire, and stars and stripes forever. In his accompanying essay, Danto refers to a comment by Wittgenstein, who, hearing that following Robert Schumann’s death, his anguished brother ripped up his music and distributed the scraps to his students, deemed the act “understandable as an act of piety.” This word, “understandable,” guided Danto. It opens an entirely different space of critical distinction—the question is not: does the artwork succeed, is it great, and why? But rather, can we understand this gesture of grief? And to this end, yes, we can.