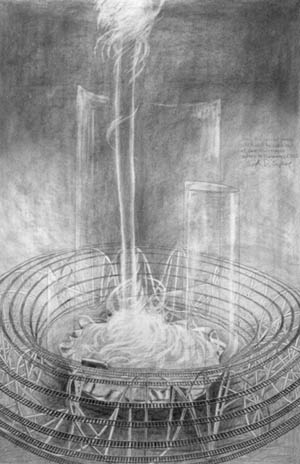 Americans have always been held in awe by the forces of the natural world: from the panoramas of the Hudson River school, to the vast vistas of Moran or Bierstadt, to the Earth works of Robert Smithson and Michael Heizer, we idealize nature. Indeed we’ve sold an image to ourselves and the world of Americans (both North and South) as innocents in a struggle with nature. Now artists like Sarah Sze are dealing with the “nature” of technology, the art of the artificial. Ryan Wolfe’s “Sketches of a Field of Grass” covers the walls in the front gallery at Dam Stuhltrager with dozens of parallel, wired flat panels about two-by-four inches. The flattened boxes present a front cover filled with sand; a single filament of green plastic about fifteen inches long, and looking like a blade of grass, extends from the top. The twirling connection lines between the units and their shadows create a drawing on the walls that could allude to a field or dune. Upon entering the gallery the “blades of grass” begin to flutter and quiver, reacting to the presence and movements of the viewer. Acting on received environmental impulses, the blades rise and fall like grass in a sea breeze, or in this case, an electronic wind. An all-over configuration of responders fills the two main walls, and a line of single units runs back towards the rear gallery on a side wall. Spending a few moments watching the silent rustling of the grass provided a welcome relief from the din of grinding video and sound installations of a gallery that I’d just visited, and even on this late summer weekend, the flittering of the grass seemed to simulate a crisp draft that offered at least an impression of coolness.

The work of Mark Esper is well known within a certain technology and gizmo-inclined network of the art world. The coincidental timeliness of Hurricane Katrina, and the allegorical resonance of “Second Orrey,” should impress even those aficionados who believe in “low tech” or “no tech” art. In the center of the darkened gallery a miniature golden locomotive circles endlessly on a framework of spiral tracks fashioned from metal struts welded in the form of a double helix. As the train circles, overhead lights dim, and a spotlight focuses on a shallow reservoir of water in the center of the tracks. Hot plates under the pool are activated and the water begins to heat up. Clear plastic sheets channel the airflow. Slowly, a ghostly whiff of vapor forms, and begins to rotate. Soon a tiny tornado is spinning and wafting towards the ceiling. The train rotates in unison with the tornado and as it passes various sensors in the track it again turns off the heat, brings up the lights and begins another cycle on its endless circuit. The approximate time elapsed for the full run is about five minutes. As one of the aforementioned art Luddites, I was impressed with the elegant application of simple scientific principles. Esper’s concept, design and craftsmanship are admirable, but the potential imaginative responses to this work are by far its most satisfying and ultimately valuable aspect. With what appears to be a trend in techno art, computer art and “New Media” recently glutting the scene, Esper has achieved a refreshing balance that doesn’t overwhelm the viewer with exaggeratedly sophisticated gadgets or notions too complex for mere mortals to grasp. Like Mr. Wizard, he utilizes every day objects and uses them to illustrate simple natural phenomena in powerfully dramatic ways. Nature for all its destructive force is after all elegant, and as our world of the vulgarly artificial and the natural becomes ever more intermingled, those aspiring to classic elegance will do well to emulate it.