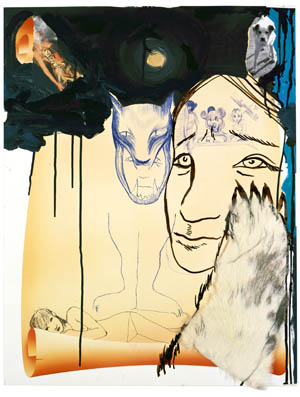 It’s helpful to look at the work in Rita Ackermann’s mini-retrospective of collages with the evolution of her paintings in mind. First there were simple, graphic paintings of urbane girls who took drugs, talked on phones and posed like women from Gauguin paintings. Then there were some neo-neo-expressionist paintings, with big simplified faces and animal imagery and very casual paint application. There was a side-trip into photorealism. Recently there have been more conventional figure paintings in which Ackermann’s cast of pretty girls and art historical quotations wander in strange and moody landscapes. This show charts the transitions in Ackermann’s work with few stylistic anachronisms.

Generally the earliest collages in the show are the most anti-formal, sometimes consisting of just several lines of clipped newspaper text and a few indifferent smears of paint. The more recent works are slower and more labored, with more hand-drawn or painted elements embedded in the mess of tabloid fragments and craft materials. The most anarchic-seeming works exhibit a high degree of control and nuance. A series of works named after Alfred Jarry’s absurdist character King Ubu look like slapped-together accretions of magazine clippings, until one notices the absolutely precise traced ball-point text that floats through them, and all the signifiers of chaos and haste are revealed to be formal and considered.

This isn’t a complaint; the challenge of nth generation photo-collagists like Ackermann is how to shrug off the weight of precedent in the medium, and a little self-consciousness goes a long way. Collage is arguably the first pop form in the visual arts, and way before Richard Hamilton’s genre-founding Just What Is It that Makes Today’s Homes So Different, So Appealing?, theorists of modernism were intrigued by the fact that cutting an image out of a book and pasting it onto a page with other pictures had an almost magical way of subverting meanings. From the Dadaists to the Situationists to Henry Darger the medium has been put to many different uses, but the common denominator has always been collage’s literalness, the way that without really trying it’s always about the present.

Ackermann’s collages appear to have been made while other things were happening, and made out of the things that happened to be around. They have an organic relationship to Ackermann’s studio practice: they look like a combination of the studies for a painting and the source material for the studies. One imagines that a lot of them started as piles of stuff on a studio table that changed as the needs of a painting in progress changed. They’re diaristic, showing what kind of printed matter an artist in a particular time and place would have lying around, and what one particular artist felt about it. Collage is the official art medium of the magazine reader, and it suits Ackermann’s practice, which has a lot to do with what one subscribes to in a culture.

There are lots of amazing visual moments in the show, and clearly Ackermann has a razor-sharp eye for extracting living details from dead sources. But in that, one feels a nagging sense of the limitations of collage. I was struck by the thought that it’s a medium so thoroughly absorbed into culture that middle school students make, without being aware of it, Hannah Höchs on the covers of their three-ring binders, and the disorienting force of that process has been replaced with familiarity. Lukács said, witheringly, of photomontage: “a puddle can never be more than dirty water, even though it may contain rainbow tints,” meaning that a collage is only a shuffling of materials without the capacity to articulate the whole system in which those materials function. This problem is somewhat remedied in Ackermann’s paintings, which develop the language of bewildering, disposable pop culture into more satisfying articulations. Maybe it’s best to approach the works in the show like Ackermann might have approached her source material: alert and critical, appreciating beautiful moments, but without expecting to get the whole picture.

The collages by Deborah Turbeville currently on view at Deborah Bell draw mainly from the photographer’s work in fashion. Turbeville’s images are shrouded in a gothic atmosphere of deep shadows and Romantic decay, and her models typically convey alienation or psychological dissociation—not precisely the glamour we expect of luxury advertising.

Abby Leigh’s visible work seduces with subtle, unassuming color and flashes of silvery metal. We look at these paintings, and it is as if we were peering into a microscope at a specimen displayed on a slide.