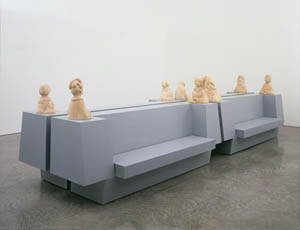 In a stunning New York debut, featuring several wooden sculptures and a series of watercolors, German artist Paloma Varga Weisz shines, raising the suspicion that she might be one of the most promising young talents around.

Born in 1966 in Neustadt an der Weinstrasse, Germany, Varga Weisz studied at the Kunstakademie in Düsseldorf and was formally trained as a wood carver, an education that leaves her impressively at ease with her chosen medium. Deeply rooted in the arts and crafts of the Middle Ages, Varga Weisz’s limewood sculptures embrace the overtly spiritual undertones inherent in their traditional style and subject matter. Entitled Chor (Choir), which since the eighth century has been the architectural term for the highly decorated area in Christian churches at the end of the nave, just before the chancel, the exhibition does not avoid naming its main source of inspiration. In fact, when traveling the landscapes of soft and beautified contours that map the features of Varga Weisz’s figures, one is reminded of the monochrome work by master sculptor Tilman Riemenschneider (circa 1460–1531), Gothic friezes at the Rheims Cathedral, or the physical perfection embraced by Flemish painters, such as Rogier van der Weyden (1399–1464).

However, the strong sense of untouchable purity that determines Varga Weisz’s work is not exclusively indebted to a Western heritage, but also draws from a Far Eastern vocabulary reflected in Buddhist and Hindu sculpture: physical flawlessness is almost always employed to represent spiritual importance. Despite their connection to the past, the fantastical community defining Varga Weisz’s playful imagination is as colorful as contemporary life. Mythic creatures, part-man part-dog, children with exotic animal skins, medieval noble women, and monks, are brought together within the gallery walls, which they in turn transform into a post-modern version of a magical forest, worthy of a Brothers Grimm tale. Extracted from any narrative, each figure hides in its anonymity, and like relics, they become mysterious reflections of the unknown.

In the main gallery space, a disjointed female figure is suspended from the ceiling, hanging upside down. Draped in a gray blanket, which falls into lavish theatrical folds, only her face, arms and feet remain uncovered. Her eyes are closed, arms outstretched. The ambiguity of the posture, which could be interpreted as peaceful trance or rigor mortis, is quite unsettling. What are we witnessing—a moment of bliss or the aftermath of a crime? The answers withheld, the work’s mysterious aura deepens, pointing to the close affiliation between horror and grace, tragedy and bliss.

The back gallery reveals an installation made of four stylized church benches and eight busts, serving as framing posts. Perpendicular to the sitter, each figure opens itself to close inspection and intimate dialogue. They come in unusual pairs, “Hundeportrait and Doppelkopffrau” (“Dog Portrait and Double-headed Woman”) or “Pelzmützenmann und Mönch” (“Fur Hat Man and Monk”), uniting what under normal circumstances would seem worlds apart. The overall color scheme, dominated by the blue of the furniture and the sand color of the limewood, provides the installation with a tranquility that appears to be both soothing and austere. The message might be that though peace can be found here, any additional presence would disturb the well-balanced relationships between the elements. In other words, to stay would mean to intrude.

Grouped together in a small room, Varga Weisz’s watercolors surprise with their independent and equally accomplished handling of the figure. Whereas each step towards the completion of the sculptures requires absolute discipline, these works on paper reveal an immediacy and freedom of the artist’s hand that is astonishing. With a few brushstrokes, Varga Weisz evokes the most prominent facial features, capturing eyes and expressive mouths within the void of the paper. Almost ghostlike in their delicate appearance, the portraits seem to foreshadow the manifold stories still untold by Paloma Varga Weisz.

Alexis Rockman’s medium for the 22 marine and submarine works currently on view at Sperone Westwater—watercolor and acrylic on paper—is paradoxical: watercolors are notoriously susceptible to moisture while acrylic paint, though water soluble, is waterproof when dry. So, the paintings are ephemeral and permanent at the same time, like nature itself.