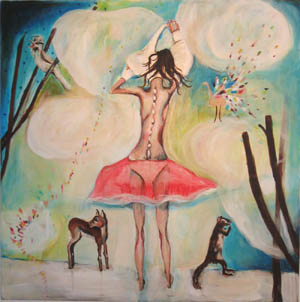 Maureen Cavanaugh’s Lovey Loverson is a selection of paintings and small works on paper that initially seems to reinforce the common clichés of much “Post Feminist” or more recent “Chick Art.” These works, however, present a tightly knotted bundle of supposed contradictions: a cuteness that verges into the grotesque, an erotic voluptuousness that transforms into a Gothic severity, and a naïveté hiding a knowing cynicism that isn’t afraid to play the kitsch card when it suits her purposes. Many of the subjects and poses of these paintings are a subversive codex of iconic female images: the bather, the dancer, the lounger, the seductress. Popular fellow painters tilling similar areas in the fields of “Post Feminism” like John Currin, Lisa Yuskavage, and Karen Kilimnik seem to relish a pimp-like condescending approach to the viewer. Yet for the breadth of historical and contemporary references in these works, there remains in Cavanaugh’s work a stylistic sense that is at the same time more authentically expressionistic and, what Irving Sandler has quantified as, “pathetically” funky.

In “Taking Off the Pink 2” (2005), an anorexic female figure, back to the viewer, pulls a white blouse off over her head. Her transparent pink skirt arches out stiffly like a tutu, revealing her panties beneath. But for the accentuated contours of the attenuated body and the white daubes that highlights the spine, like an anatomy chart, this would approach classic cheesecake. A group of “cuddly” critters including a fawn, a squirrel, and an abstract peacock watch from the front in a swirl of pastel clouds. A bucolic semi-nude gloss on the Rococo appeal of Watteau and Fragonard, or cuteness gone creepy, akin to big eyed Keane Kids on crank?

In smaller works Cavanaugh is less concerned with the overall composition and finish, instead letting the rawness of pencil drawing on bare primed canvas contrast with more heavily worked details. In both “Ski Mask” (2005) and “Skull Cap” (2004) faces of friends appear behind masks, a frequently used device that here is brought to a spooky crescendo through aggressive brushwork and an odd distortion of intent. Though no ponies or puppy dogs are depicted, Cavanaugh does have her animal favorites inhabiting the paintings. Odd-looking birds that could be kingfishers or blue jays appear often, a kitty cat lounges on a chair back as it watches over “Kim” (2005), and a pair of “Cheetahs” (2005) rests under a sketched-in branch full of cardinals.

Life is becoming ever more complex. The demands that society and the media place on young women through their conflicting imperatives are unrealistic. Perhaps it’s this that Cavanaugh is confronting in her recent quirky paintings: a desire to be simultaneously a sexy vamp and a cuddly kid, an unsophisticated outsider and a knowing art world initiate. Beneath the rainbows and flowers, the babes in thongs and the swirling puffs of cotton candy, be careful. There might be razor blades hidden inside this pretty package from the “Valley of the Dolls.”