If You See Something 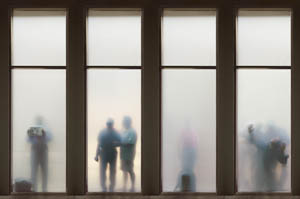 Talk about intelligent design! They have it all wrong. Krzystof Wodiczko is what I call an intelligent designer. I also call him a poet, consummate visual artist, man of conscience, inventor, and extender of the great tradition of the Gesamtkunstwerk, the total work of art, that calls upon all the senses. He is in top form in his current exhibition, If You See Something, addressing a number of contemporary issues by means of metaphor and spectacle. As he says, “By the energy of spectacle you are being brought closer to the subject.”

In this chapter in his ongoing social commentary, Wodiczko uses as his primary medium the art of projection—a technique he started developing more than twenty years ago when he often projected huge symbolic images on public buildings and monuments. This time, however, the viewer is inside looking out. What he sees, you might say, is seen through a glass lightly. Filmy white glass panels, like doors often found in Chelsea galleries, provide the windows to his filtered realities, projected discreetly and accompanied by the voices of his protagonists as they discuss their problems, many of which are related to First Amendment issues, or immigration issues, or marital issues.

In another somber room, Wodiczko has only symbolic flickering candles, and a discharged soldier on the speaker, reminding us of the unacceptable rhetoric accompanying the Iraqi debacle. And the painful moral dilemmas all such young warriors face. This, too, metaphorically speaking, is a projection. Aristotle, in his discussion of rhetoric, said that, “By far the most important thing to master is metaphor. This is the one thing that cannot be learned from anyone else, and is the mark of a great natural ability.” We might add to metaphor, in which one thing stands for something else, another rhetorical term, metonymy, in which the part stands for the whole. Wodiczko has used these devices consistently. For example, he very often uses hands and body language in his outdoor projections. And, in his last major gallery show in New York, Hiroshima, he showed a film he made there, finding a solution to the problem a visual artist has when dealing with such a monstrous holocaust. His solution: he posed surviving victims of the bomb on the bank of the river (into which so many had jumped thinking they would escape the fire, only to be boiled to death); had them discuss their experiences on the soundtrack, but showed only their hands as they talked. It is a devastating rhetorical device, brilliant in both conception and execution.

In his present exhibition, the art of projection is still further refined, since, in a way, the spectacle is like a shadow play, an art form that has always interested visual artists. We see something, such as two young contemporary women talking, but dimly. The gauze curtain used by late nineteenth-century theatre innovators to suggest the remote, romantic atmosphere of symbolist drama, such as plays by Maeterlink, is re-invoked with modern technological means. I don’t forget that the first definition of the word “projection” in the Oxford dictionary is “the throwing of an ingredient into a crucible, especially the casting of the powder of the philosopher’s stone.” This alchemy is certainly present in Wodiczko’s visual vocabulary, as are a host of highly literary associations. An early work, “Homeless Vehicle” from 1986, takes its principal form from a supermarket shopping cart, such as the homeless often use, but, in his fantastic invention, calls to mind Mother Courage’s cart. (He is not without humor, obviously, and has a Rube Goldberg streak that is very entertaining, as when he calls upon “Evicts of all cities, unite!”) You can take the Marx out of Marxism, but you can’t take… He grew up in Poland, after all.

Wodiczko uses what he calls “the seductive power” of grand spectacle to make his cunningly disguised indignation plain, but indignation, that most honorable of emotions, underscores every public projection he has ever made. The elegance of his presentations only serves to entrain the viewer into his world of unacceptable transgressions of the humanist principle.