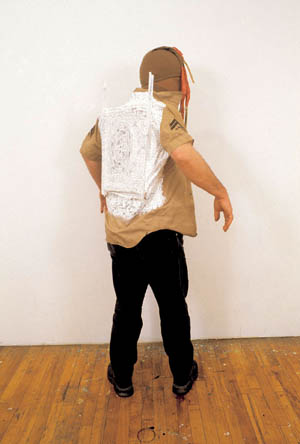 Kim Jones’s latest show at Pierogi is this month’s most compelling and satisfying exhibit on both sides of the East River. Having been exposed to his work rather late, only seeing his last two shows with John Webber in the late ‘90s before he joined Pierogi in 2002, I came better prepared this time. A great new chapter in Jones’s epic has opened its pages to public view, reminding us that his on-going impulse towards idiosyncratic narrative should be read in its totality.

First of all, I believe that Jones has thus far created an unusual and complex body of work that demands a new reading within the context of the recent history of Body Art. In spite of the artist’s insistence that his Mud Man persona is a walking sculpture rather than a performance—he has repeatedly rejected the notion that his work is shamanistic, like that of Joseph Beuys—I take my chances relating Jones’ work to the history of performance. Body Art evolved out of happenings, Fluxus, the Vienna Actionists, as well as some aspects of Beuys’s ritualistic performances. As an art form its mature phase culminated in the 1960’s and 1970’s, giving critical recognition to the works of Carolee Scheemann, Chris Burden, and Bruce Nauman.

With Carolee Scheemann, one thinks of the influence of abstract expressionist gestures via de Kooning’s famous remark, “Flesh is the reason why oil painting was invented,” which she brilliantly transformed into her own style of performance, placing erotic expression and feminism at the center of her work. Chris Burden’s art is characterized by his theatrical display of the ambiguity between aggression and narcissism, masochism and sadism, testing the ethical limits of the use of the body. Bruce Nauman, on the other hand, took the opposite path—a much more subversive and ironic use of the rhetoric of Body Art. In the last few decades, these artists have shifted their emphasis from the body onto other forms of concern. A notable exception to this is Marina Abramovic, whose performance last year at Stux Gallery was utterly resolute.

Jones’s relationship with his body, on the other hand, is closely related to his profound life experience, drawn primarily from a childhood bone disease, during which he had to wear a leg brace and was confined to a wheel chair between the ages of seven and ten, as well as from his army service in Vietnam as a Marine from 1966 to 1969. Nonetheless, Jones’ work also has a profound art historical lineage. His primal and very personal identification with his materials recalls the work of Eva Hesse, and the formal aspects of Jones’s sculpture and performance share similarities with the work of Bruce Nauman, Vito Acconci, and Chris Burden. What makes Jones’s work remarkably moving, however, is that unlike many artists who might have been in the Army and have since become either too political or not political enough, his work proceeds from lived experience to a broader worldview that has the greatest possible discretion and humility. One also feels the personal weightiness with which the artist transgresses; part Stone Age, part apocalyptic, a vision beyond man’s Tower of Babel.

War Paint is Jones’s latest body of work. The show consists of eight painted and sculpted varieties of shirts, trench coats and jackets in the front room, eight works on paper in the back room, and an army of rats gathering at their headquarters (a tabletop in the corner of the back room) to head out along the ceiling to the big wooden beam in the front room, where they begin the mission of their secret society. I found myself feeling claustrophobic yet also hypnotized by the interlocking forms of grid, maze-like patterns that were plastically painted onto the surface. It’s the labyrinthine city beyond the landmarked construction by the cunning Athenian Daedalus and his son Icarus. In perhaps a veiled reference to the myth, many of the rats are equipped with coat hanger wings.

More importantly, in War Paint the concept of time is perceived through the process of revision. Only by erasing previous formations of the symbols of the X’s and dots are replacements allowed to appear. There is a palimpsest that traces their movement in time. Jones’ sense of time does not, however, pertain to duration but rather to the timelessness that perpetuates the never-ending cycle of man’s destructive tendencies. Again, by constructing his-tory at his own pace, a synthesis of the external and internal world that embraces both the personal and the universal, Kim Jones’ endurance of physical impediment and capacity to survive infused with art, has imparted his wisdom upon our own reluctance to cope with our defeats as well as our defects. Hence Jones’ impact on our visual vocabulary is one to be studied for a long time. I long for his retrospective next year at the University of Buffalo.

Jones is most at home at the intersection of music and art history, building hybrids of the two while questioning her place within the legacy of the latter: How does the work of a Black woman artist fit into a tradition dominated by white men? Turning music into objects and objects into auditory experiences, she troubles the boundaries of any category in which she might be contained and does so with elegance and control.

Bill T. Jones Dancing Through Disease in Can You Bring It and Afterwardsness

Can You Bring It: Bill T. Jones and D-Man in the Waters is a new documentary about Bill T. Jones’s seminal, AIDS-era work. Afterwardsness, his newest production, reflects on the COVID-19 pandemic and ongoing assaults on Black lives. Viewed together, they offer seemingly contradictory but ultimately profound lessons on dance’s role in moving through personal and societal grief.