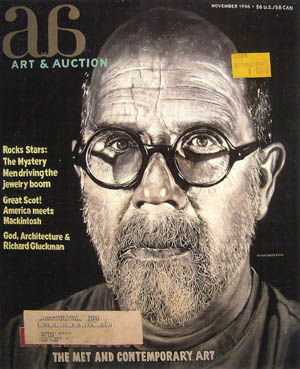 Chuck Close’s iconic self-portrait is visible from the sidewalk on Rivington Street outside of the Bond Gallery where Joseph Karoly’s exhibition of frescoes hangs. Once in the gallery it becomes clear the face is actually the counterfeited, enlarged cover of an Art & Auction magazine from 1996 painted in trompe l’oeil. An apocryphal yellow Strand bookstore price tag of $1.50 catches a piece of Close’s forehead at the upper right hand corner of the magazine, and the postal address label of the original subscriber is painted in on the lower left.

To a jaundiced eye, the recognition of Close’s reproduction might inspire immediate associations with other theory-based, reflexive art practitioners such as Sherrie Levine, Louise Lawler, and the dozens of others that have since followed. Karoly has indeed been making art about art for decades, and, while “Smart Art” has been reduced to a formula by some, the prevailing economic contradictions that inspired such critiques haven’t dissipated. If anything, the art world has become more cynical and commercial to a growing number who have come to accept institutional critiques as nothing more than toothless academic alibis for producing objects.

The question arises as to whether a strategy of appropriation, such as Karoly’s, can still sabotage the commercial mechanisms without simply perpetuating them, and, whether it is incumbent upon an artist to adjust to these rising levels of cynicism. Like most conflicts, the answer is somewhere between the two. Karoly expects more than a knee jerk reaction to his work, and rewards the critical eye with subtleties that are unavailable from the sidewalk outside.

The price tag and postal sticker across the face of “Art & Auction, Chuck” are purposeful signifiers of past incarnations in the life of this particular image: from the original photograph of Close’s face to the fresco as it inhabits the Bond Gallery wall (and adjacent to this text block as well). Karoly chronicles the image through at least six incarnations of life, describing a kind of purgatory where Close’s face floats hopelessly between banal depiction and dehumanized logo.

Across the gallery, “The Wheels of Commerce” continues this line of thought. Like its neighbor, this painting has an implied history embedded in it. The book depicted is tattered and worn. The text indicates that the volume is the second in a series that describes the history of commerce—one that, in Karoly’s eyes, would seem to move implacably and deterministically, and has been better for business than art.

Both of these pieces have a kind of absurdist resignation that distinguishes them from more sober and humorless relatives. One doesn’t get the impression that Karoly’s work is admonishing or preaching from an ivory tower. Rather, he finds interesting ways to demonstrate that a depiction will inevitably become an image, and all images inevitably continue to transform.

The humor in Karoly’s work is most apparent in “Signal to Noise.” The fresco is a recreation in plaster and paint of a plywood wall, presumably from a construction site, posted with fliers and covered with graffiti. A bill announcing a Robert Rauschenberg retrospective at the Guggenheim is partially stripped away, and three “Signal to Noise” stickers run horizontally across its middle. The entire composition, from the wood grain, to the spray painted tags, is painted in fresco, a technique generally avoided by postmodernists. There may not be a more counterintuitive process with which to reproduce such an image, but it succeeds in adding an ingenious, contradictory slowness to the piece.

The show offers additional frescoes that are similar in size and subject and replete with subtleties that turn art and image making upside down and inside out. A lot of familiar theory foregrounds the work in this exhibition, and an equal amount of individualized humor and inventiveness keeps it fresh. This is the kind of playfulness that has the potential to meet those desensitized and disaffected by theory and appropriation half way.

Sitting down with the Rail’s Joseph Pomp, Ashley McKenzie discusses music, neurochemistry, and relationships in the process of creating her new film, Queens of the Qing Dynasty.

This conversation for the Brooklyn Rail’s New Social Environment series brings together several people connected to the recent exhibition of drawings by the self-taught artist Joseph Yoakum at the Museum of Modern Art. The exhibition represents a landmark in contemporary efforts to bring to a wider public the work of this remarkable American artist.

Elbert Joseph Perez’s sobering humor and historical fixation instill an anxiety-inducing literalness, crying out from somewhere between the borrowed opulence of historical, still-life masterpieces, and a gravitational interest in the concept of “existence,” described by the artist as a “baseline misery.”

Joseph E. Yoakum: What I Saw

Yoakum’s landscapes have been well-known in the world of folk and outsider art for four decades, but their enfranchisement by the larger art world has taken longer, even though the work of this Chicago artist was recognized and collected by a group of trained artists in the same city almost as soon as it appeared in the 1960s.