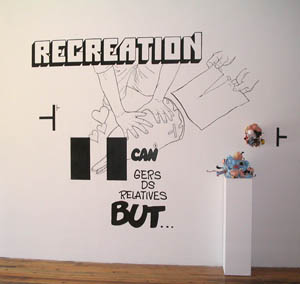 The title of Jon Paul Villegas’s exhibition, My Genitals’ Genitals: More in love with the idea of not being in love with the idea than with the idea of not being in love, suggests some of the calculated chaos of the show. Opening with an untitled Sarah Sze-like sculptural installation, Villegas’s chaos is far slicker than the outright hemorrhaging of visual ideas in Matt Bua and Jesse Bercowetz’s “Bowie Knife” next door at Jack the Pelican. Villegas maintains a tight formal control over his abstract forms that strongly resemble the work of Matthew Ritchie. What differentiates Villegas from his most obvious influences is an irreverent sense of humor about his subject and his formal language.

While the show is billed as a site-specific installation, the real subjects of the show are the melting sculptures and graphic wall paintings. Appropriately, one of the wall paintings includes a Rorschach-like image that seems to urge the viewer to freely interpret the visual juxtapositions. The opening sculpture, a carefully orchestrated web of plastic netting, poles, and abstract forms is the most derivative piece in the show, clearly borrowing from Sze’s pseudo-scientific installations, though here the subject appears to be sports and leisure culture. On the wall directly behind it, the word “recreation” appears in bold, sign letters, framing the rather athletic sculpture. More interestingly, a densely layered, black-and-white painting of fractured portraits and text on the opposite wall serves as a background for a melted, blue-hued, organic sculpture. The theme of contrasts between angular, graphic elements and the organic, fluid quality of the sculptures runs throughout the exhibit.

The small sculptures, composed of colorful, abstract forms melded with anatomical parts, are alternately realistic and cartoonish. One wall montage features a photograph of a kitten juxtaposed with a sculpture that shares similar cartoon, plastic eyes. The image and object create a grotesque cuteness that gleefully suggests the organic mess might be part kitten. Villegas gives all of the sculptures an anthropomorphic quality by fusing animal anatomy from wings and fins to internal organs in the sculptures. One work in particular resembles nothing so much as a melted Goofy figurine with his nose and tongue still intact.

In another section of the installation, two fused heads layered with dripping forms are set on a table covered with faux grass against the backdrop of a large wall painting. The Rorschach butterfly hovers over a black pit. The possibility for disaster in the intersection of science and nature seems to fascinate the artist, whose mutant hybrids are laced with a kind of morose paranoia about the body. Where Matthew Ritchie depicts an abstract, genetic universe with reverent elegance, Villegas subverts rationality making comic absurdities out of genetics and science. It’s the critique of seriousness, not the formal strength of the work, that animates the sculptures.

In the back of the gallery, another installation with monstrous looking heads made of helmets of jet black hair sit in front of Villegas’s graphic motif of a right angle juxtaposed with a flame-like symbol. A plastic toy camera observes puddle black blobs on an adjacent pedestal. On the wall behind it, the exclamation “CRIPS!” gives the scene a violent edge. One of the heads looks something like Darth Vader with a monocle, and the lack of color in this particular grouping casts a darker tone. The playfulness of the other sculptures gives way to surveillance and paranoia. The shift in tone also reflects a certain kind of fatalism about progress behind the bright colors and cartoon features, suggesting that in the end there will not be happy clones, but gross failures.

Ultimately Villegas seems less interested in directing viewers toward any conclusion than confusing their narrative expectations. The installation is a contrast of rigid geometries with fluid bodies that teem with visual associations. The only drawback to the otherwise fascinating installation is the overt stylistic debt to Sze and Ritchie, despite an implicit critique of their “serious” use of abstraction. It’s a compelling compliment to the far more ramshackle grotesquery next door at Jack the Pelican.

Luigi Ghirri: The Idea of Building

The exhibition is curated by the artist Matt Connors, and comprises 29 vintage prints together with archival material, handmade exhibition invitations, books, commercial work, presented in vitrines. The title of the exhibition is taken from a text by Ghirri’s widow, Paola Ghirri, in which she describes his attitude to not only printing—each print is handmade and unique—but also to his construction of images and fascination with hand-built objects. The photographs, usually taken frontally, have often been taken for montages, when in fact the various parts of the composition existed in place out in the world already, and are simply framed by Ghirri using the photograph’s own rectangular limit.

Stephanie Dinkins: On Love and Data

For Dinkins, one of the main problems with AI is the existing data it uses.