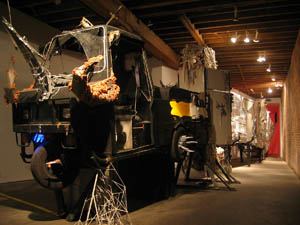 All-American aggression, bloody violence, and heavy metal pandemonium are the stock-in-trade of Braggin Rites, an installation of irredeemable junk fashioned by Jesse Bercowetz and Matt Bua into what they claim to be the world’s largest Bowie knife.

In 1830, Jim Bowie collaborated with an Arkansas blacksmith to develop a weapon with unsurpassed effectiveness in stabbing, slashing, and skinning. Its innovations included a heavy, broad steel blade, sharpened on both edges, and a curving, upturned tip. Reputedly, its fame spread after Bowie used it to defeat a team of hired assassins by decapitating one, disemboweling another, and splitting the skull of a third like a coconut.

Bercowetz and Bua channel Bowie’s spirit into a 120-foot-long agglomeration of debris bristling with implied violence. A full-size tin canoe impersonates the blade, a gurgling refrigerator-cum-iron maiden doubles as the hilt and a smashed police scooter is hoisted high overhead as the handle. Dozens of festering appurtenances cling to the assemblage’s span, choking Jack the Pelican’s alley-like space with the likes of matted animal pelts, amputated extremities, diarrhea-hued bilge water, and tomatoes dumped like viscera into a filthy metal sink. Here and there, spiky, biomorphic whatzits poke out of crannies, and bright red lumps of wood dangle like blood-soaked bladders or pieces of a heart. And on a tiny video screen, a sawtooth blade slides into somebody’s mouth, digging out chunks of unspeakable pink matter.

But the visuals, graphic as they are, are almost secondary to the soundtrack—a whining, thumping, grating, snapping, whooshing aural barrage that burrows under your skin without mercy. Heaps of audio equipment, including an impressive collection of electric guitar effects pedals (and slapdash facsimiles), are scattered throughout the artwork, offering further evidence, if any were needed, of its shrieking teen Goth mindset.

The show’s press release heralds Braggin Rites as a “demonic hoodlum’s opera” and a “fierce, gung-ho homage” to Bowie, the “legendary frontiersman of the West and time-honored hero of the Alamo.” Not mentioned are Bowie’s pursuits as an illegal slave trader who died, lest we forget, defending the sovereignty of Texas as an independent slave state. Nor are his relations with Native Americans (he was involved in a fierce battle near San Sabá, Texas, in 1831), but the genocide perpetuated by his fellow expansionists is the subject of Iron Maiden’s “Run to the Hills,” one of the songs embedded in the installation’s soundscape.

With apparent indifference to intellectual consistency, the gallery statement cites Thor Heyerdahl’s Kon-Tiki expedition as the source for the tin canoe and describes the images decoupaged onto its kidney-shaped paddles as portraits of “pioneers, revolutionaries and martyrs,” including Osama bin Laden, George W. Bush, Jesus Christ crowned with thorns, and Klaus Kinski assaulting Werner Herzog in the publicity still from My Best Fiend.

So what, exactly, is going on here? Especially given that Kon Tiki wasn’t a canoe, but a raft?

A work as resolutely confrontational, abrasive, and tacky as Braggin Rites (the press release situates it within “the anti-craft tradition”) seems to go out of its way to detonate critical evaluation with its gross-out effects and gleeful embrace of troglodyte brutishness. It’s anti-art in the real sense of the term. It makes no attempt to recontextualize or refine its throwaways for the cultivated eye. Its piles of garbage never lose their identity as rotting trash, and its conceptual underpinnings, such as they are, don’t appear to rise above adolescent hijinks. Its public face is of a piece with its subject matter—violent and vile, unthinking, uncaring, unknowing.

Yet there’s definitely something smarter and cannier at work. The choice of the term “hoodlum’s opera” is revealing. It brings to mind John Gay’s Beggar’s Opera and its direct descendent, Brecht/Weil’s Threepenny Opera, both of which use the character of Macheath to satirize the moral hypocrisy of the ruling classes. Are Bercowetz and Bua positing Jim Bowie as America’s Mack the Knife – a hoodlum lionized as a hero simply by landing on the upside of history? If we mythologize psychopathic degenerates like Bowie, what is the net effect on our national psyche? And how farfetched is it then to assign Bush and bin Laden to a pantheon of pioneers, revolutionaries and martyrs?

An enormous knife symbolizing our romance with violence may be as literalist and vulgar as Mount Rushmore, but it offers a more honest assessment of the course of empire. What begins—in the spirit of Kon Tiki—as an innocent, almost mystical human impulse to seek beyond the horizon, tragically and inevitably succumbs to corruption and greed, slavery and genocide, government-sanctioned torture and an incipient police state. If Bercowetz and Bua don’t bother to edify their vision in accordance with the strictures of high art, well, it’s not a pretty picture.

Pandemic Poetics: An Eulogy and Manifesto in an AntiBlack World

By Gwendolyn Baxley and Yolanda Sealey-Ruiz

We both turn to poetry for refuge and reflection during these multiple pandemics. When Blackness means possible execution, poetry becomes both eulogy and manifesto: we put our pens to pads as a means to not only mourn and give tribute to Black life lost, but also declare and celebrate the audacity and fearlessness of Black life (and Black afterlives) even in the face of violence.