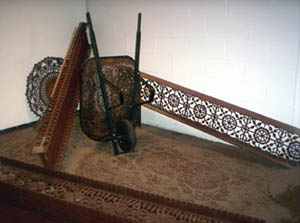 Sometimes I encounter an artist whose work provokes a visceral reaction that haunts me for days. Cal Lane in Engaging Ephemera instigated exactly that response, and while she is one of three artists on display, she undoubtedly dominates the show. Part of a small exhibit at Williamsburg’s Stay Gold gallery that brings together three MFA grads from Purchase College State University of New York, the exhibition purports to investigate the “ephemeral, each [artist] uniquely touching on aspects of temporality, femininity and memory.” Framework established, each artist approaches the theme from a vastly different perspective and all rely on layering as if that was the key to the momentary or temporary.

Slovenian artist Ksenija Cerce is the least developed of the artists here. Her three videos are dawdling and self-indulgent. They present little insight, offering tightly cropped images of water and animals accompanied by vaguely audible murmuring. They loop endlessly in a dream-like trance.

Joelle Jensen, on the other hand, has a fascinating perspective on a seemingly banal object (the family photo album) but then proceeds to concoct images that wane from the sophisticated—“Repose: Mother 1961–2005” (1961–2005)—to the jejune—“Repose: Bath 1973–2004” (1973–2004). If some of the photographs appear interesting, their flattened color and overexposed highlights, while mimicking vintage photos, detract from the objects. The disproportionate scale between the older and newer images comes across as distracting. I couldn’t help but wonder if the older snapshots that inspired the newer restagings were even necessary. When the historic directly melds with the recent, like in her loving portrait of her mother, it galvanizes the image and hatches something new.

That being said, the show is Cal Lane’s alone. Her steel sculptures are stunning and infectious. They are stepped back and arranged on a podium of stenciled dirt. The thin soil sheet, like a magic carpet, sets the stage for a series of fantastical metal objects. Based on the visual vocabulary of David Smith and Anthony Caro, her language demonstrates accents of Richard Serra with the sensibility of Meret Oppenheim. While her work is steeped in the canon of twentieth century sculpture, the lessons are never heavy or precious. By transmuting traditional floral patterns onto stereotypically male objects (I-beams, shovel, wheelbarrow, manhole covers), Lane has fashioned stimulating objects with varied associations and straightforward names. Her alterations make seemingly immutable I-beams into folksy objects as fragile as icing, while “Shovel” (2005), by contrast, appears worn and sentimental.

Each hole Lane punctures in her objects is a loss of sorts, symbolically as much as physically. Loss is an emotion Jensen also explores: the subjects in her posed recreations appear more distant and less engaged than their dated models. With each incision a little is taken away from Lane’s metal works, but something greater is added—each object in its entirety is a wonder. Arranging multiple objects together, the collective effect is compounded. “Wheel barrow” (2005) is rich in associations with memory and ephemera. Cut up to look like Swiss cheese, its metal carcass resembles a strainer rather than a container and its pristine wheel, handles, and chassis underline the contrast. Lane wrestles her objects into a form of poetic stasis; by forcing us to confront the irrational pairings of incised pattern and industrial objects something new blossoms, somewhat inexplicable but wonderful.