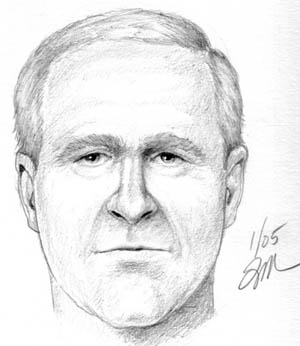 A nation’s construction of an enemy “other” often serves less to define the latter than the former’s identity. The works in this politically charged group show interrogate various notions of how mechanisms of representation reflect this process. From Les LeVeque’s sampled Lawrence of Arabia highlighting the film’s colonial perspective to Alia Hasan-Khan’s postcard montage depicting the internal struggle of Arab individuals to negotiate their dual status as both citizen and “potential” enemy in the US, the show reveals how fear of the other drives nations allows them to create historical narratives that justify terrible means.

LeVeque’s “Dramatically Repeated Lawrence of Arabia” deconstructs David Lean’s colonial narrative revealing it as pure Orientalism. The film is reduced to a rapid montage of stereotypical images straight out of a Delacroix painting by sampling one frame every two seconds, effectively negating the film’s heroic narrative. The montage reveals how superficially Arab culture is represented in a film that won Best Picture and remains a classic in the Western cannon. Without the dialogue, the film becomes a study in stereotypical images of white clad Modernity amid dark Arab tribalism; LeVeque’s intervention strips away any dramatic justification for its colonial portrayal of Arab culture.

Inversely, Hasan-Khan’s postcards in “Greetings from…” (2005) work from within Arab culture, recounting the individual perspectives of Arab-Americans and travelers encountering fear and apprehension in the U.S. While the narratives are unique, they sadly have become familiar as the US resorts to racial and ethnic profiling in the War on Terror. Individuals are dehumanized and reduced to a set of obvious physical traits. In one narrative, an Arab jogger is stopped by police after his daily jogging over a bridge prompted reports of a “suspicious man.” The jogger simply started wearing USA t-shirts and the harassment abruptly ceased. The comically simple solution reflects the arbitrary and superficial nature of racial profiling. The deeply flawed logic of judging people by ethnic or racial traits has historically led to genocide, and the narratives convey a scary reality; yet Hassan also restore and privilege the individuals’ perspectives and humanity.

In an ironic and damning video of US world hegemony, “The Speculative Archive,” Julia Meltzer and David Thorne recast Syria as a colonial superpower through a deeply ironic monologue in a segment of a longer project. Syria, which has increasingly earned the ire of the Bush Administration for its foreign and domestic policies, is presented as a mighty nation that has colonized America and the world. A professional actor delivers earnest accounts of Syria’s triumphs from the Syrian World Cup to the launching of a space shuttle. The comic inversion of Syria as superpower is tempered by the looming possibility of a U.S. invasion. The actor’s refrain “I’m Syrian, Lucky Me” takes on a terrible meaning, as the feeling of being a target of a military superpower starts to sink in. The ironic reversal of power presented in the video at least suggests the internal fear of war and occupation in Arab nations that the U.S. now represents.

While Arabs are currently the most visible US enemy, Leftist South American rebels and drug dealers have also been viewed as enemies of Democratic Capitalism. Carlos Motta’s damning multimedia installation “SOA: Black and White Pain-ting” (2005) features a book of shadowy, filtered images of atrocities committed by South American soldiers trained in the U.S. at the School of the Americas, or the School of Assassins. In an accompanying audio speech, the artist subtly altered the graduation ceremony address by switching the pronouns from first to third person. The narrative shift, where there is no I or we, acts as a denial of any culpability. The criminal acts committed by the soldiers trained at the SOA are dismissed as the speaker quickly shifts to describing the honorable actions of the SOA graduates in fighting Marxist-Stalinist dictators and stemming the tide of narcotics trafficking. Obviously there is no mention that the U.S. supported dictatorships that committed atrocities under the banner of fighting communism at any cost, nor that the war on drugs is a result of U.S. domestic policies of criminalization. The absolute and anonymous confidence with which the speaker addresses the graduates of SOA is starkly contrasted with the shadowy horrors of Motta’s images. Together, the montage is a damning critique of the ideological justification of U.S. intervention in South American politics.

Hasan Khan’s installation presents narratives of the abuse of illegal immigrants attempting to cross the U.S.-Mexican border. Immigrants have achieved an enemy status in the border states, where under the guise of domestic security, largely white, civilian militias are patrolling with tacit government support. Khan’s digital, red line drawings and documentary narratives shed light on the dehumanizing abuse of Mexicans crossing the border to work in a US economy dependent and exploitive of their cheap labor. It is appalling that the administration can simultaneously propose amnesty to working immigrants, while allowing human rights abuses and civilian militias to patrol the borders. Both of Hasan-Khan’s works suggest the underlying fear that non-white populations pose to white America.

The largest installation in the exhibit, Siemon Allen’s “Cards (Enemy)”, covers the back gallery with several series of collectable cards that cover every major US military campaign from WWII to the war on terror. The most recent series of cards, Don’t Let it Happen Here by Monster Wax, classify a host of un-American activities throughout the world including same-sex marriage. The cards are plainly conservative, Christian propaganda, labeling unacceptable practices, morals, and ideologies of different cultures. While the rest of the installation details military enemies, allies, and equipment, this last series presents a dizzying array of enemies frightening to conservative, Judeo-Christian ideology. It should scare more than the youthful collectors it is aimed at.

The seven artists in this exhibition—all born in mainland China between 1979 and 1987—are represented by nineteen works that range from video to performance to installations, digital art, painting, and more. Each tells a different story with wit, curiosity, techno savvy, painterly skill, and/or sociability.