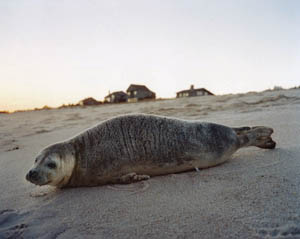 It is odd that in the height of the art market there is still a split between contemporary art galleries and photo galleries. How did the big print German photographers like Ruff or Gursky and the rote allegorical set-up photographs of Crewdson and crew come to stand for contemporary art photography while the contemplative black and white modernists and documentaries wind up in the stuffy 57th street suite? But perhaps this gap is closing finally, if Dan Torop’s exhibition Estimated Landscapes is any indication.

From his current show at Derek Eller Gallery, it is apparent that Torop does not share the contemporary art world’s fascination with the garish and gargantuan. His installation of seventeen small photographs may at first sight seem meek, but he is in search of the same things that the Gurskies and Crewdsons are both trying to find through their special effects and muscle-bound printers: the fleeting chance to capture the sublime.

At first glance, each of Torop’s prints that dots the walls of the gallery tend to look like an everyday snapshot. However, the images depend on the functions of the artist’s camera to elevate them above the norm. In a way, he subtly engages Walter Benjamin’s dogmatic essay “Art in the Age of Mechanical Reproduction,” that staple of art students, which bemoans the end of art’s aura through of the advent of technologically reproducible media such as film. But Torop depends on his camera to produce an aura of the sublime. He manipulates the camera to create a spiritual fix over what would be regarded as a mundane image. By changing the camera’s depth of field, a forest scene flattens; calibrating the exposure of a darkened landscape captures Christmas lights on a holiday house as if it were on fire; and using of various lenses warps a rather flat landscape into a hill.

This would all look like photographic tricks appropriate for a skate zine, except Torop is out to capture a condition of depression that he can freeze for all to look at and study. Keeping everything in crisp focus, Torop records each one of his subjects, from the beached seal to the fallen forest, as helplessly distant and simultaneously crystal clear. One of the aspects of photography that Torop uses to great effect is what can be seen as a glass barrier between the viewer and subject. This is a feeling familiar to the melancholic, and Torop’s technical control of his camera records it and then elevates it to the uncanny. In “Amagansett Seal,” we come upon a beached seal in early morning. Torop clearly finds the vulnerable nature of this situation appealing and photographs the seal staring into the camera with what seems like a compassionate plea. As viewers, we are all caught in a moment of complete helplessness. Torop does not focus on the nature of the seal. Rather, he is interested in the distance between his photographic subjects and his viewers. He seizes upon a moment where the subject of the seal is just as important to the picture as each grain of sand on the beach. This is the general rule for all the work in the show: from the fog drenched forest to the infinite horizon of a seascape, each photograph gives you complete detail, but evokes a dazed feeling of distant immensity.

What separates Torop’s photographs is his trust in his camera and his ability, as a photographer, to find a sincere image. In this, he shares a likeness to some modernist photographers rather than to his more conceptually oriented contemporaries. Torop’s search for these fleeting moments from around the country conjures up a connection to a lone traveling photographer like Robert Frank. His photos, like Frank’s, express the need to be in the right place at the right time with the ability to recognize it and capture it. Unlike these wandering modernists, though, Torop is not out to document the social or political atmosphere; his photographs feel too personal for that, and therefore have an elevated emotional tone.

Can the regular art-going audience accept this type of sincerity? The sophisticated art viewer is accustomed to ironically clad contemporary art works. They are used to a Hollywood-like streaming narrative or a blunt one-dimensional concept. Furthermore, with what seems to be a million galleries in a six square block area, is there really any time to dwell on a picture? Is there time to understand melancholy? What the Gurskys and Crewdons have going for them is that they stop an audience dead in their tracks. The biggest voice seems to win and in an era of the large format art fair pieces, Torop’s small prints do not pack a punch, but rather, require patience. Contemporary art is now about wall space, much like it was a century and a half ago in the French salons. In an age of the ever-expanding mega-space, the fear is that Torop’s work will all but disappear from sight and memory even as his exhibition is still up.

Landscapes of the South

Landscapes of the South, a group exhibition on view at Mendes Wood DM, presents 27 compositions in which creators respond to natural settings. Diversity is found not only in artists’ origins, eras, and intents, but in their formal choices; the landscapes exhibited are nostalgic and deadpan, impasto and serenely smooth.