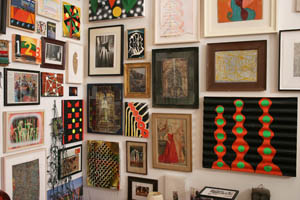 On the way to or from Chris Martin’s exhibition, you notice a large painting in red and black, “Manikarnika Ghat (Dedicated to Frank Moore)” (2002-2003) mounted high on the outside side wall of the gallery, placed exactly where someone would display a billboard advertising the latest gadget, food, or reality show we need to know about if we are to consider ourselves informed. For Martin, I think “Manikarnika Ghat” is a sentinel and, given the subject—Frank Moore (1953–2002) was an artist, AIDS activist, and visionary who helped create the red ribbon symbol for AIDS awareness––a prayer and a memorial. Compositionally, Martin’s painting consists of long vertical and short horizontal red bands in a black field. Across the street from the gallery, on a boarded-up building, the artist added three paintings to the one he put there a few years ago, its red now faded. In writing terms, this is the prologue and the coda; paintings out on the street framing whatever one encounters inside the gallery or greeting you when you leave.

In the front room there’s a couch, coffee table, and bongo drums facing an untitled two-panel painting in dark thalo green and white that is just shy of ten feet high and twenty-four feet long. A long white canoe-like shape hovers in the black. A similar, smaller shape, sharply cropped by the painting’s top edge, pushed into the black. In the back room, two large paintings, one in vibrant primaries and green and the other in largely primaries and black and white. “Four Days at Asi Ghat Varanasi-Staring into the Sun” is twelve-feet high and nearly ten-feet wide, and “Ganges Sunrise Asi Ghat Varanasi,” is ten-feet high by twelve-feet wide. The painting’s title is written along the bottom of both of the paintings in the back room, giving them a diaristic feel. “Four Days at Asi Ghat Varanasi-Staring into the Sun” is taken up by a large red rectangle with wide red bands extending to the painting’s bottom edge. In each of the vertical red bands, Martin has painted yellow circles without repeating the spacing or number in the adjacent bands. The top of the painting is blue, and the space between the bands is green. In “Ganges Sunrise Asi Ghat Varansai,” Martin stacks long horizontal ellipses, each smaller than the one above it, against black-and-white horizontal bands. For all their symmetry, these are not symmetrical, static paintings.

Opposite the two large paintings, in a large alcove-like space, Martin has arranged on both the wall and floor nearly two hundred numbered items, including paintings by the artist, by his friends, by people he respects, photographs, postcards, newspaper clippings, anonymous drawings, letters, prints, collages, an untitled work that consists of acrylic on a banana, and another of paint on a leaf, anonymous works, a large stuffed animal, a drum, and other things that one is apt to gather up and even hold onto during the course of one’s life.

For all the literal stuff in the show, there is purposeful clarity to the thinking that was announced by Martin’s placement of paintings on the street. Art should exist in the world, and what goes into making art, all the things you use, collect, and keep because they have some talismanic power, can be revealed. Why hide or cover your tracks? “Manikarnika Ghat” is as good as any of the large paintings inside, and it has the same dimensions as “Four Days at Asi Ghjat Varanasi-Staring into the Sun,” so Martin’s diaristic inclusiveness and sense of community wasn’t an empty or purely theatrical gesture. His work is insouciant, at once playful and dead serious.

In the three large paintings in the gallery, Martin uses an irregular geometry to explore the phenomenon of light reflected on water, a solid constantly changing material structure. One of his recurring subjects is the moment where light becomes liquid, and liquid becomes light, the shattering of each by the other. It is a moment that embodies a state of heightened seeing, as well as an unstable, constantly transforming world. In a number of the smaller works in the alcove Martin draws or paints the mushroom Amanita Muscaria, the red mushroom with white spots that one probably first encountered in Disney’s Fantasia or on a Christmas card. The Amanita Muscaria has been the subject of much speculation at least since 1968, when Gordon Wasson proposed that it was Soma, the god/plant responsible for the ecstatic states described in the Rig Veda.

In his paintings, Martin, who worked in an AIDS hospice for many years, brings together his interest in painters as different and distinct as Forrest Bess, Alfred Jensen, James Harrison, Myron Stout, and Paul Feeley, his life as a caretaker in a hospice, his knowledge and study of Eastern religions, and his love for fellow artists. There is an openness and daring in his work that is rare. He has painted on corrugated fiberglass and his shirts. He has used fluorescent paint and insulation foam. Mallarmé said that the world existed to end up in a book. Martin, I think would disagree. For him, the world, and here I mean its things, exists to become part of a painting.

Since the late 1970s, Martin has been patiently working his way through various artists by absorbing and echoing their vocabulary. One sees traces of Guston, Feeley, and Jensen, among many others. Each allusion is a kind of love letter, a way of praising. He is playful, but not ironic. One could say that early on, he understood abstraction to be postmodern and immensely flexible; that it could be fruitfully used to drink up the work of others. In this exhibition, all that looking, thinking, and using has reached a new level. Whatever the sources of his vocabulary, which include forms and color, it now feels distinctly his. Someone should give him a show in a museum.

Thurston Moore still has a noisy, abstract approach to punk rock, but in his solo career he’s picking up bits and pieces of other styles and influences via collaborating with other musicians.

10 artists present the theme “Make Our Differences Our Strengths” using 14 billboards, with six more locations to go up on December 28. Seeing the exhibition requires a long afternoon of driving on suburban roads, with the aid of GPS.