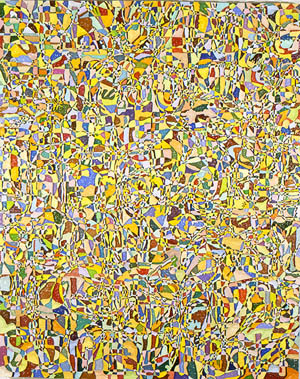 Where do language art and biology meet? Can they be seen to have a common root and might any one of the three exist in its particular form contingent only on the forms of the others? Art, one might say, would be impossible without language, which is predicated on biology. Art, another might argue, preceded language, both of which have become forces affecting biology. One place the three certainly meet is in Bruce Pearson’s paintings on display at Ronald Feldman Gallery.

For Pearson language is primary. He begins his now well-known Styrofoam reliefs by carving text—sentences and fragments that often double as the title for the piece—into the surface of the Styrofoam. These texts provide the impetus for the richly textured and colored surfaces that comprise his finished paintings, which is where biology comes in. The incessant caving gradually breaks the surfaces up into a network of interlaced planes that summon imagery of cellular proliferation and aerial views of geography, the latter reference intensified by the deeply pitted topography of the painting’s physical surface. The whole has a hallucinatory effect that, in this case, amounts to prismatic vision—the world seen through a turning crystal. Vision in Pearson’s paintings is rearranged into a new and beautiful symmetry of two unlikely orders: the mandala and the grid.

“Uncovering facts they would prefer you never hear about” a painting in sticky sweet primary and secondary colors employs the grid on a slight diagonal. Its evocative title is but a prelude to the thing itself, which, if you are not steady, may cause you to physically sway. Across the room is “A displaced game of cat and mouse,” which could derive from a picture of the planet seen from a pole, the fragmented land resolving itself into pattern. It is based on the mandala, its structure radiating from the painting’s center in golden yellow over blue and purple.

The grid and the mandala are two ostensibly opposed motifs. The grid is the field of power. It subsumes form and localizes power with the seer. The mandala centers power in the object. It is the fearsome face humankind gave nature to appease it. It radiates power and humans bow before it. It is not so much the wedding of these poles in Pearson’s painting that is strange as that wedding’s base in language. He seems to suggest that these perennial forms, on which artists have relied to give body to their visions for centuries, may be seen to have a root in the abstraction of language. So if one examines language with care, one might find in its structure forms analogous to those of art and science. There is, it would seem, a deeply rational root to Pearson’s art.

Or is there? Maybe we’re just being pushed through the looking glass into a world where our vision is so beautifully impaired that all things just seem one. In “Encyclopedia 3 (relative calm sounds of gunfire and footsteps sadly familiar sheds some light),” all trace of the underlying text has been eradicated and Pearson’s carving reaches an intermittent pitch of delicacy, like eddies in a stream. Its mooring in language comes undone, no rational underpinning can be found for this painting. Its colors seem never to repeat and one has the delicious feeling of having fallen into the rabbit hole for good.

The eight dancers spend most of the hour-long work moving together in lockstep, or in small orbiting groups. When dancers break apart from the cluster, others rush to join them, or assist when another falters.

Julian Schnabel’s inventive exuberance shows no signs of flagging. Whether harvesting the awnings from the stands of fruit vendors in Troncones, Mexico, where these paintings were made, and transforming the irregular shapes into spectacularly asymmetrical shaped canvases, or, as here, using velvet as his surface, he finds ways to impose his abstract will on whatever medium he chooses.

These writings grasp the most seemingly insignificant detail and weave an entire text around it. We might direct our attention to just plain objects, knitting texts about them, concentrating our focus upon them, or simply collecting them for no particular reason.