Love Poem (10 Minutes After the End of Gravity) 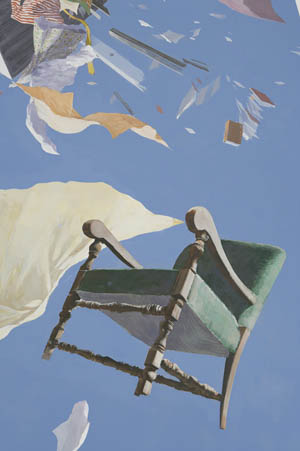 Detail of Adam Cvijanovic, “Iolanthe” from “Love Poem (Ten Minutes After the End of Gravity).” Photos courtesy of the artist and Bellwether, New York.

For Adam Cvijanovic’s third solo show at Bellwether Gallery, Love Poem (10 Minutes After the End of Gravity), he has created two monumental paintings that hark back to the triumphant decoration of late eighteenth-century Rococo. Painted on Tyvek, the indestructible, fibrous, synthetic used for FedEx envelopes and house construction, the works are affixed directly onto the wall; it is a process the artist terms “mobile frescoes.” They are ambitious works and it is easy to understand why Bellwether’s Becky Smith has been trumpeting the show all summer. For those who have followed Cvijanovic’s career at the gallery, it is refreshing to see the transformation of this adroit painter as he addresses increasingly complex compositions. Earlier large-scale murals tended towards straightforward subject matter—natural landscapes, newsworthy (but normal) scenes (baseball games, spring break on a beach, the launch of a space shuttle, etc.)—and their power and impact was a result of the scale rather than the scope of their content. Like many of the photo-realists, much of Cvijanovic’s work documents rather than deconstructs the conditions of contemporary American life, and while the verisimilitude is always engaging, there is often little beyond the feat of his execution.

The current installation, however, is pure imagination. It presents an unattainable situation made evident through the artist’s own musings, and it is vividly explored through a series of elaborate and detailed studies, one of which is also on view. In the front gallery, Cvijanovic evokes Tintoretto’s exultant heavens through a twelve-foot oval ceiling painting, Iolanthe (2005), where spatial boundaries dissolve in the illusionistic openings of the pale blue sky. Instead of clouds and angels, his is a scene of domestic disarray where a bed, linens, chairs, and the like float through space, propelled by unknown forces. It is neither frenetic, nor frightening, but rather more dream-like, as if the objects of one’s life could simply float away, and wouldn’t it be lovely to watch them go.

The explanation for this scenario is manifest in the rear gallery where a similar sense of remove is in evidence. Titled Untitled (from Love Poem) (2005), the scene is intended to depict Los Angeles ten minutes after gravity has failed, and it is the show’s raison d’être, a seventy-five foot mural that wraps three walls. It depicts an untenable combination of chaos and calm: ranch houses float through the sky; cars fall out of garages; books, shop signs, furniture, palm trees, and the other banalities of quotidian suburban life swirl through the sky. It is expertly executed, and Cvijanovic makes excellent use of the confined gallery space so that one literally feels sucked into the blue sky, surrounded, and pulled into the scene as water spirals towards a drain. The painting crescendos in the rear right corner where a refrigerator spews a rainbow of groceries, swirling out in their branded glory amidst a swell of buildings that cruise through the sky and off into the horizon.

Described in the press release as “a supernatural, impossible and metaphorical event” it is impossible to read the work at this moment without imagining the very real, almost supernatural force—and impact—of Hurricanes Katrina and Rita, on the southern shores of the . In the aftermath of this destruction—and the unaccounted for female tempests that raged between Katrina and Rita—Cvijanovic’s work takes on an entirely new dimension. It is uncomfortable and disorienting to delight in his scene of mayhem, and his fantasy situation reads like a surreal perversion. The scene is an absolute counterpoint to the reality we in have witnessed from afar. Everything about his mural, from the colors to the distinctly upper-middle class habitats he presents, is at odds with the national experience of recent weeks which, like the putrid waters of , have been tainted in all ways by conditions of race and class. The paintings, fairly or not, are suddenly charged with accounting for the dissonance between reality and representation of destruction, and their appearance at this moment gives them a prescient, uncanny air.

As has often been noted, the ability to make photographs as large as easel paintings allows them to compete visually with paintings. But of course that practical consideration merely identifies the necessary condition for the success of this novel artistic genre; it doesn’t tell us how to interpret these works.